Second-in-command of the Mavericks

Vile, or "VAVA" (in Japanese: ヴァヴァ, VAV), in the Japanese version, is a recurring antagonist in the Mega Man X series. He is a ruthless and psychotic Maverick who serves as Sigma's second-in-command, as well as the second archenemy of both X and Zero after Sigma. He is the secondary antagonist of Mega Man X, and a major antagonist in Mega Man X3 and Mega Man X8.

Vile was created as a battle Reploid for the Maverick Hunters. Although his powers were great, a failure in his circuits in his electronic brain made him crazy, never differentiating friends and foes and destroying both of them. He was condemned for imprisonment, but Sigma releases him when he starts his rebellion against the humans, making Vile his right-hand. He attacks the city on his Ride Armor and is challenged by X, but easily defeats him. When he is about to dispose of X, Zero rescues him and Vile flees. Once X and Zero finds Sigma's hidden base, Vile challenges them once again, trapping Zero and forcing X to fight him. He once again defeats X, but Zero escapes the trap and blow himself in an attempt to kill Vile, but he only manages to destroy his Ride Armor. X then awaken his hidden powers and fights Vile, this time finishing him for good. In Maverick Hunter X's Vile Mode, an unlockable bonus mode, Vile took a different path. Instead of joining Sigma's rebellion, Vile decided to prove to Sigma that he was better and more powerful than X. After fighting X on the Central Highway, he decided to battle against Sigma's followers to gain more power and reputation. Though most of the eight main Mavericks were rather friendly to him (and offered to let him leave), he destroyed all of them and obtained their powers in order to create new weapons. Afterwards, Sigma extended an invitation to fight against him in order to prove whether he is indeed worthy. Ultimately, he infiltrated Sigma's fortress and fought his way through it until he was cornered by X and Zero. Both of them battled him at the same time, yet were defeated by him.

After defeating both of them, Vile admitted that X, whom he hated more than anyone else, had grown stronger, but was still a wimp to the very end and never had the power to change the world. He then proceeded to beat up X's already injured body by kicking it around and then stomping savagely on X's head while angrily demanding that he show him his true power. He was then attacked by a weakened Zero before he could deliver the finishing blow with his cannon, who grounded him (as well as commented that Vile's comments of changing the world was "Maverick talk") before he was hit by X's charged shot. When he awakened, he was accompanied by Sigma. Heavily damaged, he asked what was so important about X. Yet, instead of answering, Sigma asked Vile why he did all this and whether he wanted to stand before him as a Maverick Hunter or kneeling before him at his mercy. Upon this question, Vile wasn't unable to comply and started laughing, stating that he wasn't actually sure about it himself. He was then left by Sigma (though not before radioing some of his men to "retrieve Vile"). As he walked away, Vile started not caring for what happens to the world and stated that by defeating X, he proved the right of his existence, that he is Vile. But as he reached out to stop Sigma from leaving, his functions ceased, and he was left frozen in his desperate position.

Vile is later resurrected by Dr. Doppler, who wants Vile's help to stop X. Vile agrees to help him, but alerts that he will make things his own way. He faces X in a junkyard, using a new Ride Armor. Once again defeated, Vile activates a bomb to blow the entire place and flees, but X manages to escape. He would challenge X again in Doppler's lab, now with an even more powerful Ride Armor, but he is once again destroyed.

Much time later, he is once again resurrected, this time by Lumine, helping him in faking his own kidnapping. He faces the Maverick Hunters X, Zero and Axl many times, being always defeated. When they take the Jakob Orbital Elevator to Moon, Vile challenges them again, fighting with all his strength, but is defeated and run to Sigma's Palace in Moon. There, he fights the Maverick Hunters in a new Ride Armor, being again destroyed. In the Hard Mode setting, Vile is still alive long enough to take down the other hunter (The other character that the player is not using; whoever delivers the final blow to Vile progresses in the Sigma Palace), though the other hunter is later revealed to still be alive and arrives to help during the final battle against Sigma.

Vile is revived again in his original state and joins the union of the villains from across time and space. Vile takes command over World 1. After OVER-1 defeats Chill Penguin, Spark Mandrill, Storm Eagle, and Flame Mammoth, Vile comes out to confront him but is defeated once again.

Vile appeared in "Mega X", the 26th episode of the Ruby-Spears Mega Man animated series, voiced by Lee Tockar. He came from the future along with Spark Mandrill to steal Lightanium (which, according to Mega Man X, is worth billions in the future) from Dr. Light's newly opened Plasma Power Plant to finance Sigma's war against humanity. He's depicted as near-invincible in the cartoon, as Dr. Wily's robots and even Mega Man are no match for him (mostly because Mega Man's cannon couldn't so much as scratch him). However, he himself was no match for Mega Man X (some lines in the episode heavily implied that Vile had a grudge against him). Vile is depicted as extremely arrogant, looking down on both humans and robots of the present and calling them puny.

He and Spark Mandrill both appear to Wily near the start of the episode and force him into helping them after easily defeating his robots. The two Mavericks later encounter Mega Man and Roll and easily defeat them, but are driven off by Mega Man X, who followed them back from the future. Dr. Wily reveals his plan to rob the Plasma Power Plant to Vile by flooding the plant in belief that it would stop all its defenses. Vile actually likes the plan (commenting it wasn't bad, "for a puny human"), though after breaking a dam and flooding the plant, some defenses were still active. Vile and Spark Mandrill, however, easily break through them. They successfully steal the Lightanium, along with some materials Dr. Wily needed for a new laser weapon. Though Vile got what he came for, he decides to remain in the past a little longer to destroy Mega Man X. Wily unleashes his new laser weapon on Mega Man and Mega Man X, who avoid getting hit by it, and X destroys the weapon with his own version of Snake Man's weapon. Vile and Spark Mandrill open a portal to return to the future with the Lightanium, but X pushes them both through leaving the Lightanium behind.

Vile appears in the Rockman X and Irregular Hunter Rockman X manga, playing a role similar to the one he plays in the games.

Vile (with his original appearance and Ride Armor) also has a brief appearance in the last issue from Dreamwave Productions' Mega Man comic, where he catches X with a cable from his Ride Armor, but Zero appears and saves him, giving X a time machine while he fights against Vile and other Mavericks.

Vile is a complete psychopath and insane fighter who destroys everything for fun. He is very destructive, arrogant, and violent, so he has a very unstable and enraged mind. Though he used to be a member of the Maverick Hunters, he never once considered himself as one, and had a habit of not accepting orders from anyone except himself, which often resulted in fierce and argumentative exchanges with his commander and partially to his own arrest and labeling of being a Maverick.

Because of an irreparable short circuit in his electronic brain, Vile developed a strange and almost sociopathic passion for hunting down Mavericks and totally annihilating them, while causing as much damage as possible on the territory. This also includes innocent bystanders and comrades alike. This passion is also what may have led to his own arrest and labeling of being a Maverick.

In all incarnations of the character, Vile is also deeply grudging and vituperative against X and looks down on him for the fact that despite X having a lower rank than him, he received more attention. He is also a traitorous Maverick of both the Maverick Hunters and of the Mavericks. Vile always hates Storm Eagle as much as he hates X. 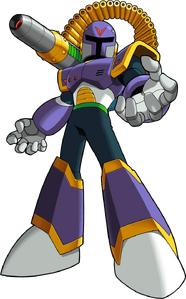 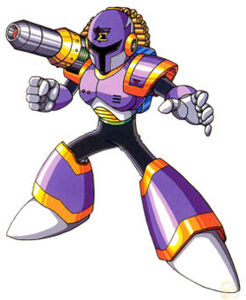 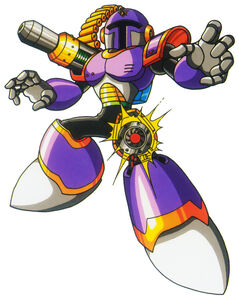 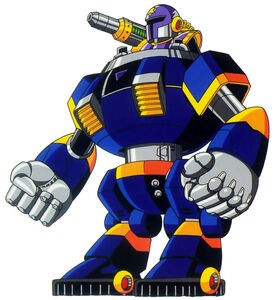 Vile in his first Ride Armor from Mega Man X.. 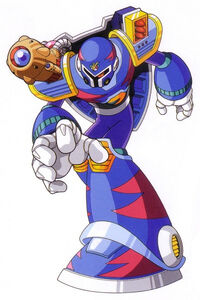 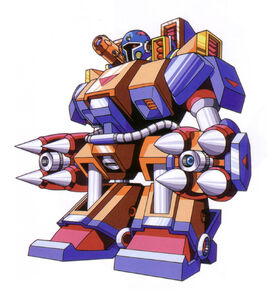 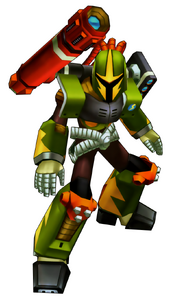 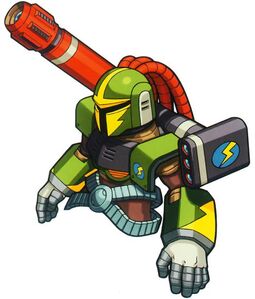 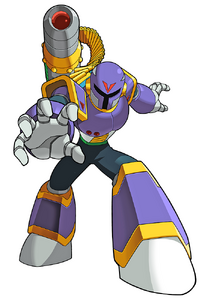 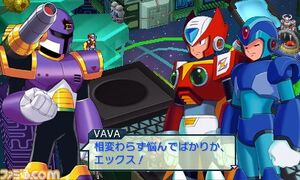 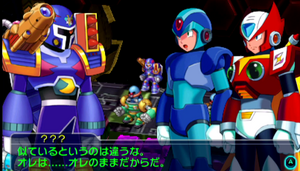 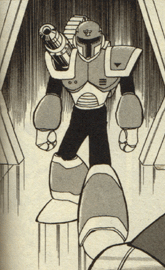 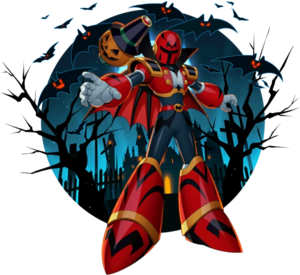 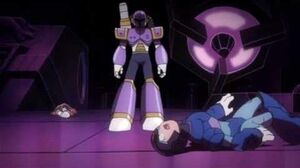