The Villainous Vultures were one of the two opposing teams in Total Drama All-Stars.

In "Heroes vs. Villains", the team is formed by Chris McLean, appointing Duncan, Gwen, Heather, Jo, Lightning and Scott to the team. Jo complains that the team is one member short prompting Chris to include his robot. Excluding Gwen (who though a goth is not a villain and was wrongly placed on the team by Chris to stir things up), everyone on the team seems proud or accepting of their villain status. The team soon develops a power struggle for leadership, while Gwen tries to encourage the other members of their team to work together. Scoffing in response, the others admit in a confessional that they don't trust anyone on the team and only do things to benefit themselves. When Chris orders the teams to pick a driver, Scott, Jo, and Lightning wrestle for the position until Jo gains it by lying about being a champion shopping cart racer.

During the challenge, the Vultures take an early lead on the Heroic Hamsters until they eventually caught up due to Scott's unwillingness to participate due to his selachophobia. Later, Lightning accidentally pushes the robot into the water and is attacked by the sharks, releasing Alejandro, which shocks everyone, especially Heather. He catches a key which ultimately ends up being the correct one, causing them to win the first challenge. They later attended the elimination ceremony where Chris asked for a volunteer. Lightning agreed to the task which was to spend the night in exile at Boney Island for a chance to find the McLean-Brand Chris Head.

In "Evil Dread", the team is seen relaxing at the hotel spa, except for Lightning, who is still at Boney Island. Gwen, Duncan, Jo, and Scott are at the dining table where Scott wonders if Lightning found the statue and Jo tries to convince the team to vote him off at the first opportunity. Meanwhile Heather and Alejandro talk while Alejandro is getting a massage. Lightning returns just in time for the next challenge. The whole time Heather and Jo compete for leadership over their team while Heather remains suspicious as to whether or not Alejandro's legs actually are "deep asleep" and Lightning gets distracted by himself constantly. They think they found all their pieces before the other team but a piece turns out to be missing, thanks to Lightning's counting error. Said error proved to be costly as the Heroic Hamsters won the challenge. Gwen accidentally causes Courtney to be pelted with garbage, prompting Chris to manipulatively tell Gwen that she really is "on the right team". At their first elimination ceremony as losers, it came down to Jo and Lightning. Since Lightning proved to be the bigger liability in the challenge, Lightning was the first villain voted off and take the Flush of Shame, but before telling them the team they'll regret it for voting him off.

The guys complain about the quality of the cabin while the girls argue with each other in "Saving Private Leechball". Jo, Heather and Alejandro wants Gwen to create an alliance with them because Duncan would follow Gwen. Gwen realizes the trio's intention but is happy because it puts her in a position of power. Gwen is saddened to learn that everyone on her team (egged on by Chris and by Courtney) believes she is a villain and was purposely trying to be mean to Courtney, even though this is really not the case. Eventually the Vultures lose due to arguing and their lack of teamwork, in the end Jo was voted off. Meanwhile, Duncan is sent to the Heroic Hamsters for sacrificing himself for Gwen during the challenge while Courtney is sent to her proper place on the Vultures for her heinous actions and was exposed as a fraud during the challenge as she was using the Hamsters as pawns and using Sam as shield to protect herself. Heather was in the bottom two that night, but was safe.

In "Food Fright", the Villainous Vultures are coping with yet another loss and Courtney is already causing trouble. During the first challenge, the teams must eat pancakes and go through the obstacle course without vomiting. The Villainous Vultures do pretty well but they end up losing thanks to a bee stinging Alejandro's face and Sam managed to land on the ground first. However, Chris revealed that Sam stuffed a few pieces of the pancakes in his pockets in case he had to return to exile on Boney Island, since his team didn't eat the whole pancakes and awards the Villainous Vultures their first victory since the first episode. Scott agreed to say on Boney Island due to him thinking he can find the Immunity Idol easier and quicker.

In "Moon Madness", the Vultures start out at the spa hotel with Courtney missing Scott while Heather and Alejandro argue. They go out for the challenge were Heather gets affected by the Blue Harvest Moon and is turned really nice. Courtney and Gwen begin to bond over this. They reach a bridge were Gwen doesn't cross and instead goes her own way. Scott goes across the bridge first and runs into a beaver after being affected by the Blue Harvest Moon and breaks the bridge. Heather is then revealed to be faking her new attitude. All of the team (except for Gwen and Courtney) crosses the finish line. They are then fighting a duck affected by the Moon until the Moon is turned back to normal and the two cross the finish line before Mike. At the elimination ceremony, Scott goes back to Boney Island. Cameron intends to quit the game, but instead of taking the Flush of Shame, he is spared by Chris and sent to the Vultures (even though Cameron is not a villain).

In "No One Eggspects the Spanish Opposition", the Villains are sent in the loser cabin. Alejandro, Heather, Courtney, Gwen, Scott, and Cameron then exit the cabin. Chris announces the challenge. The villains start off at a good start. They continue winning, while Heather reveals she has found the Invincibility Statue. She then tries to hide it, knowing there may be snoops nearby. Heather found some eggs and was working on returning to Chris. The Heroes had eggs, while the Villains only had one, that they missed. In the end, The Heroes win. In true Total Drama nature, the elimination scene is very dramatic. Alejandro received every vote except for his own. However, he reveals that he can walk and has the statue. Heather is eliminated that night, but not after getting angry at Alejandro.

In "Suckers Punched", they open up with the other villains shunning Alejandro. Chris then announces the challenge, and they all collect over there to see what Chris has to say. Chris gives an explanation of the challenge. It is revealed that Cameron is scared of Izzy. Most noticeably, Gwen and Courtney make up. But, they still have some fighting to do, and then, Gwen got her one true wish after all. The Villains choose who goes home. Gwen chooses Sierra.

This list shows why the members of the Villainous Vultures are on this team due to their past actions:

NOTE: Most of the members (except Cameron, Duncan and Gwen) were considered as the main antagonists of the show, but this was part of the plot to hide and release the true main villain. 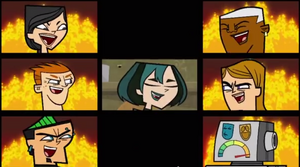 The Villainous Vultures laughing evilly at Gwen when she suggests working together as a team. 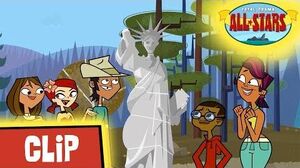 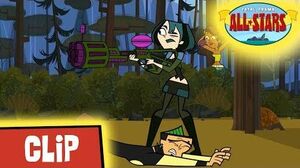