The Winter Knights, book two of The Edge Chronicles

Vilnix Pompolnius was a major antagonist in book five of The Edge Chronicles by Paul Stewart and Chris Riddell. He was a scholar of Sanctaphrax who wanted to become rich by creating stormphrax, a harnessed lightning which could create safe, renewable energy and cheap power for everybody.

He started life as a knife-grinder on the streets of Undertown, along with Millcrop, a fellow knife-grinder. He would sharpen knives for a whole host of shady clients, no questions. Eventually he found a smashed telescope on the street which came from the professor of Darkness up in Sanctaphrax. He repaired it, adjusted it, and improved the device, and returned it to the professor. The professor was impressed and hired Vilnix as his apprentice in the school of Rain. He befriended villainous types in Sanctaphrax, such was his nature, and the never-ending plotting suited him well.

In Sanctaphrax, Vilnix met Quintinius Verginix, a sky pirate and son of captain Wind Jackal, who tried to befriend Vilnix, believing him outcast and friendless. But Vilnix did not want Quint's friendship, he wanted no friendship. He scorned Quint and cursed him and said he would live his own way.

He and Quintinius made it into the Knights' Academy where they were trained to become stormchasers and go hunting for stormphrax. Unlike Quintinius, Vilnix was mortified that he had become a mere Knight, he wanted to be a professor, safe out of harm's way. Vilnix realized what a fool he had been by blindly accepting an offer, and he plotted revenge, which came in the form of his pet prowlgrin cub almost being starved to death. Quintinius went to check on the cub one morning because Vilnix was being lazy and he was caught by the professor, who went into a fury when he found about Vilnix's treachery and laziness. He hauled Vilnix out by his collar and whipped him across the cheek after berating him about his uselessness. Quintinius realized he had sold Vilnix out and felt bad, but Vilnix continued being mean to Quint afterwards. Suddenly he changed to being Quintinius's friend, saying the other academics were either too idiotic or stuck-up to talk to him but at least Quintinius was willing to talk. One day Vilnix caught Quintinius with a furnace-builder whom he had befriended and scorned him, saying "Making friends with mere furnace-makers are we?" to which Quintinius coldly said "At least I have friends."

This was at the time Sanctaphrax was being frozen eternally by a trapped cloud-eater, a beast from Open Sky which had been drawn in by Linius' scientific experiments. Quintinius sought the cloud-eater, and found it was trapping itself against Sanctaphrax, expelling cold air in the form of blizzard. Quintinius freed it and it flew back to Open Sky.

Vilnix Pompolnius tried to poison Quintinius, but the professor of Darkness saw this treachery and demoted him. He would not cast Vilnix out of Sanctaphrax completely; he just hoped his demotion would teach him a lesson. It didn't.

Quint's knighting ceremony came and he was to be sent to the Twilight Woods to hunt the Great Storm and get stormphrax. Vilnix had been experimenting with stormphrax weeks before, and, when he made some real stormphrax at the right time, at twilight, he tried it again a few seconds later, only to have the whole place blow up and killing all his apprentices. Vilnix noticed when his blood fell into the water it absorbed it and became gold. He wondered how he could replicate such a liquid to give to everyone and increase his fortune.

Vilnix interrupted Quint's ceremony, he said all the traditions of sending knights stormchasing were worthless, and that it would be much better if they had free stormphrax at hand. Vilnix would supply them with stormphrax and build more chains for Sanctaphrax to prevent its destruction, and the Leagues would give him money and power to do so, if the academics of Sanctaphrax made Vilnix Most High Academe and Ruler of Sanctaphrax. Vilnix's offer was hastily accepted by all academics but Quint, who cursed Vilnix Pompolnius and said that he would rue the day forever. Quint said if he couldn't carry his mission as a knight, he would do it as a sky pirate, and cursing Vilnix, he left.

Vilnix became Most High Academe, kicked the professors of Light and Darkness out of their school and threw them into a tiny office in the backstreets of the city. Vilnix Pompolnius started a dictatorship, and his underlings called it a vicious circle because the more stormphrax was sold, the more water was used up, the more slaves were needed for chains, and the more the Leagues paid him. Vilnix was, literally, with his head in the clouds, because he was in the highest room of Sanctaphrax which was already in the sky any way. He was ignorant of the sufferings of his clients and merchants on the ground.

The Leagues slowly got suspicious of Pompolnius and soon realized he never intended to pay them and in fact he had no stormphrax at his disposal. They were horrified to see the Treasury in Sanctaphrax was, in fact empty. All across Undertown people were trying to recreate Vilnix's first experiment only to have it blow up and kill both of them or kill their colleagues. The Leagues and the professors of Light and Darkness got wind of this, and soon realized stormphrax was non-existent in the Treasury. When Twig returned to Sanctaphrax with a full chest of stormphrax and the Treasury guard saw the truth that the room was empty, he cursed Vilnix and said Vilnix's days were numbered.

A bar-owner, Mother Horsefeather, a shryke, attempted to lie to Vilnix by sending her apprentice, a waif named Forficule, to Sanctaphrax to lie to Vilnix about sending Quintinius to the Twilight Woods and the professor of Darkness' false death to stop him interfering, but crafty Vilnix Pompolnius knew it was a lie so he tortured Forficule by harnessing him to a torture chair and knocking a rod against a skull cap which amplified sound, horrible for Forficule because he could read minds and sound was hurtful for his ears. Vilnix Pompolnius tortured the waif in a long, drawn-out torture (made worse because Vilnix wore steel, spiked shoes, a hair-robe, and a spiked skull cap to hurt him deliberately and make him angry) and when Vilnix deemed himself satisfied, he ordered Forficule to be thrown out of Sanctaphrax with his ears chopped off - the worst punishment for a waif.

Vilnix awoke one morning, in the bliss of luxury, confessing to his manservant Minlius that he had conferred with the Leaguesmaster, (which was a very stupid confession to make) because Minilius told everybody in the Hall about the evil act, saying he had colluded with criminals and poisoned the ecosystem. He experienced what seemed like a long earthquake, and, furious, Vilnix marched to the Great Hall to find answers when the shaking stopped. He was told, to his dismay, that it was the city being saved and weighted down by the stormphrax that he, Vilnix, was meant to possess. Minilius said "I was only sorry that when I was shaving your head I didn't have the courage to slit your scrawny throat!" Finally outdone, Vilnix backed away, and then started running for his life. Twig, who had just been knighted, angrily ran after Vilnix, chasing him through the corridors and streets of the never-ending city and into the basket to Undertown. Vilnix leapt in the basket and rudely dismissed the goblin controller, but the goblin kindly let him in the basket and smirked mischeviously when Vilnix went in. Soon, the ropes cracked and broke and Vilnix fell many hundreds of miles to his death. 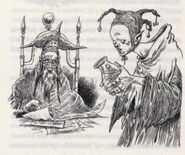 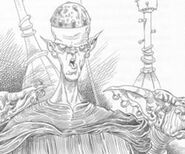 Vilnix Pompolnius' death
Add a photo to this gallery
Retrieved from "https://villains.fandom.com/wiki/Vilnix_Pompolnius?oldid=3349344"
Community content is available under CC-BY-SA unless otherwise noted.