Governor of Mars
Leader of the Mars Colony Security Force

Destroy the rebels and the alien reactor to secure his reign of Mars (failed).

Vilos Cohaagen is the main antagonist of the 1990 film Total Recall.

He was portrayed by Ronny Cox, who also played Dick Jones in RoboCop.

The planet Mars is now a settlement and tourist attraction, but it could not have become this without the usual pitfalls of colonization and interplanetary conflict, all filled through greed, power, deception, and government cover-ups. The Governor of the planet is Vilos Cohaagen, a corporate dictator with a nasty temper and insatiable greed who runs the planet with an iron fist. His biggest obstacle in the way of complete control over Mars is a group of early settlers who were exposed to the Mars atmosphere over time because of cheaply-made domes. These people and their offspring have become mutants, and many of them have gained supernatural powers, including psychic ability. These people refuse to be swept under the corporate rug, but Cohaagen has hatched a plan with his most trusted friend Carl Hauser to have the Mars Colony Security Force to rid Mars of the mutants forever.

Hauser essentially had his identity erased from the world and from his own mind, and a new one was injected. He walks the Earth now as Douglas Quaid, a mild-mannered husband with incredibly huge muscles and a strange accent. And through a series of coincidences (he thinks), Quaid finds himself on the run from the government, having discovered his whole life has been a sham. He must get to the bottom of this, and he's got a nagging feeling the bottom of things will be found on Mars. During the beginning of the film, Cohaagen is addressing about the importance of the terbinium ore needed to make oxygen for the planet, stating that he will not let Kuato and his 'terrorists' threaten the operations. He later contacted his right-hand man Richter on Earth, after learning from Richter's wife Lori that Quaid has went to Rekall and has popped his memory cap before killing Harry and his friends. Despite Richter's attempts to kill Quaid, Cohaagen angrily demands him to take Quaid alive, threatening to 'erase his ass' if he defies his orders again, much to Richter's dismay, even after Lori and Dr. Edgemar end up being killed by Quaid as they attempted to take him into custody.

As Quaid travels there to discover more clues to his true identity, he hides away in Venusville, where Richter orders his men to kill several people when they refuse to speak of Quaid's whereabouts. Eventually, Cohaagen shuts off Venusville's ventilation following the death of Ritcher's right-hand man Helm, so Richter has Captain Everett to call all their men back. There, Quaid encounters the mutants and eventually meets their spiritual leader Kuato. The psychic stresses to Quaid the importance of unlocking the memories trapped in his mind, and through deep meditation, he finds out an important secret: deep underground, a giant alien reactor made out of terbinium - perhaps millions of years old - was discovered by Cohaagen and his men. Its purpose was most likely to generate a breathable environment for the planet by melting a huge glacier of ice below, which will release the oxygen that will be enough to neutralize Mars' toxic atmosphere, even though some scientists have theorized that it would just ignite all the terbinium on the planet and send it into a planetary meltdown. Because of his desire to maintain his abusive monopoly of selling air to the citizens of Mars (regardless of the effects that it's causing to them), the greedy Cohaagen decide not to turn the reactor on and instead plans to blow it up before the resistance can get to it.

Eventually, Cohaagen's forces manage to track down Kuato and the entire Resistance and eliminate them (with the help from the treacherous Benny), with the exception of Quaid and Melina. A victorious Cohaagen then explains of his plot to Quaid about being used by both him and Hauser to lead them to Kuato, right before he orders Hauser's memory to be reimplanted back into Quaid and Melina to be programmed as Hauser's slave. However, this only prove to be his biggest mistake as this drives a furious Quaid, now fully committed to defeating Cohaagen and his vile plans for planetary domination, to free himself and Melina from custody. After Quaid and Melina kill the rest of Cohaagen's men (including Benny and Richter), Quaid heads over to the reactor, but Cohaagen arrives with a gun, preparing to kill him and blow the reactor up with a bomb. An arriving Melina shoots Cohaagen, who eventually activates the bomb, which Quaid throws away into one of the walls, causing an explosive decompression. As a result, Cohaagen is jettisoned onto the planet's surface, where he painfully gasps and chokes to an ugly death before Quaid finally activates the reactor, causing the oxygen to be released into the atmosphere, rendering it breathable and freeing the entire Mars colony from Cohaagen's control. 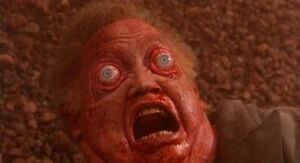 Cohaagen's death as he chokes in the toxic Martian atmosphere.