Killing anyone who directly or indirectly obstructs his mission

Kill all four witnesses in the Felix case (succeeded).

Vincent is the main antagonist of the 2004 action thriller film Collateral. He is a professional yet sociopathic hitman employed by nefarious drug lord Felix Reyes-Torrena to kill four witnesses and the prosecutor within the case against him.

He was portrayed by Tom Cruise, who also played Lestat in Interview with the Vampire, and Les Grossman in Tropic Thunder.

Vincent's mother died giving birth to him, while his father was an abusive alcoholic who died of liver failure. Vincent later joined the United States Army, becoming a member of the Green Berets.

Sometime after being discharged from the Army, Vincent joined a Private Military Company, through which he obtained his contracts. Just prior to the beginning of the film, Vincent was hired by high-ranking members of what is implied to be the Sinaloa Cartel to assassinate four witnesses and the prosecutor for a grand jury indictment against Felix Reyes-Torrena, a member of the cartel operating the "El Rodeo" nightclub, a drug-distribution front in Los Angeles.

Vincent arrives in LA when a taxi driver Max Durocher takes him for a ride, during this Vincent admit he did not like Los Angeles very much. Max was shocked when a drug dealer Ramón Ayala falls down into the taxi and Vincent revealed himself as hit man hold Max as hostage to covered up Alaya's murder, during which he killed his targets include Peter Lim as Max watching helpless and feared his mother will be targeted by Vincent after that.

Max come to realized that Vincent's last target was Annie Farrell, who had earlier rode in his cab. with escaped from police officer and he tried call her by telling about Vincent about to kill her at office. Though he successfully foils Annie's escape before cornering her in her office, Max manages to reach them in time before shooting Vincent to save Annie. Wounded yet alive, Vincent peruses the fleeing duo and eventually corners them on an LA train. This forces Max to face Vincent with a police gun, and the two instigate a gunfight with each other that culminates with both men running out of their ammunition. When attempting to reload, Vincent is revealed to be fatally wounded and he finally admits defeat by sitting down on the train awaiting for his inevitable death. Max joins him and the two exchange a final discussion before Vincent reflects on his earlier statement about a guy who died on the MTA and sorely questions him "Do you think anyone will notice?". Shortly afterwards, Vincent stares at Max one last time before his head drops down, signaling his death. As Vincent dies, Annie joins Max and the two stare at Vincent's body before abandoning him on the train when they get off at the next station. The film ends with the train leaving with the deceased Vincent still inside it as dawn emerges.

Vincent is gray-haired with stubble. He wears a gray suit, a gray tie, and a white shirt; a minimalist outfit that was custom-made by "the best tailor in Kowloon" to be both fashionable and nondescript. His appearance can be compared to a wolf, and may even reflect his personality.

Vincent appears to be warmhearted, friendly, and affable when you first meet him; beneath the facade, however, he is a cold, ruthless, and calculating sociopath. He believes that human nature is intrinsically evil and that, deep down, people care only about themselves.

Vincent is also very careful and meticulous, preferring to accept his contracts and interact with his employers through middlemen. Nevertheless, Vincent enjoys improvising and takes pleasure in adapting to changing situations.

Vincent is an expert at handling firearms and hand-to-hand combat. He is also adept at blending into the environment, and is particularly able to improvise if a situation takes a turn for the worse.

Vincent about to get into Max Durocher's taxi

Vincent revealing his identity to Max mere moments after murdering one of his targets.

Vincent kills some muggers who started to provoke Max.

Vincent being driven by Max to his next destination.

Vincent waiting for Max to refuel his taxi at a petrol station.

Vincent speaking to his next target moments before killing him.

Vincent after saving Max's life in a nightclub shootout.

Vincent, during his nihilstic quote.

Vincent chasing after Max and Annie in a subway station. 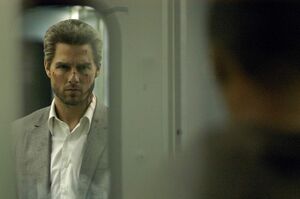 Vincent at the train station. 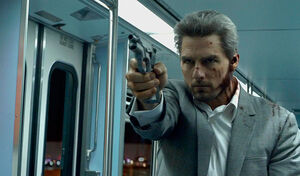 Vincent, giving up and accepting defeat.

Vincent sitting down on a train and dies following a confrontational gunfight with Max.
Add a photo to this gallery
Retrieved from "https://villains.fandom.com/wiki/Vincent_(Collateral)?oldid=4381524"
Community content is available under CC-BY-SA unless otherwise noted.