Take the "white devil" to trade him (both failed)

He was portrayed by Simon Callow, who also played Tree Lorn Acre Slitheen-Blathereen in The Sarah Jane Adventures.

After failing the rescue attempt of a raccoon in the Himalayas (a parody of the opening to the film Cliffhanger), Ace Ventura undergoes an emotional breakdown and goes on a personal soul-searching quest by becoming a Tibetan monk. He is approached by Fulton Greenwall, a British correspondent working for a provincial consulate in the fictional African country of Nibia. Being that Ace's influence is extremely rambunctious and disruptive to the monastery, the Grand Abbot eagerly gives Ace excuses by which to justify his departure.

Greenwall asks Ventura to find a sacred animal of the Wachati tribe called Shikaka, which disappeared shortly after being offered as a wedding dowry from the Wachati Princess, who is set to wed the Wachootoo Prince, thus resulting in Brotherhood between the two rival groups. Shikaka, which is a great white bat, is a sacred animal for the Wachati and Wachootoo tribes of Nibia; whenever its very name is spoken, the tribesmen must bow. Accompanied by his capuchin monkey, Spike, Ace travels to Africa and returns to his pet detective work.

After arriving in Nibia and meeting with the head of the consulate, Vincent Cadby, Ace begins learning about his case as well as the possible suspects. Ace, normally an animal lover, must overcome his fear of bats in order to continue studying the case. He travels to the Wachati tribal village, where he learns that if the bat is not returned in time, the Wachootoo will declare war on the Wachati tribe, as they believe Shikaka's disappearance to be a curse on them all. Much of Ace's activity involves eliminating various obvious suspects—illegal animal traders, poachers, even a Safari Park owner and enduring the problems of dealing with the growing escalations between the Wachati and the Wachootoo, the latter having dubbed him as the "white devil". This proves difficult, and is made more so by other incidents including attempts to kill him, and the Wachati princess' attempts to seduce him.

Reduced to the limit of his ability to solve mysteries and coming to the conclusion that the Wachati possess something valuable to man, Ace consults the Grand Abbot via astral projection. Advised by the Abbot, Ace finally deduces that Vincent Cadby has taken the bat and hired Ace as a cover for his own crimes. Cadby plans to let the tribes destroy each other so that he can than take possession of their land, using the numerous bat caves containing guano to sell as fertilizer, a $1.4 billion industry. When Ace confronts Cadby with this knowledge he is arrested by tribal security chief, Hitu, who turns out to be one of Cadby's lackeys, but Ace calls an elephant to escape, and then summons herds of jungle animals upon the embassy, crushing Cadby's house. He tries to shoot Ace with a shotgun, but he is thwarted at the last minute by Greenwall, who honestly cares for the Wachati. After waking up, Cadby manages to escape during the confusion with the bat in a car, but Ace chases him in hot pursuit with a Monster truck. Ace throws the truck's cigarette lighter at Cadby in an attempt to distract him, who finally rams into a tree and the cage with the bat flies away. Ace totals Cadby's car, leaving the bat cage jammed in a tree while Cadby runs off.

Ace, tries to chase him, but when he sees that the sun is rising, he confronts his phobia and dramatically returns the bat to the tribes by running through their battlefield with it clutched in his hands, screaming the entire way. Cadby, who was covertly watching, is discovered when Ouda sees him and calls out to alert the nearby warriors that another "white devil" is in the area. He is then pursued by both tribes. Meanwhile, Ace has successfully averted war and quickly rushes the bat back into its ceremonial cage. Cadby, who was pursued, ends up lost, out of sight of the tribes. While laughing at his narrow escape in a brush, he ends up raped by an amorous silverback gorilla. 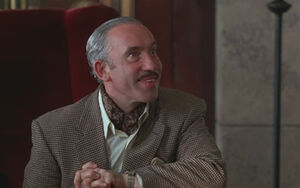 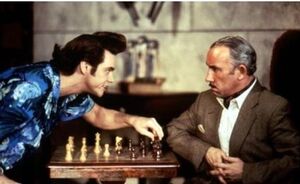