Leader of his crew

Find and retrieve Amenadiel's necklace for Michael (succeeded only with finding it).

Kill Lucifer Morningstar for subjecting him to relentless pain (failed).
Redeem himself and earn a place in Heaven (ongoing).

He is a ruthless French mercenary leader who was hired by the evil archangel Michael to locate and retrieve Amenadiel's necklace. He later returned to exact revenge on Lucifer Morningstar for purposefully whispering in his ear and causing his guilt to leave him in constant pain.

He is portrayed by Rob Benedict, who also played God in Supernatural.

According to Ella Lopez, Le Mec developed a reputation for his ruthlessness while operating as a mercenary leader. He was hired by Michael to find Amenadiel's necklace which was stolen from Caleb Mayfield's corpse before he was buried. Le Mec led his team to interrogate Jonathan Donnelly, the lab technician who stole it, and they tortured him until he told them where it was. He told them that he sold it to a fence named TJ Ross, who sold his stolen items on the black market. After killing him, they ransacked TJ's home looking for the necklace but came up empty. Thinking that he may have sold it to one of his clients, they then kidnapped and interrogated Brooke Frier to see if she had it. However, they found themselves visited by L.A.P.D. Detective Dan Espinoza. Le Mec forced her to answer the door while having his right-hand Sayeed Faisal quietly circle around outside and incapacitate him when he leaves. After this, they killed Brooke and took Dan hostage.

Le Mec and Faisal torture Dan for information on finding TJ Ross and what he knew about Caleb Mayfield. Dan continued declining to know what they want, which Le Mec doesn't accept. He then gets a phone call from one of his associates who told him that the police were looking for Dan, and so he left Faisal to deal with him. He then made contact with Michael and told him that they kidnapped Dan. Michael saw this as an opportunity for his own agenda and ordered Le Mec to kill Dan. Le Mec returned to find Dan trying to escape, and he shot him three times and left with Faisal. Dan succumbed to his injuries at hospital.

After Dan's funeral, Lucifer Morningstar and Mazikeen furiously barged into Le Mec's base of operations and brutally killed the entire group for Dan's death, including Faisal. Lucifer confronted Le Mec who tried to pull out his gun, only to witness Lucifer's devil eyes. After Lucifer whispered something in his ear, Le Mec then collapsed on the floor in sheer panic. He is later imprisoned for Dan's murder, all the while being constantly tortured by the voices in his head. As was later revealed, Lucifer trapped Le Mec in his own living Hell loop, forcing him to continuously relive his guilt which eventually drives Le Mec insane.

A month or so later, Le Mec manages to break out of prison due to a guard forgetting to lock his door during the chaos inadvertently caused by the angels. In the middle of robbing a store, Dan's ghost manages to possess Le Mec's body. While Dan explains the entire situation to Lucifer while the Devil explains what he went through, Le Mec hears everything, including how Lucifer has a daughter from the future who time-travelled. When Dan overcomes his guilt and goes to Heaven, Le Mec goes back to his body and finds out how he can get his revenge.

He kidnaps Lucifer's daughter, Rory, and holds her hostage with the remainders of his gang, while ripping out the blades from her wings to use them as weapons, planning to kill her so Lucifer will feel the same he felt, while also killing the Devil himself. When Lucifer arrives, he explains that it's Le Mec's guilt that haunts him, having driven Le Mec insane, but Le Mec denies feeling guilt for anything. Lucifer, already knowing thanks to Rory that he's supposed to "disappear" on the current date, accepts death and allows Le Mec to kill him. However, Rory breaks herself out in time to choke Le Mec and almost kill him, but Lucifer manages to stop her. While the father and daughter embrace, Le Mec tries to stab Lucifer, but he's stopped by Chloe who shoots him in the chest and he falls straight to the table where he was keeping Rory's blades, being impaled by two of them. Le Mec says that he wants to see the same lights Dan saw before leaving his body, letting Lucifer realize his friend managed to ascend to Heaven. The smile on Le Mec's suddenly disappears as he says the only thing he sees is darkness as he finally succumbs to his wounds and goes to Hell.

Decades later, Le Mec is one of the souls that Lucifer is trying to help get past their guilt and rise into Heaven. Having regained his sanity as well as a calmer disposition, Le Mec offers to shoot Reese Getty in the face if he can't change and put Reese out of his misery. Lucifer tells Le Mec off for his threat, noting that they still have work to do with him, something that Le Mec accepts with ease. Their session is then interrupted by the arrival of a recently deceased Chloe who Lucifer initially thinks is someone delivering them refreshments. It's unknown if Le Mec managed to ascend or is still stuck in Hell. 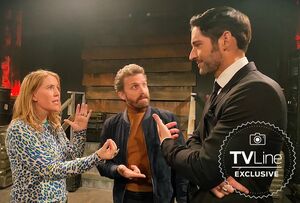