Killing women who resemble his mother

Record his murders with his camera-glasses and replay it

Kill women who resembled his mother

Vincent Rowlings is a major antagonist in the crime-drama TV series Criminal Minds. He was an obsessive compulsive serial killer who appeared as the main antagonist of the Season 4 episode The Big Wheel.

He was portrayed by Alex O'Loughlin, who also portrayed Michael Carter in Feed.

Vincent Rowlings was born on May 5, 1974 and the only child of Sid and Kim Rowlings. The Rowlings family appeared to be very rough and unstable, with Kim cheating on her husband with another man. On June 5, 1983 Sid returned home from work and found Kim with her lover. He forced him out and murdered Kim in a fit of rage after she told him she hated him and herself. Vincent (who was hiding in a corner and recorded the murder with his camera-glasses) waited until Sid fled the scene and ran to his mother's side and stayed with her for almost a day. He never showed the Police the film and replayed it to himself repeatedly (so much so that the video began to degrade in quality). Vincent was only nine at the time.

Vincent began killing random women who resembled his mother, starting in June 1998 and stopping on April 18, 2007. He killed ten women in those eight years, the last of which was Joyce Walcott, the mother of a blind boy named Stanley Walcott. Stanley witnessed the murder but Vincent spared him. Vincent also recorded these murders and replayed them to himself.

Vincent became an assistant at a mentoring program and later met Stanley again through foster care. Stanley was completely unaware of what Vincent had done and befriended him (even teaching him his echo-location technique, which became another one of Vincent's OCD rituals). This presumably influenced Vincent greatly, as he stopped killing for the entire year of 2008.

The killings begin again and the hunt is on

In March 2009, Vincent was informed by Stan's foster mother Kate Charlotte that they would be moving to California soon. Saddened and enraged, Vincent began his serial killings all over again, slaying Michelle Watson and Alice Steadman in a week (but more mercifully and with remorse afterwards, as killing had become addictive to him). This is also when the BAU became involved and began investigating Vincent's killings. Vincent sends a video of Michelle's murder to the Police before killing Alice after she discovers he's the killer. He later runs into Stanley and he is told nothing will happen if he steps on the cracks in the sidewalk.

Run-in with Jay and Carl

Vincent later runs into two Gangbangers Jay and Carl while walking down a street. Jay tells him that it's "my street" and tries to rob him. But Vincent only responds by stabbing him and Jay shoots him once in the body before dying. Carl watches in horror and is later arrested (and he helps the Police by describing Vincent). Vincent runs home and tends to his wound with bread and plastic. He also replays the video of his mother's death again.

The ride and goodbye to Stanley

Vincent later takes Stanley to a carnival that night. While driving there Stanley tells Vincent that the Police interviewed him about his mother's murder and how he wished the killer had killed him too. Vincent tells Stanley that the killer must have seen something within Stanley and how he should never wish to die (also revealing how he witnessed his own mother die). They make it to the carnival and ride the Ferris Wheel (hence the episode's name) and it stops at the top at Vincent's request. The BAU (who talked with Kate earlier and by now had figured out Vincent's identity, background and his location) arrive at the carnival. At the top, Vincent (who was dying from his gunshot) finally asks Stanley for forgiveness before dying. Stanley makes it off the ride and figures out that Vincent is the killer of his mother and grieves.

Presumably psychologically scarred from this, Vincent developed Obsessive Compulsive Disorder. Some of his known rituals include: 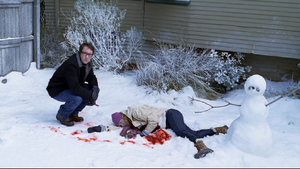 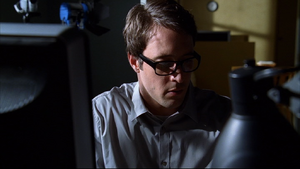 Vincent in his editing room 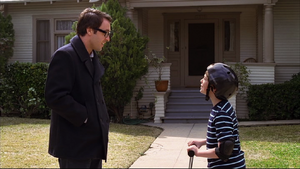 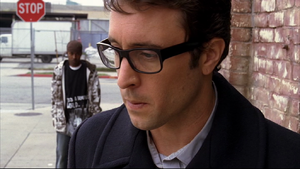 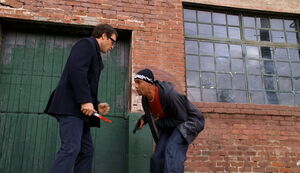 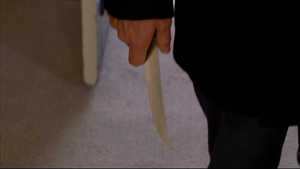 Vincent with his knife 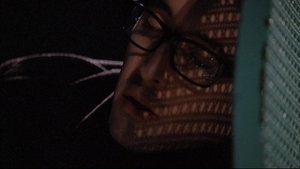 Vincent succumbing to his gunshot 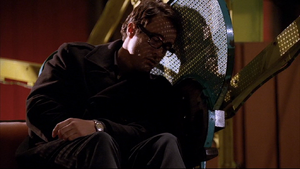 Vincent dead on the Ferris Wheel 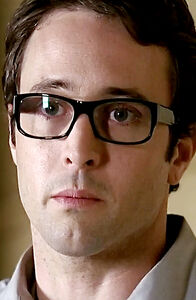