Reclaim drugs stolen by Clarence and Alabama (all failed).

Vincenzo "Vincent" Coccotti is the main antagonist in the 1993 action-romance film True Romance. Despite being the biggest opponent, he only appears in one lengthy scene as his men are the ones sent to carry out his work.

He was portrayed by Christopher Walken, who also played Max Zorin in A View to a Kill, Bradford Whitewood Sr. in At Close Range, Frank White in King of New York, Max Shreck in Batman Returns, Gabriel in The Prophecy series, Mr. Smith in Nick of Time, Colonel Cutter in Antz, the Headless Horseman in Sleepy Hollow, Reed Thimple in The Country Bears, Salvatore Maggio in Kangaroo Jack, Cornelius Hatcher in The Rundown and King Louie in the 2016 The Jungle Book live-action remake.

Vincenzo Coccotti is a Sicilian consigliere for local Detroit mobster "Blue" Lou Boyle. Sent with some hitmen to the abode of Mr. Clifford Worley, the estranged father of Clarence Worley whom they tracked down by Clarence's driver's license, accidentally left behind at the place owned by pimp boss Drexl Spivey - whom Clarence had recently murdered during a confrontation between them. Coccotti tries to get the current whereabouts of Clarence and more importantly Boyle's drugs.

However, he quickly underestimates his hit, as Clifford turns out to be an incredibly difficult character. And during this time Vincent's learns that his wife C.R. is being held hostage at the address that they find on the fridge. In spite of beatings and tortures Clifford not only never reveals anything he knows of Clarence, he goes so far as to personally offend Coccotti by telling him that Sicilians were "spawned by ni--ers" (after realizing that he is going to die anyway).

Ambivalent with Cliff's bravery, showing signs of both respect for him and frustration for being unable to get anything out of him Coccotti gives him an affectionate kiss on the cheek (a signature move of Mafias about to kill someone) before brandishing a gun and shooting him multiple times - killing Clifford in the end. As he shot Clifford to death, Coccotti murmured that he has not killed a person since 1984 before pumping more leads into Clifford's body. The trip is not wasted however, as one of the henchmen find information on Clarence's whereabouts stuck to the refrigerator. Coccotti then ordered his men to "fix this f-cked up family for good" by hunting down Clarence and killing him for good. Vincenzo is not seen again for the rest of the movie, as his hitman Virgil along with the other mafia members would unsuccessfully carry out his order. 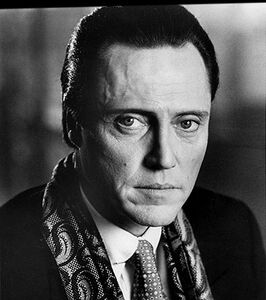 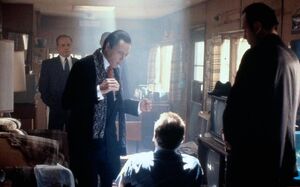 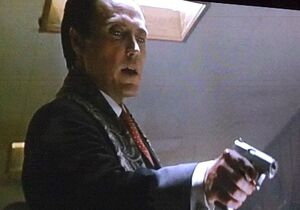 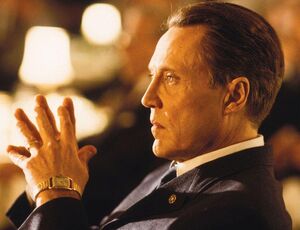