Fantastic Beasts: The Crimes of Grindelwald

Vinda Rosier is one of the secondary antagonists (alongside Abernathy) of the 2018 film Fantastic Beasts: The Crimes of Grindelwald and a major antagonist in its 2022 sequel, The Secrets of Dumbledore.

She was portrayed by Poppy Corby-Tuech.

Vinda was a Caucasian woman with green eyes, dark hair, and pale skin. She also wore eye shadow and purple lipstick. She dressed elegantly as a mark of her upper-class heritage, wearing a sweeping green dress and stereotypical-looking witch hat. While beautiful, that hardly veiled her cruel and murderous intentions.

She serves as the secondary antagonist in Crimes of Grindelwald and presumably the rest of the series.

Much of Vinda's backstory is not known, except that she was born in France and into the Rosier-family, a famous pure-blood Rosier family. By the way she acted and dressed, it could be guessed that she came from a wealthy background as well, similar to other pure-blood families, such as the Malfoys, Lestranges and Blacks. She was most likely also a pure-blood supremacist and had a dislike for non-magical people.

At some point before 1927, she joined the Dark Wizard Gellert Grindelwald and his Army, at some point becoming part of his inner circle of acolytes as well as his second-in-command.

In 1927, she followed her master, along six other acolytes members, into Paris, looking for Credence Barebone and prepare for a rally in order to gain more recruits. Vinda took part in the killing of a non-magical family, since they needed a temporal base of operations.

On Grindelwald's orders, she and fellow acolyte Abernathy, infiltrated the French Ministry of Magic in order to steal the Lestrange family box from the Records Room.

After this she managed to locate the lonely and grieving Queenie Goldstein, who was distraught over the non-magical man she loved. Vinda managed to invite Queenie to the Muggle home they had invaded, offering the lonely American witch tea and company. Grindelwald joined the two witches, and explained to Queenie that she could help his and Vinda's cause to liberate wizardkind, which in return would allow to Queenie to love Jacob openly. The two were successful as Queenie would later join their cause.

That evening, Vinda was present in the planed rally, where many French pure-blood's appeared. She gave her master the skull hookah (a magical human skull that could be used to show visions of the future), which he used to show the upcoming Second World War. After several Aurors arrived, Grindelwald cast a conjured a circle of protective fire around himself that tested the loyalty of all present, which Vinda and most acolytes passed, save for the wizard Krall. She was then stunned by Leta Lestrange, before disapparating away. 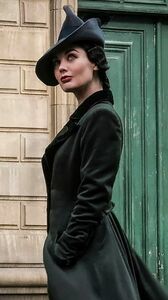 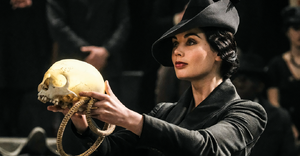