Arms
Epitaph:
See into the future for up to ten seconds

Vinegar Doppio is a major antagonist featured in JoJo's Bizarre Adventure: Golden Wind. Serving as the secondary antagonist in the second half of the story arc.

Doppio works as the underboss for Passione and believes himself to be the most loyal subordinate Diavolo has, however, the two are actually separate souls sharing the same body.

Doppio is introduced in Sardinia, carrying a suitcase while also trying to save a child from the road. After that, he catches the attention of a fortune teller. Doppio is first confused when the man guessed that he's searching for his teenage daughter, but after being haggled for money, Doppio snaps and Diavolo unleashes himself and ends the teller's life. The boy from earlier saw this, and reasonably flees in terror.

Getting on a taxi, he heads to Donatella Una's house, only for Diavolo to warn him about Risotto Nero through Doppio's "imaginary phone", who was there to attack Team Bucciarati and Doppio is ordered to eliminate the traitorous Stand user. Doppio, however, immediately forgets what he was supposed to do. Risotto then attacks Doppio, who is quickly outmatched by his Stand, Metallica. Risotto noticed that Doppio was a stand user due to him reacting to Aerosmith, the stand of Narancia, and the fight commences. The fight was long and brutal, and it nearly killed Doppio, but through strength and trickery, Diavolo manages to kill Risotto after emerging from Doppio, bringing an end to Squadra Esecuzioni.

After Diavolo replenishes the iron Doppio lost in the fight by eating a frog and drinking a boy's blood, Doppio is used as a trap for Diavolo to successfully slay Leone Abbachio. Not long after, Diavolo orders Doppio to send Cioccolata and Secco, his maligned but useful and living henchmen, after Buccellati's Group. In Rome, Doppio is briefly kidnapped by Secco, although Buccirati saves him, unknowingly saving Diavolo as well. Believing Doppio to be Trish, they corral him into the Coliseum, where Polnareff is.

As Chariot Requiem activated, his soul is put into Bucciarati's body while Bucciarati's soul is put into Diavolo's body. Keeping an eye on the body he's in, he's quickly shot down the moment he awakens by Mista. Doppio then fatally bleeds out on the pavement, feeling lonely and both wishing for his boss to call him but also approving his decision of sacrificing himself for his boss.

Doppio appears as a man of young and slim but fit build with pink hair tied into a neck-length ponytail, tied back with a hair clip in the manga but the anime changes it into a weave-like braid, freckles, and brown (Pink in the manga) eyes. He wears a sweater with gash-like openings on it that leave the midriff exposed, a black shirt under said sweater, blue studded jeans, and blue shoes.

Doppio is quite kind, honest and a bit of a coward. He is also good with children, and hallucinates random objects as "phones" (Frogs, cigarettes, Ice cream, etc) to talk to his boss who he is extremely loyal to. Doppio is also shown to be an animal lover, as he's shown to care about even bugs. Despite being a bit cowardly, Doppio doesn't bite down from a fight, as seen in his fight against Risotto, and is also calculated. He's usually unquestioning to the boss, can act bipolar once angered (Mainly with people he deems stupid for not giving him his "phones", Diavolo calling him when he shouldn't call or when harassed), and has a weak memory. Doppio doesn't know that the "phones" he uses aren't actually phones, nor does he know that the Boss is him. 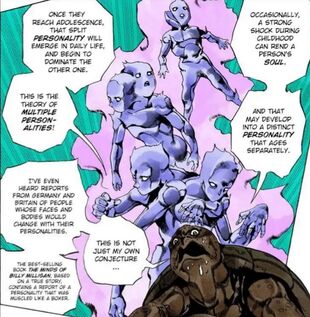 Doppio shows signs of DID (Dissociative Identity Disorder) and Schizophrenia, such as Memory Loss/Amnesia, Headaches, Hallucinations (Mostly phones) and Unawareness that he and Diavolo share the same body. The Theory behind DID is that the mind as a defense/coping mechanism switches to a different personality resulting in a blackout for the main personality. So a person with DID tends to switch personalities when they're extremely angry or pressured into uncomfortable situations. This is seen several times with Doppio, as every time he was pressured/harassed, he switched to Diavolo/Diavolo took over, with Doppio having no idea what happened during that time and having a headache afterwards. While Doppio is a polite man, he can be quick to anger and act bipolar once stressed.

Who was the original?

It is theorized that Doppio is the original personality or alternatively the dominant one, as the Boy seen in the flashback had fashioned his hair into a braid like Doppio and Doppio fits the "honest but dim" description better. However, whether this is true or not is currently unknown. In the extended flashback in the anime, the baby also had Doppio's eye color and the boy had freckles, like Doppio. Doppio's voice actor, Soma Saito, also voiced the boy in the flashback, implying it even more. When Silver Chariot Requiem swapped everyone's souls, Diavolo wasn't transferred to a separate body, but instead his soul latched onto Mista's body which had already another soul in it, implying that Diavolo needs a Host to be able to live on while Doppio was transferred to Buccellati's body where he was able to live on alone until he was killed by Mista. When Polnareff explained DID, he used Billy Milligan as example who had a split personality which was muscled like a boxer (When Diavolo took over Doppio for the first time on screen, Doppio's body became buff). When the Mangaka of JoJo drew all the Main Villains in one picture, it was Doppio there, not Diavolo. The episode in which Doppio appears for the first time together with the backstory is called "A Little Story From The Past my Name Is Doppio" (Manga) while Diavolo's first full appearance is in the episode called "His name is Diavolo" (Manga). Doppio also has a full name, with the only Antagonists in the same part who have one as well being Mario Zucchero and Risotto Nero, while Diavolo doesn't have one. It was also confirmed in a Q&A that all added or extended flashbacks in the anime are canon, therefore making it highly likely for Doppio to have been the original personality until Diavolo became the dominant one.