Mobster
Minion of Pizza the Hutt

Threatening those who own Pizza the Hut money.

Vinnie is the robotic Mafioso-like subordinate of Pizza the Hutt and a minor antagonist in the 1987 live action film Spaceballs. Vinnie appears to suffer from some sort of mechanical glitch which often causes him to twitch between sentences. He dresses like a stereotypical mobster, wearing a formal striped black suit, black gloves, sunglasses and a fedora. He seems to enjoy eating his boss's cheesy body.

He was portrayed by Rudy De Luca.

By the end of the movie, Pizza The Hut is killed when he was trapped inside his limousine and ate himself to death. It's unknown what became of Vinnie afterward. Although its likely he either became unemployed or was made the new head of Pizza's organization. 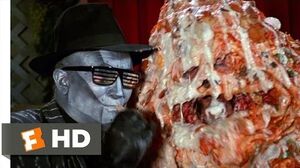 Retrieved from "https://villains.fandom.com/wiki/Vinnie?oldid=3953164"
Community content is available under CC-BY-SA unless otherwise noted.