Big Bully (by Thomas and Philip)

Get back at Philip for getting in his way (both failed).

Vinnie is the main antagonist in the 2016 film Thomas & Friends: The Great Race, despite his small role. He is a streamlined North American steam engine who bullies smaller engines who get in his way by abusively pushing them around for his pleasure. He competed in the Great Railway Show for the Strongest Engine competition. His design is based off of the Canadian National Railway's U-4-a 4-8-4 6400. He is Philip's archenemy.

He was voiced by John Schwab.

Vinnie is very rude and competitive, with a reputation for being a bully, and will do anything to win a competition, including cheating. He views smaller engines such as Thomas and Philip as inferior to him, often calling them derogatory names such as "Shrimp" (Thomas) and "Shortie" (Philip), and often takes pleasure in bumping them around. Because of his vile behaviour, hardly any of the engines get along with him.

He is also shown to be reckless, as seen by bashing through a pile of rocks, and Gina's flatbeds.

Despite his intimidating size and demeanour, Vinnie has proven himself to be a coward in the face of greater adversity, as shown when he was panicking after his accident at the Great Railway Show.

Vinnie first appears when he and the other international engines (including Ashima) accidentally came to The Island of Sodor when the ferry they were on stopped at Brendam Docks. After The Dock Manager explains their current whereabouts, they (except Ashima) immediately went back to the ferry. During that, Vinnie bumps Thomas out of the way and rudely calls him "shrimp", much to Thomas' anger. Later on in The Great Railway Show, Vinnie is taking part in The Strength Competition, alongside Henry from Sodor, Hiro from Japan, Shane from Australia and Frieda from Germany. On his way there, he got blocked by Philip, a small diesel boxcab. Vinnie insulted Philip and threatened him to end up being recycled if he doesn't watch where he's going and storm off, laughing, much to the shock of Percy and Gordon (who is streamlined for The Great Race event and renamed Shooting Star). Vinnie participated in the Strongest Engine competition and although he's ahead of the other competitors which makes him win in first place, it is unknown if it's him.

Later on, Philip bumped into Vinnie again, much to his anger. He chased after Philip who reverses towards a coal hopper where Carlos is using which results in Vinnie got covered in coal. Mildly infuriated, Vinnie chased Philip through the yard, eventually ending up in the middle of the Shunting Challenge where Thomas and Ashima are competing, derailing two of Gina's flatbeds, which were blocking his way. He bumps Philip, sending him all the way to the turntable and advances on him to force him into the well, stating to Philip that "the race is over for him".

But just as he's about to force Philip into the turntable well, Vinnie felt Thomas coupling up to him and tries to hold him back to save Philip, along with Ashima who came to help. Vinnie mocks the two tank engines for their size and attempts for a tug of war but got surprised when they managed to pull him back far enough for the signalman to switch the points and allow Philip to escape. Shocked, Vinnie pulls hard, which caused Thomas' coupling to snap, resulting to him derailing at the points which are set against him and crashed into an electricity pylon, which then fell on top of him. Vinnie is trapped under the pylon, screaming for help and rudely asking Thomas and Ashima if they're gonna help him or not, which they didn't. It is unknown what happened to Vinnie for the rest of the film but it is presumed that he remains under the pylon for the rest of The Great Railway Show and was rescued that evening before heading back to North America in disgrace.

He later appears in Thomas & Friends: Big World! Big Adventures, working at San Francisco Docks during The Fat Controller's search for Thomas when he travels the world with Nia, an African orange tank engine from Kenya and Ace, an Australian racing car.

It is unknown when Vinnie will appear again in the series for revenge against Thomas. 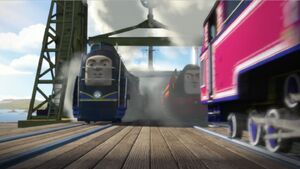 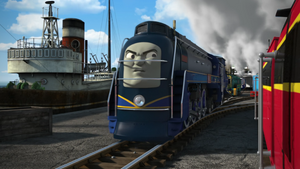 Vinnie bumps Thomas as he reverses back to the ferry 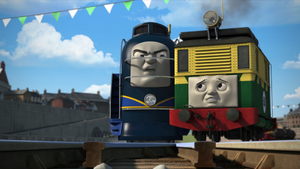 "Yeah?! Well, you better watch where you're going, Shorty! Or you might end up being recycled!" Vinnie threatening Philip to ended up be recycled if he doesn't watch where he was going. 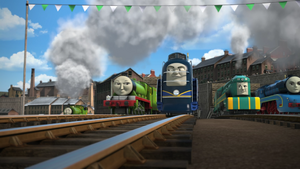 Vinnie in the strength competition 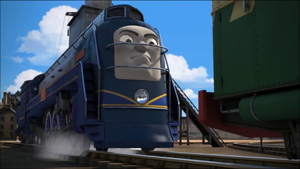 Vinnie's villainous breakdown when he got covered in coal, which makes him more angry and determined to get back at Philip 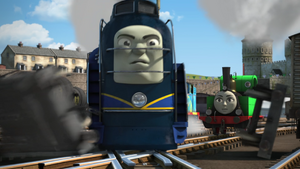 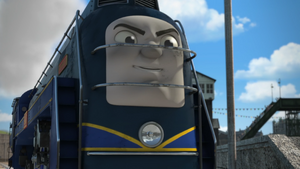 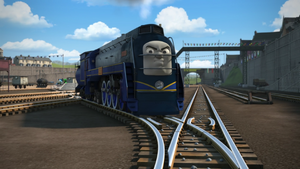 "Oh dear, Shorty! Looks like the race is over for you!" (chuckles) 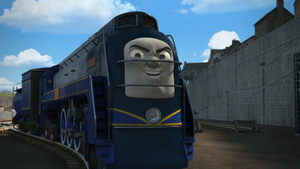 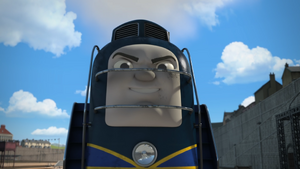 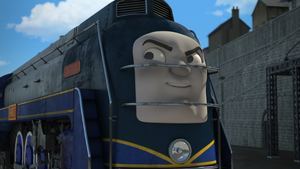 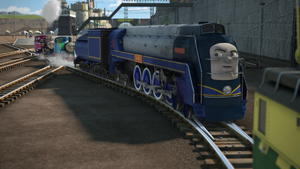 Vinnie taunting Thomas and Ashima's attempts to pull him back to save Philip. 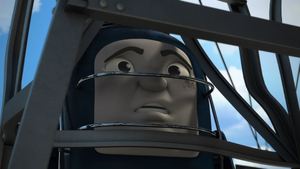 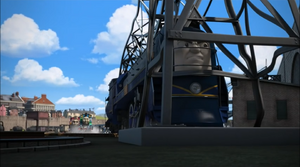 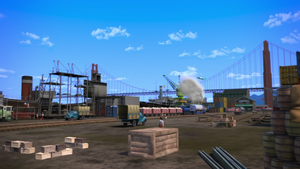 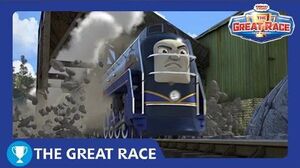 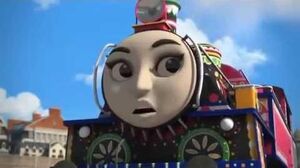