My Liege (by Betty and Veronica)

Vincent "Vinnie" Wells is the main antagonist of the time travel arc of Archie's Weird Mysteries. He is a lazy delinquent at Riverdale High School who, after stealing Dilton's Chrono Field Generator, tries to use its powers to steal money, before later using it to try to take revenge upon Archie Andrews and Riverdale alongside his future counterpart.

Vinnie debutes as Principal Weatherbee takes Archie to his office, with Weatherbee remarking that he broke into twenty school lockers that morning. Vinnie tries to justify his crimes by claiming that he needed money for nachos at Pop Tates'. However, Weatherbee says that this is no excuse as he scolds Vinnie for the fact that he failed his senior year twice, and yet still knows how to pick locks. Weatherbee then promises to deal with Vinnie later. It is implied that Vinnie was given either detention or suspension afterwards.

That night at Pop Tate's, Vinnie rudely interrupts Archie's date with Veronica by demanding him to give him some money for nachos, but Archie refuses by telling Vinnie to go to the bank if he needs money. Furious, Vinnie voices his dislike of Archie and Riverdale to himself, claiming that he hates the town and everyone in it. Then, as Archie's friend Dilton arrives, he eavesdrops on their conversation, learning that the latter has built a time-travelling device called the Chrono Field Generator, causing him to smirk. Vinnie proceeds to follow Dilton as he leaves and steals the Chrono Field Generator from him, plotting to use it to get the money he needs for nachos. Dilton runs back into Pop Tates' to tell Archie about the theft, hitting him with the door in the process, which seemingly causes his day to reset.

Archie begins to experience the same day repeatedly in a continuous time loop afterwards, and eventually visits Dilton over the matter, who discovers that his body is infused with chronophaseatrons as a result of his earlier test with the time belt (making him aware of whenever there has been a change to the timeline), as well as the fact that, if the reset button on his Chrono Field Generator is used too often, it could reset time forever. Archie uses the time belt to transport himself to the time of the theft and sees Vinnie run off with the Chrono Field Generator, following him to the bank where, after lock-picking the door, he attempts to break into the safe without setting off the alarm. Archie begins to wonder why Vinnie needed the Generator if he is a common thief, and at that moment when Vinnie sets off the alarm, he uses the Generator to wind back time and prevent himself from being apprehended, plotting to try to break into the vault again later. Realizing that Vinnie's misuse of the Generator will make time loop forever, Archie manages to take the Generator from Vinnie before escaping, resulting in Vinnie being caught by a security guard. As he is being arrested for his crime, Vinnie swears vengeance on Archie and Riverdale, even if it takes him thirty years.

While incarcerated in a cell for his crime, Vinnie is freed by his future self, who has obtained a stolen Time Generator and aids his younger self to get revenge on Archie and become ruler of the world.

To that end, Vinnie and his future self cause several changes in the time stream, which was evident with Betty, Veronica, and Jughead having the opposite personalities of their non-altered timeline selves and Archie's red card turning pink and later into a moped. Eventually, the future Vinnie successfully turns Archie into a pariah by the entire town while having his younger self to be made ruler of the world and fed with nachos.

Teen Out of Time

The future Vinnie eventually escapes from the time stream with the stolen Generator and attempts to get revenge on Archie once again. This time, he decides to kill everyone in Riverdale by using a Tyrannosaurus Rex he brought from prehistoric times. After Archie prevents the T-Rex from eating Principal Weatherbee, Vinnie orders the dinosaur to go after Archie. He then believes that he has killed Archie (when in reality, he escaped using the time medallion) and proceeds to go after the rest of the town, gloating over Archie's supposed death.

Archie travels through time to get back to the present after causing specific events in the series to occur (such as Betty becoming friends with Archie, a young Weatherbee becoming principal, and Veronica's family moving to Riverdale). Archie then uses his medallion to send the T-Rex back into the past before reuniting with his friends. Despite this, the future Vinnie states that he has not given up as he still has the Generator and intends to summon more T-Rexes to kill Archie and everyone in Riverdale to exact his revenge. Fortunately, the future Archie arrives to the rescue by grabbing the stolen Generator and using his own to send the future Vinnie back to prison in the future for his crimes against the time stream.

As a teenager, Vinnie Wells was a tall lanky boy with dirty, spiky hair and a stubbly goatee. He wore a t-shirt with a short sleeved dark red jacket, khaki shorts, and a necklace.

30 years later, Vinnie was clean-shaven and had a widow's peak with a tuft of spiky blond hair on the front. Interestingly, despite the widow's peak, he appears slightly younger then the future Archie as his face appears much less lined. Whilst still wearing the same t-shirt and necklace, he wears a futuristic grey jacket with matching pants and boots.

As a highschooler, Vinnie was a delinquent slacker who seemed to have no goal in life outside of eating nachos, as he deliberately stole a time-travelling device, broke into other people's lockers and robbed a bank; all just to steal money just to buy himself nachos to munch on. His layabout attitude could be seen even in the timeline, where he was a ruler and had the people of Riverdale serve him nachos.

However, after serving thirty years in prison for attempted robbery, Vinnie became obsessed with exacting revenge on Archie, culminating in him trying to either rule or destroy the town of Riverdale out of spite against him. It even comes up to the point where Vinnie attempts to go back in time to prevent Archie's parents from meeting other and be married, which would nullify Archie's existence, as well as the point where he brought a T-Rex to destroy Riverdale and kill everyone for his pleasure.

Vinnie is also proven to be in denial as he blames Archie for his misfortunes; even when it was evident that Vinnie himself is to blame as he foolishly tried to steal money from others and defied Archie's advice not to mess with the time stream, Vinnie angrily refuses to accept this as he is still bent for revenge against Archie and the rest of Riverdale. This also proved to be his downfall as it distracted him long enough for the future Archie to send him back to prison in the future. 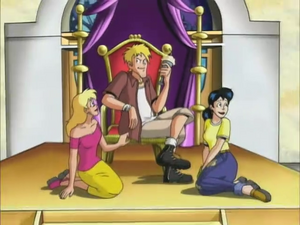 Emperor Vinnie on his throne 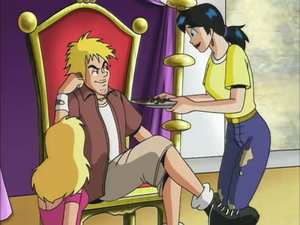 As Emperor, Vinnie is served his long desired nachos. 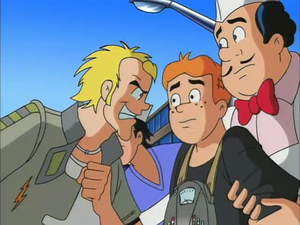 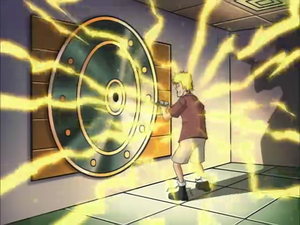 Vinnie getting erased from time 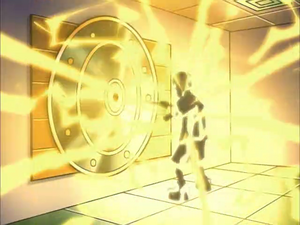