Leading the soldiers of Germa 66

See that Sanji gets married to Pudding (failed)

Vinsmoke Yonji is the youngest son of the Vinsmoke Family and a high-ranking member in Germa 66. Yonji like his brothers, Vinsmoke Ichiji and Vinsmoke Niji, was born without empathy and actual emotions. Yonji alongside his siblings were responsible for abusing Sanji when they were kids. Yonji is an antagonist in the Whole Cake Island Arc in the One Piece anime and manga.

He is voiced by Kenjiro Tsuda as an adult, and Akemi Okamura as a child.

Because of Vinsmoke Judge's unethical experiments on the Vinsmoke siblings, Yonji like Ichiji and Niji was born lacking empathy and any human emotions outside of being prideful, antagonistic and violent. As a kid, Yonji was prideful in the Vinsmoke Family and Germa 66 and was loved by his father for being a very strong. In return, Yonji alongside his brothers would constantly bully and belittle Sanji for being weak. When he heard of Sanji's death, he did not care about it even smiling. Over time, Yonji like his brothers grew to have more pride in Germa 66 and the Vinsmoke Family.

As an adult, Yonji grew up to be as antagonistic as his brothers. Unlike his more colder older brother, Ichiji or his other more sadistic and violent brother Niji, Yonji is more snobbish and condescending when it came to looking down on his brother. He mostly preferred to insult Sanji when he was around him. When he fought Sanji upon meeting him after over a decade, he was surprised to see how strong he became when he lost to him in battle and was angry that he lost to someone he had previously considered much weaker than him.

Like his brothers, since he lacks actual human emotions outside of being prideful and cruel, Yonji did not fear dying at the hands of the Big Mom Pirates when they were about to assassinate him and his family. After the assassination attempt and the betrayal from the Big Mom Pirates, Yonji like his siblings seek vengeance against them and decided to attack the Big Mom Pirates on Cacao Island and helping Sanji and Luffy escape from them too.

In the past, Yonji was born and gain superhuman strength and power from the unethical experiments Judge performed on him while he was still in his mother. Because of this, Yonji gained superhuman strength like his other siblings and he would train to become a strong member for the Germa 66 army. At the same time, he would constantly abuse Sanji for being weak and kind than the rest of the family. When he heard that Sanji died from Judge, Yonji did not care. Over time, Yonji alongside his brothers would grow to become high-ranking members in Germa 66.

Yonji and Reiju, appeared near the Sunny near Totto Land where they met the Straw Hats and their allies. Yonji did not want to save Luffy who was poisoned by eating a poisonous fish but Reiju decides to save him much to his annoyance. Yonji and Reiju later left from the Sunny to get to the Germa kingdom. Yonji reunited with Sanji and they got into a fight after he tried to order him about though he was defeated by Sanji. Yonji was frustrated by losing to Sanji, someone who was once weaker than him that got stronger while he got his face repaired.

Yonji was present to see Ichiji and Niji return from their mission and later had dinner with his family when they were meeting up. Sanji got into a confrontation with Niji and later they all left the dining room. Yonji met with Sanji in the clone room and explained to him about the clones for the Germa 66 and how they are reproduced to serve the Germa 66 soldiers. Ichiji and Niji then met Yonji and Sanji and the brothers all ganged up and beat up Sanji severely damaging his face.

Yonji was in the carriage when it left from the Germa 66 kingdom and was on its way to going to Big Mom's castle. Yonji witnessed Sanji's attack against Luffy and the family later met up with the Big Mom at her castle. They sat with Big Mom at her table and later saw her collection.

Later that night, Yonji alongside his family and brothers talked about their plans against Big Mom and conspired to kidnap Charlotte Pudding as a hostage after the wedding. They later had a drink where they were happy and they thanked but continued to mock Sanji behind his back. The morning of the wedding, Yonji and his family made their way to the wedding venues and sat back to witness the wedding. The Vinsmokes were surprised to see the priest collapse from a fatal attack and a bunch of Luffy clones disrupt the wedding by emerging from the wedding cake. The Vinsmokes were detained by Charlotte Perospero's candy technique and was about to get assassinated by the Big Mom Pirates. Yonji like his brothers did not feel the danger and did not care unlike their scared father. Big Mom screamed loud when she sees that her Mother Carmel portrait was destroyed and it knocked out the Big Mom Pirates who attempted to assassinate them. Sanji then appeared and freed them, surprising the family before the Straw Hats gave them their battle suits and they fought some members of the Big Mom Pirates before retreating inside of Capone Bege's Big Father castle. The Vinsmokes agree to protect Capone and Caesar as they try to get out of the wedding venue. Yonji and his siblings and father fought the Big Mom Pirates but were overwhelmed by them and were caught by Big Mom herself. An explosion at the base of Big Mom Castle caused the tower to fall over and allowed for the Vinsmokes, the Straw Hat Pirates, and the Fire Tank Pirates to escape from the Big Mom Pirates. 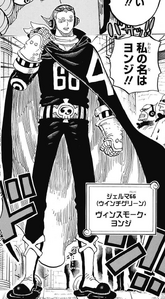 Vinsmoke Yonji in the manga. 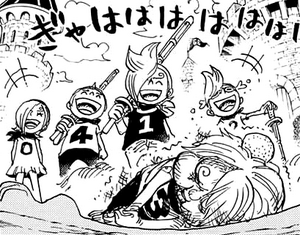 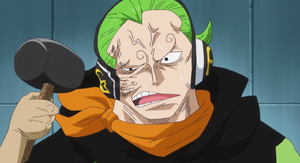 Yonji having his face fixed after Sanji breaks it. 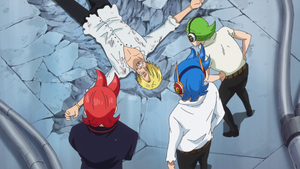 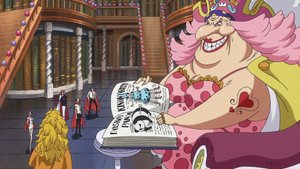 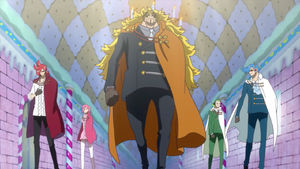 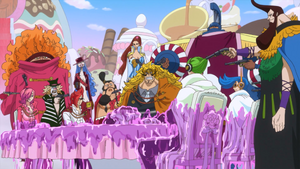 The Vinsmokes held at gunpoint by the Charlotte Family.
Add a photo to this gallery

Retrieved from "https://villains.fandom.com/wiki/Vinsmoke_Yonji?oldid=3779954"
Community content is available under CC-BY-SA unless otherwise noted.