The Keymaster of Gozer

One of the Terror Dogs

Serving the will of Gozer.

Copulate with Zuul the Gatekeeper (succeeded).

Vinz Clortho the Keymaster is one of the two main minions of the demonic deity known as Gozer and a supporting antagonist in the original Ghostbusters film. He is considered a male entity due to his role as the Keymaster, the fact he possessed a male victim and the fact that he has noticeably larger horns than Zuul.

Like Zuul, Vinz Clortho is a member of a demonic race of hellhounds known as Terror Dogs and was once worshipped as a demigod alongside Gozer prior to the Destructor leaving our reality centuries ago op.

While possessing Louis Tully, he was portrayed by Rick Moranis, who also played Dark Helmet in Spaceballs, and the Toy Taker in Rudolph the Red-Nosed Reindeer and the Island of Misfit Toys.

Vinz Clortho was worshipped by the Sumerians and Hittites in 6000 BC, alongside Zuul and their dark master before they were defeated and banished to another dimension by the Babylonian goddess Tiamat and her followers.

Centuries later, Vinz reawakens from its statue-like hibernation after a Terror Dog in a strange temple within another dimension was seen by Dana Barrett from her refrigerator at her apartment calling out the name Zuul.

Vinz Clortho possessed the body of Louis Tully and sought out Zuul, who had taken possession of Dana's body, in order to mate - the union of the two demons would provide enough power to reawaken Gozer and bring about the end of our world.

Vinz emerged from Louis Tully's closet during a party he was holding for his clients. In Terror Dog form, he chased Louis out of the building and cornered him at a restaurant where he attacked and possessed his body.

While possessing Louis' body, Vinz was able to speak in Louis' voice but could not access his memories or knowledge. He took on the identity of The Keymaster and immediately sought out Zuul the Gatekeeper, another minion of Gozer who had possessed the body of Dana Barrett, Louis' neighbor and not so secret crush.

In his persistent and obsessive search of The Gatekeeper, he was arrested by the police for harassing random people in Central Park (including a coachman at whom he growled with red eyes lit up) and later released into the custody of Egon Spengler and Janine Melnitz. Vinz's brain was scanned by Egon at the Ghostbusters headquarters, revealing his true demonic identity on an attached television screen. Egon questioned him and Vinz revealed he was waiting for a sign to bring about Gozer, he then ranted about Gozer's previous incarnations and the devastation The Destructor had inflicted.

Unlike the more seductive tempered Zuul, Clortho was more slow-witted, confusing the Gatekeeper with regular animals in attempts to identify its partner, and repeating human behaviors and speech to mimic humans in close proximity.

When Walter Peck shut down the Ecto-containment unit, The Keymaster managed to escape. Vinz wandered around the city in search of Zuul, staring in a trance at the havoc ensuing around him as the escaped ghosts terrorized citizens. When Zuul blows up her apartment wall with a powerful roar, Vinz demonic sense leads him to the Shandor Building where he finally finds The Gatekeeper.

The two beasts shared a passionate kiss at Dana Barrett's apartment before taking a dark, ominous staircase up to the roof where they were finally able to consummate their satanic union, transforming afterwards into their true demonic Terror Dog forms once they completed the opening of the gateway to a mysterious temple within an alternate dimension through which their master, Gozer entered with the intent of destroying the world.

After Gozer was defeated by the Ghostbusters, Vinz disappears from this dimension and Louis Tully is transformed back into a human being, having no recollection of the events that took place since his and Dana's demonic possession (in a deleted scene, Louis suggests remembering having had sex with Dana Barrett while they were both under possession, to which Dana, unknowingly, believes untrue). 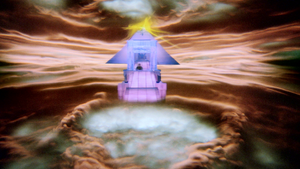 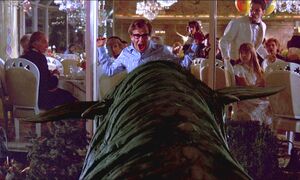 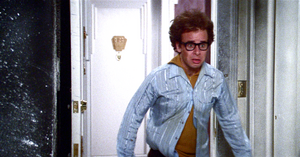 The possessed Louis enters Dana's Apartment for a date with Zuul 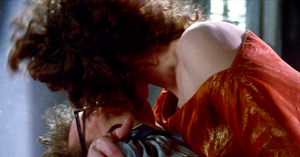 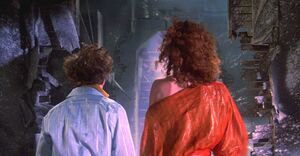 Vinz Clortho and Zuul walk towards the stairway to the rootop as they prepare for the arrival of Gozer. 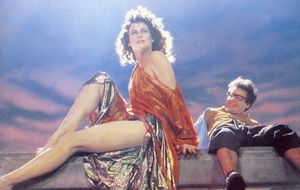 Zuul and Vinz await the coming of Gozer.

A grinning Vinz and seductive Zuul await the coming of Gozer 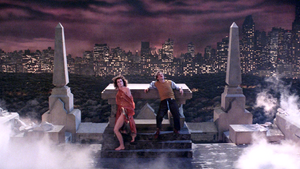 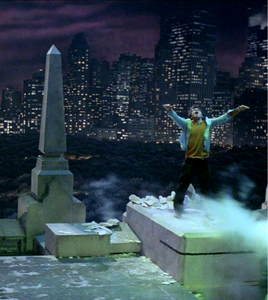 Vinz Clortho (as Louis Tully) raises his arms to begin opening the portal for his master, Gozer. 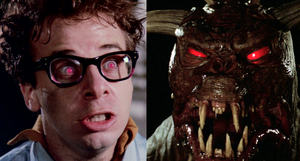 Retrieved from "https://villains.fandom.com/wiki/Vinz_Clortho?oldid=3504084"
Community content is available under CC-BY-SA unless otherwise noted.