NOTE: This article is about the incarnation of Violator from the HBO series. The mainstream version can be found here: Violator.

Continue to pursuing Spawn into killing others for Malebolgia's army (both failed).

The Violator, better known as The Clown, is the central antagonist of the 1997 HBO Series Todd Mcfarlane's Spawn. He is a demon who was sent by his master, Malebolgia to train the newest Hellspawn on Earth.

He was voiced by Michael Nicolosi in his human form and by James Hanes in his demonic form.

Like in the comics, his human form he is a short man with white face paint, balding hair, and red eyes. In his demon form, he is a large skinny demon with red eyes with horns on top and the sides of his head.

Violator is a sadistic and manipulative demon who hates Spawn as well as all humanity and believes he should be the rightful leader in Malebolgia's army.

During his first appearances, he started out as a comedic character, but once he shows his true form he becomes darker and worse, starting out by disguising himself as a chill-killing priest and taking a deaf child as a hostage and even assisting Billy Kincaid kidnapping Cyan Fitzgerald.

After Spawn kills the hitmen, Clown appears and jokes about the whole situation as he walks around Spawn. He calls Al "Spawn" and is confused as to what happened. Barely remembering what he did, he looks at the mangled and charred bodies. Clown tells him it's a reaction and gift.

Violator reveals he's been dead for five years and only now returned. He explains he's really dead and that Hell has a plan for him. Spawn walks away in anger.

While Spawn disguises himself to spy on Wanda, Clown shows up with a chocolate ice cream with worms in it and coffee. He starts to tease Spawn about how he couldn't have children with Wanda and how his best friend Terry sleeping with his former wife. Clown also tells him that he's been dead for five years and he's really dead and that Hell has plans for him.

At night, Spawn is seen sitting on top of the church and was approached by Clown again. He tells him that it's time for him to get ready to start killing people. However, Spawn refuses to do so, Clown transforms into his true form, Violator. During the fight, Violator uses telepathy to taunt spawn. Spawn shoots Violator but heals faster than he did. Violator tells him that he was selected as a warrior by Malebolgia and must not rely on weapons, and didn't think he was worthy. He takes down Spawn and says that the fight was a friendly reminder before walking away.

While Billy Kincaid was cleaning up the blood off his equipment, he watches the news about the evidence was planted to frame the recent murders. Meanwhile, Clown watches Billy heading out for "work". Clown continues to watch Spawn from a distance and laughs as the Hellspawn continues to downward his hatred.

In the city, Clown disguises himself as a priest stripped with grenades while holding a deaf child as a hostage. He plays with a grenade and holding two police officers as hostages. But he hears the police sirens, he threw the grenade under the car and explodes, killing the officers. As the reverend continues to kill the police officers, Spawn spots him. After Spawn has a flashback of Wanda and pins a police officer to the wall for threatening the homeless, the reverend walks up to the police officer and proceeds to torture him. Sam and Twitch arrive at the crime scene, the dying officer appears in a shopping cart and mutters "red cloak" to the officers. They start to search for the priest and the missing weapons in the alleys.

When Billy stopped as a red light, Clown stops him and says "Hello, Billy" to him, confusing the child-killer. Claiming to be a fan and admiring him, he invites Billy to a party at 13970 Runyon.

In the alley, Clown went back and disguise himself as the priest. Sam, Twitch, and the police corners the priest and is shot in the head by an unseen sniper. However, the priest gets up and tells the police it was a nice shot. Once he grabs the boy, he reaches into his shirt and pulls the pins off of several grenades. Fortunately, Spawn swoops in and pulls the child from the explosion as the last second. Later at night, Clown is seen on top of a building as the reverend, he laughs and transforms back into his original self.

As Spawn chases down Billy with holding Cyan as a hostage in the ice cream truck, Clown watches from the buildings and laughs about the whole situation. Once Spawn corners and confronts Billy in the alley, Clown tries to have him kill Billy to complete the task. However, Spawn throws Billy into the ground and leaves. Clown walks up to Billy and shoots him in the head for failing the task. He looks at Spawn and furiously transforms into his true form.

Spawn continues to have visions of his past life and being killed by the man who was also his best friend. Clown snaps him back to reality due to hearing him laughing at him. Clown tells him it's about power and not trust, also tells it's how he loses Wanda to his best friend, Terry.

Spawn wakes up from having visions of Wanda and Terry making love and yells at Clown for those visions on his head but asked by the demon if he truly knows Terry. After Spawn disables the cameras and blinded Merrick, Clown asks him why he hasn't kill Terry yet, which Spawn replies that he needs him alive until he knows the truth.

While Wynn was watching the news report about his stolen weapons, Clown appears on the TV screen. Merrick walks in and Wynn asks her if she sees anything on TV, but denies it.

At the agency, Spawn attacks Wynn. Once he has Wynn, Cogliostro warns him that if he kills Wynn, he'll come back as powerful as he is right now. Spawn lets Wynn live and threatens him to leave Terry and his family alone. After calling Chief Banks, the Clown appears and tells him its time for them to talk, making his partnership with Wynn.

Back at his office, Wynn calls Chief Banks about failing to kill Twitch. Banks informs Wynn that Spawn told Twitch about the latter. Trying to call the vice president, Wynn gets a call from Clown informing about Terry and Richard Sullivan's meeting, the vice-chairman of the NSC, who's been trying to catch Wynn.

After Twitch remembers who shot him, he and Sam confronted Chief Banks at the subway station. Sam gives him an option: give himself up and his family sees all the deeds he has done or takes his own life. Banks look and pick up his pistol puts it in his mouth, pulling the trigger and ended his life, splattering his brains all over a train car window. Clown walks up to Banks' corpse and says "Man have you had a bad day..." and laughs. 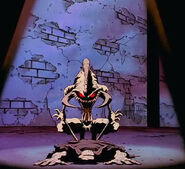 Spawn vs The Violator