Violet is the main antagonist in the 2014 horror film Kristy. She is part of an anti-Christian cult whose goal is to kill God by murdering girls that they believe to be Christian. By their standards, it means they are rich, beautiful and privileged. They dub their victims, "Kristy", which is Latin for "follower of God".

She was portrayed by Ashley Greene.

Violet's latest Target was Justine; a struggling college student who is alone on campus over Thanksgiving break. Violet meets Justine in a gas station, complimented her car (which she borrowed from a wealthy roommate), and called her beautiful. She tried to get a discount for a pair of sunglasses, despite not being a student. Justine offered to pay for them, but Violet snarled back, saying that she doesn't need anything from her. She broke into Justine’s dorm room, commented on a picture of her and her boyfriend, Aaron, and started attacking her. Justine tries to escape, only to be encountered by Violet's cohorts. They killed two security guards in the process. Violet and her cult members chased Justine around campus while sending videos of herself and threatening messages. When Justine went to groundskeeper Scott for help, Violet's gang killed his guard dog, and then killed him by hanging him.

When Aaron drove back into campus to look for Justine, Violet tricks him by making him think that she's Justine from afar. Justine tried to warn him, but he got killed by one of Violet's cohorts. After killing Violet's accomplices, Justine discovered from an accomplice's phone that Violet's cult has murdered dozens of women and filmed their murders called "The Field". Justine uses the accomplice's phone, and tells Violet that they killed her. Justine encounters Violet's, dressed up as one of her minions, and douses her car with flammable pool chemicals. When Violet lunges at Justine with a box cutter, Justine ignites the substance, engulfing Violet in flames.

Violet is a cruel, sociopathic, ruthless and anti-Christian person who has shown envy for every "Kristy" out there. Consumed by hatred and bitterness, she is determined to find the "Kristy" she hates so much so she can kill her again and again.

Violet in the gas station. 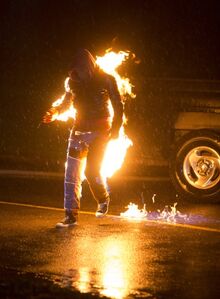 Violet engulfed in flames.
Add a photo to this gallery
Retrieved from "https://villains.fandom.com/wiki/Violet_(Kristy)?oldid=3869319"
Community content is available under CC-BY-SA unless otherwise noted.