Violet Vanderfleet is an antagonist from Totally Spies. She appeared in "Evil Bouquets Are Sooo Passe" and "Baddies on a Blimp".

She was voiced by Linda Ballantyne.

An accomplished botanist, she created a hybrid of poisonous flowers called the "Viola Vanderfleetus" to destroy the male half of civilization because of her own failed relationships and because of her belief that there are, in her words, "a lot of angry, hurt women out there" who "all want revenge". She is unaware of the fact that men get dumped just as often as women do, maybe even more, and that some couples are perfectly happy with their relationships. Her madness began after a boyfriend dumped her for another (although it is unspecified whether it was another male or simply another woman). She also appears to have a similarly poor dating record, seeing men who "all dumped [her], too".

At one point, she offered Clover a chance to help her as she sensed Clover's rage at the fact Samantha was dating Clover's ex-boyfriend Fernando. However, Clover refused. After her plan goes haywire, being attacked by her own creation, the spies defeat her and take her to the WOOHP Prison.

In addition to her knowledge of plant biology and chemistry, she was also shown to be able to pilot a plane and was a skilled combatant, easily dodging and countering the spies' combat skills. She effortlessly nearly took down all three of them by herself, though the girls may have been exhausted from the previous encounters with her plants. 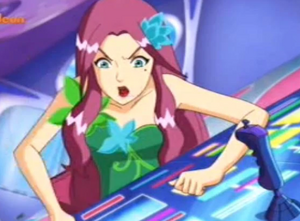 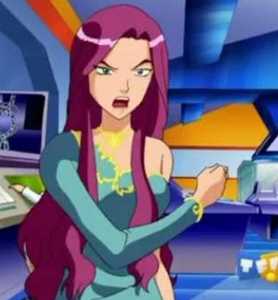 Retrieved from "https://villains.fandom.com/wiki/Violet_Vanderfleet?oldid=3700113"
Community content is available under CC-BY-SA unless otherwise noted.