Member of The Sumeragi Seven (currently)

Viper, also known as Daytona in Japan, is a member of the Sumeragi Group, one of the seven adepts under of the command of Lieutenant Nova, and one of the major antagonists of the videogame Azure Striker Gunvolt. He was placed in charge of Sumeragi’s chemical plant. He has an affinity for explosions.

Viper is an adept who keeps watch over Sumeragi’s chemical plant complex. His septimal power, known as Explosion, gives him the ability to compress a large amount of thermal energy into small spheres that explode on impact. He can also engulf his body in flames to deliver extremely deadly attacks. Viper was once a notorious gang leader, but once he became infatuated with Lumen's voice, he quickly found himself signing up for Sumeragi’s private army. The Glaive which holds his septimal power is called the Lord of Fire.

Viper is a teeange boy, having red eyes and red hair. (said hair being styled in a ponytail when he's not Weaponized.) He wears a black and gold Sumeragi officer's jacket with a white shirt under it. He also wears long checkered pants, black boots, and sliver earrings. In some promotional material for Justice Rage, Viper trades his jacket and undershirt for a red sweater.

In his weaponized form, Viper's outfit takes inspiration from the mythical Unicorn and Centaur. While weaponized, Viper's eyes turn black with red being only in the irises, and his hair becomes a more orange color. His armor is both based on a unicorn and centaur, being red, black and white with gloves, a horn-esqe spike on the helmet, and guns attached to the legs.

Being based on the sin of wrath, Viper is naturally crude and quick to anger. He is also very defensive, and combined with his short temper, often causes him to fly into a rage from even the slightest insult, Once even furiously attacking one of his gang members for just a small tease.

Oddly, when Viper isn't angered about anything, he can be surprisingly calm and aloof, showing a general interest in nothing in particular and is about everything in general. Viper also dislikes his Septima and saying he never asked for it. He also holds some resentment against society, feeling discriminated against due to his Septima, and fully acknowledging people only follow him out of fear, and often feels a general "emptiness". Viper is also extremely infatuated with Joule, her being the sole reason he joined the Sumeragi Group, saying she is "cute" hooked up to machines, and that Nova promised to give her to him after Project Muse was finished.

At some point in time, Viper is the infamous leader of a street gang known as Maiden Blood. The first track in the Drama CD, Smoldering Flame, starts with Viper giving a monologue about his Septima, describing it as a "monstrous power", saying it never helped him, and insulting anyone who sees it as a good thing. A young girl then recognizes his Septima as the same power a criminal who robbed a shopping area had, much to his distress. A man listening also mentions that Septima reflects personality, so Viper must be similar to the criminal, this comment causing Viper to attack the man. Viper also mentions that he vented his anger on small brawls, winning due to his power, but unsure if it was a good idea. He then notices a group, "Maiden Blood" forming around him. The scene then changes to him relaxing with his goons, as one of them walks in and boasts about winning a fight with a rival gang, but forgetting to put the gang's signature handkerchief at the scene, something Viper doesn't care about. Viper asks what the intruder was asking for, as the man replies that two members of the rival gang, LD, thought he wasn't a member of Maiden's Blood, and attacked him, being spooked into running upon seeing he was truly a member. Viper reminds the minion not to get cocky, as he once fought 15 at once, making the goon jealous.

He then notices one of his goons on his phone, listening to music. After the mook answers that he was listening to Lumen's new song (causing excitement from the other grunts, and Viper knows zilch about.), the other goons chatter lovingly about their idol, not impressing Viper. After Viper is shown a picture of the idol (Him being not interested in her looks.), a member makes a snide remark of him preferring with the "REALLY young girls", which quickly enrages Viper, him just replying he just wanted to see if she was real. The man tries to calm Viper down to no avail, as Viper knocks the man out with his Septima.

Viper then returns to his monolouge, calling the goons foolish, but saying it isn't bad hanging out with them, thinking it made him a better person somehow. However, even with them, he still feels empty.

Sometime after, in the track Flame & Water, Viper comes face to face with a crippled member of LD, who explains he has the Septima  "Hydro Pressure", allowing him to shoot water at a high pressure. The gang member attacks Viper, but he blocks the attack. The gangster insists he will be the winner, but Viper mocks him and informs that flames can make water evaporate.  Viper goes on the offensive after, defeating his foe easily, but he notices two people watching him, who reveal themselves as Nova and Jota. Viper asks what gang are they from, assuming they are gang members, beliving them to be adepts, but Nova informs him that they are from Sumeragi, with Viper quickly calling them Adept Hunters. Nova admits that label was unavoidable given other members vicious and unfavorable ways, and admits himself is a hunter, but just wants to talk with Viper to offer working for Sumeragi. Viper rejects the offer and challenges Nova to a brawl, who the latter accepts.

We find out the outcome of the track Justice & Rage, with Viper being unable to successfully to be a match for Nova's Psychokinesis, with Nova defeat Viper beating Viper Glaive-less, and with flying colors. Nova is impressed by Viper's power, but Viper feels upset to Nova, getting upset at what he thinks is his useless power. Jota mocks the angry youth for both not believing in himself, and for a lack of power. Viper says he never even wanted his special ablities, which Nova both takes note of and moves on with the conversation, saying it isn't good being upset. Viper bring up the question of how that a literally explosive Septima can be useful, which Nova brings up that dynamite is both deadly and made to increase safety. This metaphor flies over Viper's head, before Nova explains that his power can be useful if used right, and offers the job once more. Viper continues to refuse the offer due to it's xenophobic goals, which Nova anf Jota accept after several more attempts, and leave. As they leave, however, they do leave a business card and bringing a Lumen concert into his notice, which Viper merely scoffs at.

The final track Viper is in is Daytona's Ignition Point, where he first see Viper walking back to his hideout, where his goons get a little shocked at his messy appearance. Viper dismisses their concerns and implores about the reason all of them are surrounding a computer, before recognizing the song they are listening to being a song from Lumen, being played at her live performance. His minions encourage their leader to listen with successful, but Viper feels a burning feeling inside his heart as he's listening, as he happily declares his new desire for Lumen, much to the joy and shock of his minions. Remembering that Lumen's sponsorship with Sumeragi, he searches for the card, only to realize he threw it away earlier. He then rushes off to Sumeragi, much to his team's alarm.

Viper once more gives a speech, telling he found the group and the truth about Lumen, starting his flaming lust for Joule.

The protagonist Gunvolt frees Lumen in their project to locate and capture adepts throughout the world.

When Gunvolt sets out on a resistance mission to place a bomb inside Sumeragi's biochemical plant, Sumeragi sends Viper on a mission to stop him. Viper meets Gunvolt near the plant reactor and reveals his rage towards Gunvolt for essentially abducting Lumen from Sumeragi; the two fight shortly afterwards. The battle here results in Viper's loss and death.

Viper is resurrected with resurrected Sumeragi adepts, await Gunvolt's arrival at Sumeragi's orbital space station, Firmament, to subdue him in his efforts to topple Sumeragi. Gunvolt ascends to Sumeragi's orbital space station on a mission to topple Sumeragi once and for all. During his ascension, the fallen Sumeragi adepts appear to quash Gunvolt's mission. One such resurrection is of Viper, who ultimately meets his demise yet again. Viper does not make any canonical appearances after this.

Viper, along with the rest of the Swordsman, appears as a DLC boss for the Isle of Dreams. His fight, however, is virtually the same as al the other fights. 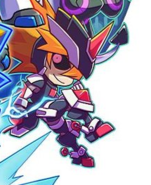 Viper on the cover of Mighty Gunvolt. 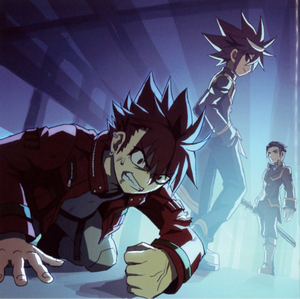 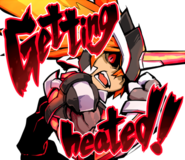 A official LINE sticker of Viper. 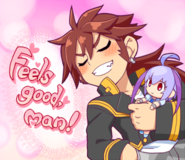 Another official LINE sticker of Viper.
Add a photo to this gallery

Retrieved from "https://villains.fandom.com/wiki/Viper_(Azure_Striker_Gunvolt)?oldid=3652967"
Community content is available under CC-BY-SA unless otherwise noted.