Viper is the secondary antagonist in the 2008 post-apocalyptic film Doomsday.

She was portrayed by Lee-Ann Liebenberg.

Viper is one of the members of the marauders in the post-apocalyptic Scotland in the year 2035, in Glasgow, Scotland. She is the girlfriend of the leader of the marauders, Sol. She has a Maori-like tattoo on her face.

Viper is one of the survivors of the "Reaper Virus" that kllied many people in Scotland in 2008. When a team was sent to find a cure for the Reaper virus that is now infecting and killing some people in London, some of the team was killed by the marauders. The few that survived, Eden Sinclair and Dr. Talbott were captured and she decided to save Eden for Sol. Sergeant Norton and Dr. Ben Stirling were the other surviving members of the team that managed to escape. Sol interrogated Sinclair and after the interrogation, Sol went to a gathering for a feast.

Viper killed Dr. Talbott by roasting him alive so the marauders can eat him for dinner at the gathering. She later on went to the cell block where Eden Sinclair and Sol's sister, Cally, were being held and she that Sinclair escaped out of her cell. Viper fought Eden Sinclair in a sword fight and when Cally managed to grab Viper's head, Eden decapitated Viper with her sword, killing Viper.

Later on, Viper is seen in car chase, with her body and head taped to it with Sol driving while chasing Eden Sinclair, Dr. Stirling, and Cally, with some of the other marauders in pursuit. 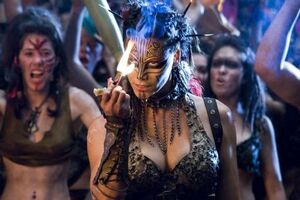 Viper is about to roast Dr. Talbott alive for the feast.

Viper is decapitated by Eden Sinclair. 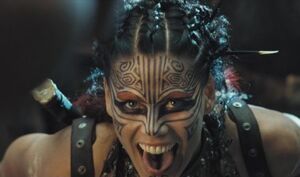 Retrieved from "https://villains.fandom.com/wiki/Viper_(Doomsday)?oldid=3708856"
Community content is available under CC-BY-SA unless otherwise noted.