Commander of the Forces of Nature

Naming and caring for her minions.
Taunting Pit.

Reset the world to its natural state.

Eliminate all humans (all failed).
Help Pit and Palutena take down Hades (succeeded).

Viridi is a character in the Kid Icarus series, making her debut as a major antagonist in the 2012 videogame Kid Icarus: Uprising. She is the Goddess of Nature, the leader of the Forces of Nature, and was a major antagonist in the second story arc, but later becomes one of the supporting characters in the third story arc. While not evil, she is under the delusion that all humans are unworthy of being kept alive because they are cruel to nature, and it was her main goal to eradicate them.

Viridi makes her debut in Chapter 12. After Pit the seething masses she drops a Reset Bomb, a weapon of mass destruction that is able to "reset" a location to its former, more natural state.

Pit sets out to take down the Forces of Nature and Viridi's Reset Bomb Depot by taking down one of Viridi's strongest minions, Cragalanche and later the pod, core of the facility where the Reset Bombs are being made.

She and the Forces of Nature had even more plans that required her commanders like Phosphora and Arlon.

Viridi also appears during Palutena's Guidance. If the player plays as Pit on the stage Palutena's Temple and performs a down taunt for exactly one frame, Viridi may appear and inform Pit on a select handful of characters he's confronting. During the Palutena's Guidance, it has been implied that Viridi has a crush on Link, and that Dark Pit has sided with the Forces of Nature. Dark Pit's wings glow green during his version of the Power of Flight, meaning that Viridi is gifting him with the ability.

In Super Smash Bros. Ultimate's "Adventure Mode: World of Light", Viridi appears as a legendary support spirit. Her ability increases all damage taken to metal opponents. She can be obtained by summoning her with the cores of Xerneas, Alraune, and any neutral and support core, or by defeating her in a Spirit Battle against a Mii Swordfighter and Kirby. She inhabits a Mii Swordfighter wearing her outfit, with the Mii's voice provided by Viridi's Japanese voice actor Makiko Ohmoto. The one-minute time limit means if the Reset Bomb strikes the ground.

Being a Goddess, Viridi is immortal. She is highly intelligent, able to command a large army. She also has some of the same abilities as Palutena, such as giving Pit the ability to fly. However, it is unknown if Viridi can manipulate any kind of plants or vegetation, though it is possible since she is the Goddess of Nature. 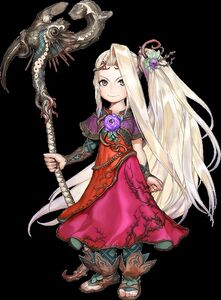