Virus (by the students)

Engineering professor and headmaster of ICE

Writing with two hands at once

Listening to opera music while resting.

Prove that his ideology is right to Rancho (abandoned).

Prof. Viru "Virus" Sahastrabuddhe is the main antagonist of the 2009 Indian film 3 Idiots. He is the arrogant and ruthless engineering professor and headmaster of the ICE university. He despises Ranchoddas "Rancho" Shyamaldas Chanchad for always being rebellious and helping his friends to study easier, and seeks to prove that Rancho is wrong and everyone must go by the traditional ways. Though not intentionally evil, his actions has caused a lot of tragedies and atrocities.

He was portrayed by Boman Irani.

Viru is best known for his arrogance, always believing in the traditional ways and hates being the second best. He teaches this to his students, believing that it will push them to try their best. This also extents to his family, as he forces his daughter Pia to marry Suhas Tandon against her will, although Rancho rescues her from it. A man of culture, Viru likes to listen the opera music and treasures his mustache above all, stating that without it, he feels like wearing nothing.

A strict disciplinarian, he has pushed his son and his two students, Joy Lobo and Raju Rastogi into suicide (although the latter survives). Although all of them are unintentional, he refuses to admit his part for them. This leads to Rancho vowing to challenge Viru, causing a lot of troubles during Rancho's time in ICE. After Viru expels Rancho and the latter's friends from the college for attempted cheating, Pia reveals to him that his son (who's also her brother) committed suicide because he forced him to carry his dream instead of his own. After Rancho helps his daughter-in-law Mona to give birth to her son safely, Viru finally admits his defeat.

Despite his redemption, ten years later, Viru still has some traces of his disciplining ways left, as he still forces Pia to marry Suhas again, although this is also because Suhas claiming to have changed and Pia never telling her family about falling in love with Rancho (who at the time is missing anyways). That said, upon realizing that Raju, Farhan and Millimetre are rescuing her from the wedding, while understandably displeased, he makes little to no effort to stop them, showing that he does change his ways.

Viru is the headmaster of the ICE university. Every day, he likes to listen to opera music and let his personal assistant Govind to take care of him while he sleeps. He first appears at the first day of school ceremony, giving his students a speech about how life is like a cuckoo nest, and so everyone must try their best to achieve the number one status. One day, he finds the student Joy Lobo building a small plane, and tells the latter's father that Joy has been denied of graduation due to failing to submit his project. This puts Joy into depression as he throws his plane into a trash can. Although Rancho, whose passion for engineering is similar to Joy's, picks it up, fixes and completes it, Joy has committed suicide.

In the funeral, Rancho says that it was the stress that the school put Joy under that pushed the latter to suicide, however Viru refuses to believe it. To mock Rancho in front of his students, he challenges the latter to teach engineering, his teaching subject. However Rancho only shows the students the flaw of Viru's ways via a secret test of character before running out from the room, embarrassing Viru. The two's rivalry starts from there. Viru then writes letters to the families of Rancho's two friends, Farhan and Raju, and tells the two that Rancho is a bad influence. Both Farhan and Raju's parents force them to stop hanging around with Rancho as a result. Farhan refuses, but Raju complies due to his family's poor status and shifts rooms to live with Chatur Ramalingham, a student who is devoted to Viru's ways. During the meetings of Farhan and Raju's families, the trio feels hungry and gatecrash a wedding for dinner. There Rancho meets Pia, who turns out to be Viru's daughter and falls in love with her. Pia is currently in an unwanted marriage arranged by Viru with the snobbish Suhas Tandon, although thanks to Rancho's help, Pia manages to dump him.

Later, during Teacher's Day, Chatur gives a speech to the Minister of Education so that the latter can continue to sponsor ICE, but Rancho and Farhan have edited obscene words into the speech. Chatur, being foreign and always blindly reading without thinking, reads it anyways and is thus shamed in front of the school and the Minister, who is displeased much to Viru's anger. Later on, Rancho also has the highest scores in the semester's exam and is thus allowed to seat next to Viru according to the rules, much to Viru and Chatur's disappointment. Rancho then makes a deal with Viru. If Farhan and Raju fail the final exam, Rancho will admit that Viru was right, but if Farhan and Raju can get jobs, Viru will admit that Rancho was right and shave his own prized mustache.

One night, the trio sneak in Viru's house so that Rancho can confess his love for Pia. Before escaping, they piss on his porch, and Viru, having just awakened in time to see it, is not happy with this and threatens to expel Raju unless he acts as a witness against Rancho. Unable to stand against his friend who has helped him to go through so much, Raju jumps through the window in an attempt to commit suicide, but survives and is in comatose. Thanks to his friends (Rancho and Farhan included) and family's help, Raju recovers and returns to his senses. After this, both he and Farhan finally secure their jobs. As part of the deal, Govind shaves Viru's mustache, much to the latter's horror.

Seeking revenge, Viru tries to make the final exam very hard to deny Raju graduation just to spite Rancho. The trio invade the photocopy room and successfully copy the question paper, but Raju refuses to take it as he wants to pass the exam fair and square. Unfortunately, Viru discovers them and decides to expel them all. Pia then reveals the truth about her deceased brother, who actually committed suicide (rather than dying of accident as Viru has believed) due to being unable to live with the stress Viru put him under and being denied of his dream to become a writer for Viru's selfishness. This shocks Viru, who then contemplates his life choices. At the time, his daughter-in-law Mona is nearing-delivery pregnant, but due to the heavy rains she can't reach the hospital. Rancho alongside his friends and the other students then save her and help her to successfully give birth to her son, who's also Viru's grandson. In joy, Viru tells his newborn grandson that the latter can make his own life choices. He then admits defeat to Rancho and gives the latter his prized pen, and promotes him to his top student. The two and the other students end the school year happily.

Ten years later, Viru is seen in Pia's wedding with Suhas, who has claimed to change himself but is in fact still as snobbish as ever. However, the groom turns out to be Raju in disguise and he alongside Farhan and Millimetre rescue Pia from the wedding. Despite not being happy with the turns of events, Viru allows them to go. He would later become Rancho's father-in-law when Mia decides to marry the latter.

Viru at the first day of school ceremony. 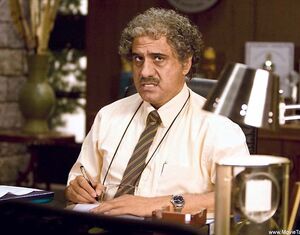 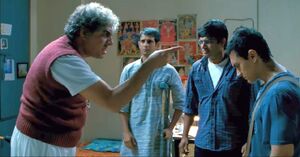