Villains Wiki
Register
Don't have an account?
Sign In
Advertisement
in: Mature, Game of Thrones Villains, Male,
and 48 more

Viserys Targaryen, also called the "Beggar King", is a major antagonist in the A Song of Ice and Fire novels and its TV adaptation Game of Thrones. He is the son of the "Mad King" Aerys II Targaryen and Queen Rhaella Targaryen, younger brother of Prince Rhaegar Targaryen and the older brother of Daenerys Targaryen. He is also Aerys' heir after his brother Rhaegar is killed during Robert's Rebellion. The war, however, turned him into an exile who plots to regain control of the Iron Throne. He styles himself as Viserys Targaryen, the Third of His Name, King of the Andals, the Rhoynar and the First Men, Lord of the Seven Kingdoms and Protector of the Realm.

In the television series, Viserys appears as a major antagonist in Season 1 and a posthumous antagonist for the rest of the series. In the novels, he can be regarded as the main antagonist of Daenerys' POV point in the first novel.

Viserys was born in 276 AC in King's Landing. A tourney in honor of his birth was hosted at Lannisport by Tywin Lannister, but only Aerys and Rhaegar attended at the tourney, leaving Queen Rhaella and Viserys in the safety of the capital.

He tries to browbeat Daenerys into persuading Drogo, but with her new position of authority as khaleesi she begins standing up for herself. After he tries to hit Daenerys, she has his horse taken away, forcing Viserys to walk. This is taboo amongst Dothraki as a man who is not on horseback is no man at all, and earns him the mocking nickname Khal Rhae Mhar, "The Sorefoot King". Khal Drogo later offers him a place in a cart and Viserys accepts, in his ignorance believing it the Khal's way of apologizing to him for the wrong Dany did to him; unknown to Viserys, this is a greater insult then walking on foot, as carts are for cripples, eunuchs, the very old or very young, earning Viserys the new nickname Khal Rhaggat, "The Cart King". At Vaes Dothrak, Viserys gets drunk and again insists that Drogo give him his crown, only for Drogo to tell him that he is no king. Viserys draws a sword — banned in the sacred city of Vaes Dothrak as it is forbidden to shed a free man's blood there — and threatens Daenerys's unborn child. In response, Drogo announces that he is giving Viserys his crown. Belieiving himself victorious, Viserys is horrified when he is instead seized by Drogo's men and he melts down his belt of golden medallions and, after pleading for an indifferent Daenerys to have his life spared, upends the pot over Viserys's head, fatally "crowning" him, though not one drop of blood is split in doing so. Daenerys than says that Viserys was no dragon, because fire can't kill a dragon.

She later names one of her dragons Viserion after him, though only for keeping her alive for years.

Viserys has the silver-blonde hair and purple eyes (blue in the TV series) common in House Targaryen. His face was hard and gaunt, a result of years of bitterness, hardship and rage.

Viserys was ambitious, arrogant, dimwitted, and impatient. He believed strongly in the superiority of House Targaryen, and that they were beyond ordinary men. He was cruel and quick to anger. In his youth, Daenerys remembered him as kind and compassionate, but as he grew older, his instances of compassion and tenderness grew few. According to Daenerys, Viserys was a kind boy in their youth, but years of crushing disappointment, constant persecution and hard living turned him bitter, angry, cruel and delusional. Viserys's vicious personality is considered part of the "Targaryen madness", which is said to be part of the long generations of incest in House Targaryen in order to "keep the bloodlines pure", being the last dragon-taming Valyrians left in the world. 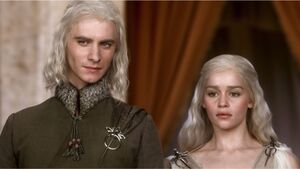 Viserys and Daenerys side by side. 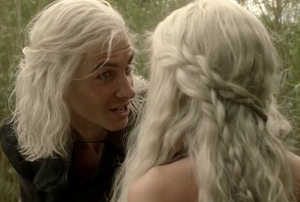 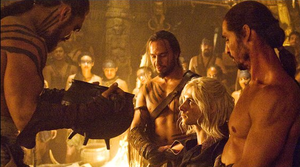 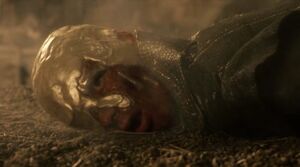 Viserys' death after receiving his "crown."