The Visitors are the titular protagonists of The Visitor horror video game series. They are a violent race of predatory aliens that come to Earth, and seek to kill, devour, and/or assimilate all life that they find.

In the first entry to the series, a lone Visitor comes down to Earth in a small meteor. The meteor lands in a lake, and the Visitor climbs out and promptly is devoured by a frog. However, the Visitor eats the frog from the inside out, giving it an elongated tongue. Using a fishing pole, the Visitor launches itself to a nearby house, where it encounters an angry cat. Using a spider as a distraction, the Visitor sneaks past the cat and manages to get behind it, before entering in through the cat's butthole and devouring it from the inside out, growing bigger and gaining a pair of claws.

The Visitor enters the house, where an old woman and her grandsons live. Using its telekinetic powers, the Visitor causes a series of events that result in her slipping on a puddle and hitting her head on an open drawer with a knife, killing her. The Visitor sneaks into another room where two of the grandkids are sleeping. It assimilates a fish, gaining fins. Using bird seed as bait, the Visitor lures a bird nearby, then devours and assimilates it, gaining a beak and wings. The Visitor then swoops down and enters one of the kids through their mouth, bursting out larger. The Visitor then impales and kills the other, then makes its way to the bathroom where the last one is hiding.

Depending on player actions, the Visitor either eats the person's head, or is defeated by the human by either being shot to death or electrocuted with a hairdryer in a bathtub (the latter will still result in the human's head being eaten).

In the second entry, another Visitor comes down in a meteor similar to the first one. This Visitor will attack a raccoon, assimilating it and gaining claws. The Visitor will then make its way to a trailer with a skunk and a spider outside. The Visitor can devour the spider to gain webbing, and entangles the skunk. It then attacks the skunk and assimilates it, gaining skunk spray. It then sprays into the trailer, causing the man inside to open a window to clear the air, letting the alien inside.

Once inside, the Visitor comes across a drunken man, his dog, and pet scorpion. After eating the scorpion and gaining a stinger, the Visitor can then use its powers to drop hot dogs out of the refrigerator, causing the man to believe the dog raided the refrigerator. The man will get angry and send the dog outside, where the Visitor can entangle it in webs and jump down and assimilate it, gaining fangs and jaws. The Visitor can then sneak back inside, use a can of bug spray and a lighter to distract the man, and then sneak under the table he is sitting at and kill him by ripping out his neck and jaw. This will alert the man's wife, who will grab a gun.

The Visitor makes its way to the woman's room, where the player can choose to suffocate her with webbing, envenom her with the stinger, decapitate her with its fangs, rip her heart out with either the claws or stinger, or burrow into her body and assimilate her.

The Visitor: Massacre at Camp Happy

In the third entry of the series, Visitors come down and attack animals and people camping in a place called Camp Happy. The Visitor devours different animals to gain different abilities (such as claws, winds, or fins) and uses them to solve puzzles and mazes that will lead to the human victims. A new Visitor comes down for each level, and if the Visitor dies, a new one will come down to replace and eat the corpse of the old one. The game continues until the Visitors have killed ten humans and countless animals.

The visitor comes down in a meteor similar to all the other games, the meteor lands in a neighborhood. The visitor uses its telekinetic powers to unlock the door of the cat lady's house, then the visitor goes into the kitchen, blends up a fish to lure the orange cat into the kitchen, the visitor hides in the cat food and slips into the orange cat's mouth, making the cat swallow it and causing the cat to excrete its internal organs. The visitor then proceeds to eat the cats internal organs.

The visitor then goes back into the living room where it uses a laser toy to lure the white cat into jumping on a dresser, then uses an exercise ball to get the cat to jump off the table and grab onto a bag hanging on a shelf knocking over a shelf, then has the cat run up the shelf chasing the laser and jumps straight into a ceiling fan shredding the cat to pieces, the visitor then eats part of the shredded cat.

At the end of the game, the visitor grows bigger and develops cat-like jaws.

In the second cut, the visitor distracts the lady while she's eating, spikes her food with popcorn kernels tricking her into eating them. The visitor then turns up the temperature in the room causing the popcorn to cook, the kernels in the lady end up cooking as well causing her head to explode.

After killing the cat lady and her cats, the visitor moves on to a house with three teenage girls and a guy. The visitor is unable to get in the house so it makes a catapult from a bucket and a rusty piece of metal, it uses the catapult first to launch a stone at a bird feeder breaking it open, the bird food is then used to lure a squirrel onto the catapult, the visitor then catapults the squirrel into its mouth, eating the squirrel and gaining claws. Which now lets the visitor climb into a vent, getting into the house.

The visitor then gets into a hallway near a bedroom where the three teenage girls are, the visitor spies on the girls figuring out what they want. The visitor uses a computer to pretend to be the guy it just killed in the laundry room, it gets onto two of the girl's pages liking and disliking their pictures making them think it's the guy, the girls fight over the guy and after seeing what they think the guy liked, they try to go out to find stuff to recreate those things, which then the visitor uses this to lure the girls into traps.

The visitor first sets up a plate with tortilla chips on it, uses yellow paint on it to make it look like cheese then puts some vegetables on it recreating one of the things on the girl's posts, one of the other girls attempts to get a picture of the plate to use it to win the guy over, the visitor then gets on the counter in front of the girl, slices her throat open with its claws, grabs the girl's tongue through her throat, then uses her tongue to catapult the plate of tortillas into her neck, slicing her neck more and killing her. The visitor then proceeds to eat her head.

The visitor then gets a framed picture of a beach out of a closet, hangs the picture on the wall then hangs a hat on a nearby coat rack tempting the visitor's third victim into stopping for a selfie for another attempt to recreate a scene to win the guy. The visitor then crawls up the girl's leg, hides in the girl's hair then chews its way through the girl's head bursting out of her face.

The visitor then grows more and starts eyeing another house hinting that there would be another game, but however no new games have been released.

There are three director's cut scenes of three different deaths, one being the visitor gets inside the man, using mind control on him and tricks one of the girls into kissing the guy, where then the visitor comes out of the guy's mouth, rips the girl's tongue out, killing the guy and the girl.

The second scene the visitor is in the kitchen with another one of the girls, the visitor mixes window cleaner and bleach together creating a fatal poison, the visitor then puts the chemical mix in the oven, cooking the mix, the chemical smell gets so bad it causes the girl to have a fatal allergic reaction.

Visitors are unnaturally violent and aggressive, and are shown to not always eat their prey. It is unknown if feeding is needed, but from the events of the games, it is shown that most of the time feeding takes place simply to gain new abilities that will allow it to kill larger things in more violent ways. Visitors kill for apparently no reason, and perform their killings in the most violent ways possible. 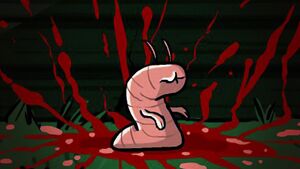 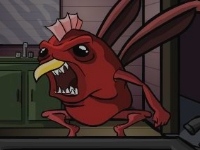 A fully mutated Visitor from the first game.

Chart showing the evolution of the first game's Visitor. 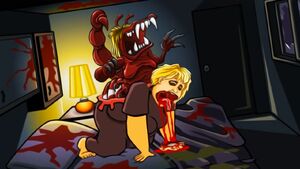 A fully mutated Visitor in the second game. 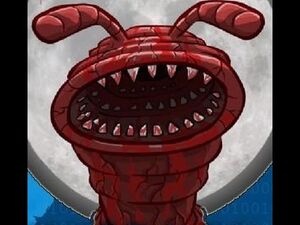 The Visitor in the third game. 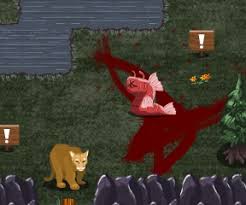