Committing mass murder.
Transferring his consciousness into others.

Achieve immortality (partially succeeded).
Defeat the Jedi and the Republic.
Defeat and imprison Revan.
Rule the Eternal Empire and maintain control over Zakuul and the rest of the galaxy (all temporarily succeeded).
Corrupt and take over the Outlander's body to use it to reclaim the Eternal Throne.
Consume all life in the galaxy and become a god (both failed).

Darth Vitiate is the main antagonist of the Star Wars Old Republic era.

Originally born as Tenebrae, he was the Dark Lord of the Sith who reconstituted the Sith Empire after the Great Hyperspace War and went on to rule it as the Sith Emperor for more than a millennium. Eventually, he grew tired of Sith ideology and created the Eternal Empire, which he ruled as Valkorion, planning to consume almost all life in the galaxy in order to become an all-powerful god and rule the rest of the universe unchallenged. He is also the archenemy of Revan.

He is voiced by Doug Bradley as Vitiate, who also played Pinhead from Hellrasier. As Valkorion, he is voiced by Darin De Paul, who also voiced Ardyn Izunia from the Final Fantasy series, Trade Prince Gallywix from World of Warcraft: Legion, Samuel Hayden from 2016s Doom, Zeron Alpha from 3Below, J. Jonah Jameson in Marvel's Spider-Man video game, and Bular from Wizards. As Tenebrae, he is voiced by Anthony Skordi.

Even as a child, Vitiate possessed immense strength in the Force, and his abilities began to manifest themselves at the age of six. He used his newfound powers to snap his adoptive father's neck with a thought, and tortured his mother with the Force for months while feeding on her fear and pain. As his powers grew, Vitiate continued to gorge himself on the fear and suffering of those whom he tortured in public executions. He was also a master of many more traditional dark side powers like Force lightning and made use of the ability during most of his long life to torture, incapacitate or outright kill his enemies.

Vitiate's power at the age of thirteen was great enough for Marka Ragnos to acknowledge the teenager's strength and grant him the title of Lord Vitiate. Soon afterwards Vitiate gained a reputation as a scholar, spending much of the next century studying the secrets of the dark side. He soon exhibited an immense knowledge of Sith sorcery, becoming one of the most powerful practitioners of both Sith magic and alchemy along with devised complex rituals to warp life itself. Another one of Vitiate's specialties was in the domination of his opponent's minds, as he was able to dominate the minds of eight thousand Sith Lords and bind them to his will.

He then used their combined power to perform the most complex ritual of Sith magic ever performed, ripping the Force from the entire planet of Nathema and absorbing the combined life force of every living thing on the surface. Lord Scourge suspected that Vitiate had not only absorbed the lives of those who had died in the ritual, but was in fact feeding off their spirits to sustain his own throughout the centuries that followed. He grew so powerful after this ritual that he even felt confident that, after fueling enough conflict and destruction across the Galaxy, he could even repeat this feat on a galactic scale in hopes of turning himself into an all-powerful god. During his time as the Sith Emperor, he also came to completely dominate the Sith ritual of Essence Transfer in order to prevent his spirit from dying; mastering the technique to such a degree that he was even able to split his soul with varying degrees of direct consciousness and control across multiple bodies while his original body was kept hidden away as a way to gurantee his survival, meaning that even if his main vessel was destroyed, Vitiate's dark spirit would just return to his original body to reform and eventually return once again. 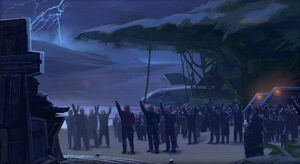 The Emperor on Dromund Kaas. 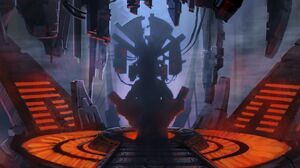 The Emperor on his throne. 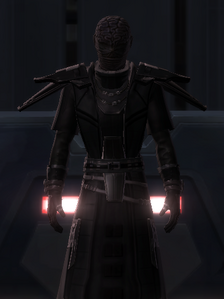 The Emperor in his Space Station. 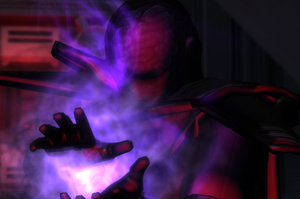 The Emperor summoning a powerful blast of Force Lightning. 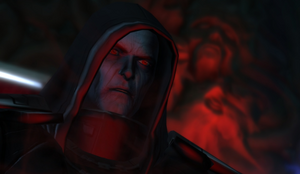 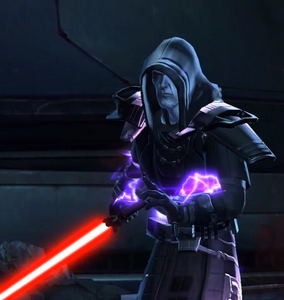 A duplicate of the Emperor. 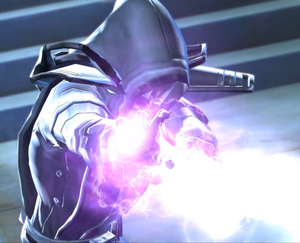 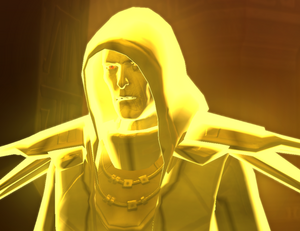 The Emperor appears in a vision of the Hero of Tython. 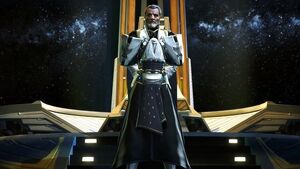 Valkorion in front of the Eternal Throne. 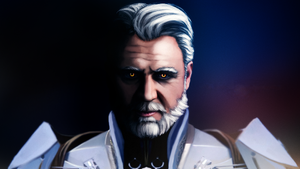 Close up of Valkorion. 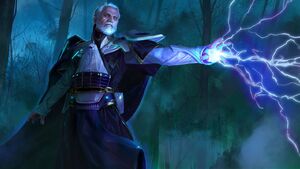 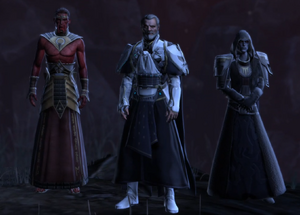 The primary incarnations of Vitiate.