Vivian (The Wolf Among Us)

The Girl with the Ribbon

Kill herself so she can free Nerissa and the rest of the other strippers from her spell (succeeded).

Vivian is an antagonist featured in The Wolf Among Us. She is a hostess at the Pudding & Pie working with Georgie Porgie.

Vivian first appears when Bigby comes to the Pudding and Pie to interrogate Georgie. She lets him into the building, giving her usual spiel to attract new customers, then stands aside for Bigby to speak to Georgie.

Vivian is seen attending Lily's funeral, along with Nerissa. When Holly gets angry at Bigby for showing up uninvited, Vivian tries to calm her down and put the focus back on the ceremony. Later, she, Nerissa, and Lawrence stand back and watch while the Tweedles confront Bigby, and a monstrous Holly and Gren.

Later, Bigby and Snow show up at the Pudding & Pie looking for Crane. After pushing past Georgie and breaking into the back room, they find Crane violently shaking Nerissa while Vivian tries to get him to stop. Bigby separates them and questions Crane while the two dancers watch. When Snow starts to think that Crane may not have committed the murders, Vivian angrily retorts, saying that the only reason he would come to the club would be to cover his tracks. She demands to know who else it could be, but they're not sure. Bigby places Crane under arrest and marches him out of the building while Vivian and Nerissa stand by.

Vivian escapes with Georgie to the Pudding & Pie. Vivian's last words were "I can't pretend anymore", here she's referring to the fact that she has to pretend she doesn't care about anyone at the Pudding & Pie. But, if you listen even close, as she takes the ribbon off, she whispers "Goodbye, Georgie." She also kills herself because she hates herself when looking at Nerissa. She commits suicide by pulling the ribbon releasing the spell of the other prostitutes, most importantly Nerissa. She's able to release the spell because she's the original "Girl with the Ribbon", all the other ribbons were made from hers. 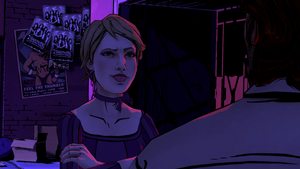 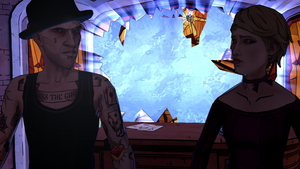 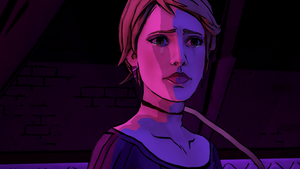