Viviano Westwood is a minor antagonist of JoJo's Bizarre Adventure: Stone Ocean. He is a prison guard at Green Dolphin Street Prison sent to assassinate Jolyne Cujoh both due to being under Enrico Pucci's employ and Survivor's brainwashing. He wields the Stand Planet Waves.

In JoJo's Bizarre Adventure: Eyes of Heaven, he was voiced by Takaya Hashi.

Viviano works as a guard in Green Dolphin Street Prison. He is first introduced to help move Jolyne to the punishment ward. As part of a bet, he and Sonny Likir barge into Jolyne's cell with a floodlight. Sonny later also sprays her with a hose, but some of the water gets on Viviano, causing a small pushing fight that later explodes to a full-on brawl. After Viviano's victory, he takes out his stand and attacks Jolyne. It is revealed here that Survivor is to blame for the sudden outburst of fighting. Jolyne does knock out the man at first, but Viviano reawakens with his Stand disc visible and continues the fight. Now with Jolyne on the loosing end of the fight due to Viviano's strength, he summons a meteor to hit her once he has her in a headlock. Jolyne holds him off for several volleys by weakening his grip with Stone Free, and then she uses one of his boots to knock him into the path of his own meteors, with Stone Free dealing a final headbutt for good measure.

Viviano Westwood is a man with a muscular build and of a average height. He has a square face, black eyes, and black hair. He wears a standard prison uniform. After Sonny Likir punches him, a good part of his mouth is revealed, including some of his gum and more of his teeth.

Viviano is a unpleasant figure to the prisoners of Green Dolphin Street Prison, despising the prisoners as society's lowest and often antagonizing them.

With Planet Waves, Viviano is able to attract meteors to it's user, causing massive damage to anyone hit. The meteors disappear just before making contact to protect the user, but this can be bypassed by putting a object in their path, the meteors being protected from the fall and hitting at full strength. Even without his Stand, Viviano is physically strong due to his profession, with various techniques to prevent struggles from troublesome inmates. 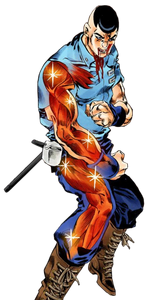 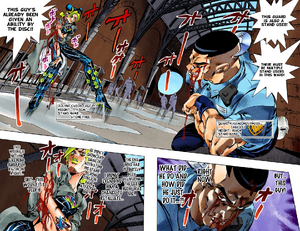 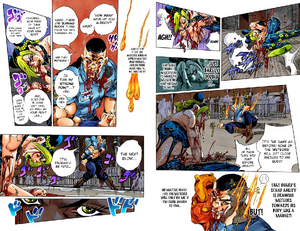 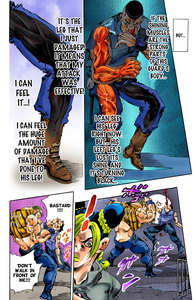 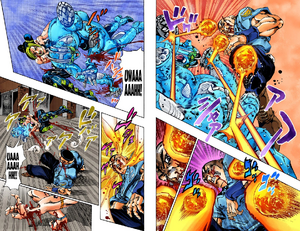