Villains Wiki
Register
Don't have an account?
Sign In
Advertisement
in: Mature, Prince of Persia Villains, Pure Evil,
and 61 more

Prince of Persia: The Sands of Time

Vizier to the Maharajah (formerly)

Conquerer and self-dubbed God of Time

Magical prowess from his staff

Kill the Prince of Persia (failed).

Kill Kaileena (succeeded).
Obtain the power of the Sands of Time to become an immortal god and rule everything.

The Vizier is the traitorous adviser of the Maharajah and the main antagonist of the Prince of Persia videogame series as well as the archenemy of the Prince.

Journey to the Island of Time

The Vizier was the chief adviser to the Maharajah of India, but was known to suffer from consumption. He was searching for a cure for his illness, he found out about the Island of Time, which was said to contain great marvels. The Vizier persuaded the Maharajah to go to the island with him and they found the Dagger of Time and an enormous hourglass containing the Sands of Time. The Vizier also discovered a staff that gave him magical abilities.

At some point in time, the Vizier developed feelings for Saurva’s sister, Sindra, of the daevas. His infatuation became so great, he forced Saurva to steal the Box of One Thousand Restraints by threatening to kill his wife if he did not. When he returned with the box, after killing many Indian soldiers in the process, the Vizier killed his wife anyway and imprisoned Saurva and the daevas in the Box of One Thousand Restraints when Sindra refused him.

The Sands of Time

The Vizier desired the power that the Sands of Time offered, but both the Sands and the Dagger of Time were locked away in the Maharajah's treasure vaults. He plotted to steal both by secretly making an alliance with King Sharaman of Persia to overthrow the Maharajah, in exchange for his pick of his masters’ treasures. But the Vizier’s plan were upset when Sharaman's son, the Prince, took the Dagger of Time and the hourglass was given to the Sultan of Azad. But he bided his time and when the Sultan was captivated by the lights inside, the Vizier told him that they came from the marvels inside.

The Prince used the dagger to open the hourglass, unleashing the Sands of Time, which infected everyone, except the Prince, the Vizier, and the captured Princess Farah, thanks to items in their possession. The Prince and Farah formed an uneasy alliance and fled with the dagger. They then fought their way through the sand monsters as the headed for the Tower of Dawn where the Vizier had placed the hourglass in the hopes of returning the Sands of Time to it. The two succeeded, but Farah fell from the tower to her death and the Vizier offered the Prince immortality, but he refused and rewound time to back before the betrayal. He then went to Farah, who had no idea about the adventure they would have, and the Prince warned her of what would happen if she didn’t listen to him.

The Vizier appeared and attacked the Prince, at first saying that he was protecting Farah, but soon admitted his traitorous intents. As the fight began to end, he revealed his new plan, to kill the Prince and Farah then pit the Maharajah and Sharaman against each other. But the Prince managed to kill the Vizier and then gave the Dagger of Time back to Farah.

But the Prince later changed time to prevent Kaileena from dying and thus preventing the Sands of Time from being created. This made it so the battle between the Vizier and the Prince never happened and the Vizier never died at his hands. When he and the Maharajah went to the Island of Time, they found only the Dagger of Time, the empty hourglass, and books telling them the story of the Empress of Time. They returned to India, but a voice from the dagger called out to the Vizier, telling him to go to Babylon. The Maharajah refused to go to the city, so his adviser overthrew and killed him, taking control of his kingdom.

The Vizier led a Scythian army on the city of Babylon and made his way into the city palace, at the same time that the Prince and Kaileena were returning. They were separated when their boat was destroyed by a flaming catapult and Kaileena was taken by the Vizier’s soldiers. In the palace courtyard, the Vizier killed the Empress of Time with the Dagger of Time, unleashing the Sands of Time and then stabbed himself with the dagger. The sands were transferred into his body and infected all around him, including the Prince, who managed to resist the infection and escape with the dagger. The Vizier underwent a transformation into a strange, winged being and called himself Zurvan the god of time. He began to destroy what remained of his enemies and seek out the Prince. The Vizier later captured Farah and cast the Prince into the palace well system then planned to transform her into his immortal queen. But the Prince defeated him, finally finishing him with a stab from the Dagger of Time and as he died, he said "This is not what the dagger promised".

The Vizier is shown throughout the games to be a man who is obsessed with the concept of immortality and later godhood and willing to do anything in order to achieve it. He is shown to be rather intelligent and manipulative, as he plays two rulers against one another and later attempts to do the same to Prince in order to retrieve the dagger of time while promising to make him immortal in return. He is extremely traitorous towards anyone other than himself as he is willing to throw the entire world into chaos provided he gets what he desires. Later it emphasizes his desire for absolute power and control; after he absorbs the Sands of Time he decides to rename himself Zurvan and proclaims himself the God of Time. He does show some degree of delusion as he ultimately believed if he took over and made it to where everyone did as he wanted he could make everything progress at a faster rate thus making it better world.

As a human, the Vizier possesses great magical powers such as creating copies of himself, courtesy of his staff, which can also be used as a melee weapon.

After becoming Zurvan, the Vizier gained powers over the Sands of Time and many godlike powers. He gained incredible telekinesis, immortality, the ability to transform others into Sand Creatures, the ability to fly, create storms, shoot out blast of energy and control over other Sand Creatures, along with superhuman strength, durability. It has been theorized he can manipulate Time itself this is never shown. He apparently allowed some of his followers to retain free will but others became mindless puppets hellbent on fulfilling his wish to control everything.

The Sands of Time 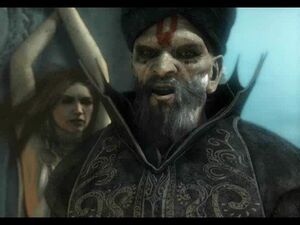 The Vizier about to kill Kaileena. 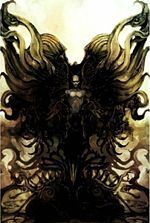 The Vizier as Zurvan. 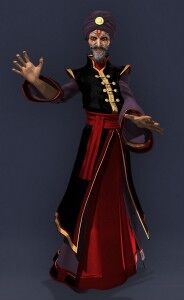 The Vizier in the Sands of Time.

The Vizier with Sharaman and the Sultan as the hourglass is about to be opened.