Outwit and defeat the Masked Pirate "Man in Black" (both failed).

Vizzini is a major antagonist in the 1973 fantasy novel The Princess Bride by the late William Goldman, and its 1987 live-action film adaptation of the same name. He is a Sicilian criminal mastermind who is hired by Prince Humperdinck to kidnap Princess Buttercup and kill her in order to incite a war between Florin and the country of Guilder. He is always accompanied by his two cohorts, the giant Fezzik and the master swordsman Inigo Montoya.

In the film, he was portrayed by Wallace Shawn, who also played Dr. Elliot Coleye in My Favorite Martian, Taotie in Kung Fu Panda: Legends of Awesomeness, and Bertram in Family Guy.

Vizzini is a criminal mastermind who believes himself to be the smartest man in the world, considering Plato, Aristotle, and Socrates to be "morons" in comparison. Though this is clearly an exaggeration, Vizzini is undoubtedly very intelligent, acting as the brains of the trio hired by Prince Humperdinck. Between the three of them Vizzini is the only one of them who can really be considered evil, as both Inigo and Fezzik are bothered by the idea of killing Buttercup, whereas Vizzini is not. Vizzini is also shown to be impatient and hot-headed, and has little tolerance for failure. He also had a tendency to belittle both Fezzik and Inigo, and say the word "Inconceivable!".

He and his cohorts are first encountered by Buttercup during a horseback ride in the forest, claiming that the three of them are "poor, lost circus performers". However, he reveals his true colors when he has Fezzik to pinch a nerve in her neck to render her unconscious. Afterwards he rips off part of a Guilder army officer's uniform and puts it on Buttercup's horse, then has the horse sent back to Humperdinck's castle. They then sail across the ocean to Guilder, planning to kill Buttercup when they get there and leave her body on the Guilder frontier in order for Humperdinck to have an excuse to start his war.

As they are sailing, they start to be followed by the Revenge, the ship belonging to the Dread Pirate Roberts (later revealed to be Buttercup's beloved, Westley), which greatly annoys Vizzini. After arriving at the Cliffs of Insanity, the three of them scale the cliff, but Westley follows them, prompting Vizzini to threaten to fire Fezzik. When they get to the top of the cliff, Vizzini orders Inigo to defeat Westley while he and Fezzik make for the Guilder frontier with Buttercup. After Westley defeated Inigo, Vizzini is shocked and orders Fezzik to defeat him "his way"; i.e. bludgeon him with a rock. However, Fezzik ultimately fights Westley in a fair handfight and loses.

When Westley finally catches up, Vizzini has restrained Buttercup by blindfolding her and tying up her limbs so that she cannot flee. Using a boulder for a table, the criminal enjoys a meal, whilst holding a knife to the future queens throat. As Westley approaches, Vizzini threatens to kill Buttercup if he comes any closer. Westley's offer of a deal is rejected, with both men agreeing that they have reached an impasse. As Vizzini points out: it would not be a fair for them to fight physically as Westley would win. Nor however, would it be appropriate for them to fight mentally as Vizzini has his opponent outmatched.

Hearing this boast, Westley comes up with an idea. Feeding into Vizzini's arrogance and narcissism, he challenges the kidnapper to a battle of wits. Confirming that the winner gets to keep Buttercup and that the loser will die, Vizzini happily accepts. Putting away their weapons the two men sit across from each other. As Vizzini pours two glasses of wine, Westley extracts a small cylinder from his belt, which he offers to his opponent, who sniffs it but follows the instruction not to touch it. Westley explains that the substance within the cylinder is called iocane powder, a deadly poison which has no smell or taste that is instantly dissolvable.

Picking up the two goblets, Westley turns away so that Vizzini cannot see what he is doing. Turning back around, the would be rescuer places a cup of wine in front of each of them, then issues Vizzini his challenge: where did he hide the poison. Westley says that once Vizzini decides, both men will drink and discover if he was right. Stalling for time, Vizzini gives several long reasons as to why he should pick one drink or the other. In the end, Vizzini tricks Westley into turning his back, then switches his goblet with Wesley's (believing his glass to be the poisoned one).

Confident with his decision, Vizzini (struggling to control his laughter) acts as if nothing has happened and says that they should drink. He watches excitedly as Westley downs what he believes to be the lethal dosage, before happily sampling the contents of "his cup. As the pair replace their now empty goblets, Westley casually tells the overconfident criminal that he guessed wrong. Unable to contain himself any longer, Vizzini breaks into raucous laughter, gleefully telling his opponent about the switch. He then boasts confidently about his supposed victory, laughing all the while, only to stop mid-laugh and keel over dead.

Victorious, Westley removes Buttercups blindfold and restraints. Turning to look at Vizzini's lifeless corpse, the future bride expresses her astonishment at the risk Westley took by poisoning his own cup. It is then that Westley reveals his trump card; he had in fact poisoned both glasses. The reason he is not dead is because Westley, through careful ingestion and training, has built up an immunity to iocane powder. This means that Westley had the so called criminal mastermind outmaneuvered right from the start and Vizzini would have lost no matter what he did. 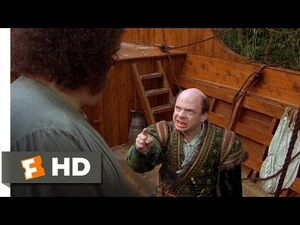 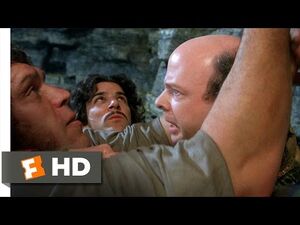 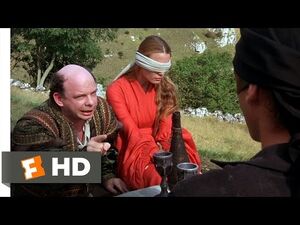