Get Danny to be his adopted son (failed).
Kill Jack Fenton (failed).
Torment Danny and rule the world (failed).

He was voiced by Martin Mull.

Vlad Masters was the childhood friend of Jack Fenton, the father of the series' protagonist, Danny Fenton. They were working together on a science project, trying to create a portal to the ghost world, when the project exploded and infected Vlad with "ecto acne". Believing himself to be hideous, he assumed he was unworthy of his true love, although Maddie never truly loved Vlad as revealed in Masters of All Time. He held a grudge against Jack Fenton since, believing his infection to be Jack's fault. In the final episode, a TV special titled "Phantom Planet", he gets hit by an asteroid. It is unknown if he survived, though since it was rather comical it was implied that he did.

Aside from trying to gain a family by winning back his college love and even get Danny to be his adopted son, he tries to gain power, in all ways he can. Throughout the series he makes life hard for Danny, hoping to break his will. Vlad had even made attempts to clone Danny as well in order to sate his desires for a family. At the beginning of the third season, Vlad seems to lose interest in having Danny as a son and simply sought to torment Danny. He even goes so far as to become mayor of Amityville and start a campiagn against ghosts despite being half-ghost himself. In "The Ultimate Enemy" special, he accidentally creates Dark Danny in an attempt to help ease the emotional pain Danny had been going through.

Vlad's general outer appearance showcase him as a well to do man: rich, debonair, obsequious, charming, suave, creative, diabolical, manipulative, knowledgeable, intelligent, and mysterious, but deep down he has Narcissistic personality disorder. He plans out his well strategized ideas to get what he wants, when he wants it, showcasing patience as well as a slick side. He isn't above using others as his pawn in his well played game of chess to reach further into his goals, never giving up when he is down and going into another phase of his multiple plans. To compensate for his losses, Vlad savors the small personal victories (such as in "Bitter Reunions" where he lost the battle, but pointed out Danny's blackmailing before leaving). When under stress, he frequently shouts out snack names ("Oh, butter biscuit", "Oh, sugar cookie", etc). He usually works alone, but has required help from Skulker several times, as well as the vulture ghosts, ectopusses, and the failed clones of Danny he created, like Danielle Phantom. It is also probable that he struck a deal with the Fright Knight.

However, he is a complicated soul, often a double edged sword as he uses the wrong methods (killing, stealing, etc.) to gain the right, namely his painful loneliness and wanting acceptance of love which he frequently shares with Maddie and especially Danny or to try and gain the things he can't have (Maddie and Danny). Unfortunately this is also used to his disadvantage when his emotions were often used to trick him into losing a battle. However, the fact that he retains such emotions shows that he is not above redemption.

Though he is completely influential and powerful, (having more than 20 years of ghost experience as compared to Danny), Vlad is not invincible. Like other ghosts (and half ghosts), Vlad is emotional and vulnerable to the various (Fenton) ghost gadgets. Danny's Ghostly Wail (a sonic scream) and Ghostly Ice (Cryokinesis) are also clear advantages, seeing as these are powers that Vlad seems to lack, giving Danny a substantial edge, while Vlad's powers have remained consistent throughout the series. His arrogance has also proven to be a significant disadvantage; on one occasion when he fought Jack as Plasmius- Jack, naturally, being unaware of his identity as Vlad Masters- part of the reason for his defeat was the fact that he was so surprised at Jack's ability to successfully battle him that he didn't launch any effective attacks. He (like all ghosts) is also powerless against the anti-ghost element Ectoranium, which ultimately leads to his downfall and the realization of his own foolishness. 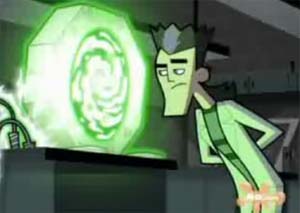 Vlad, just moments before he would get his ghost powers. 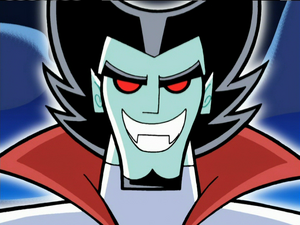 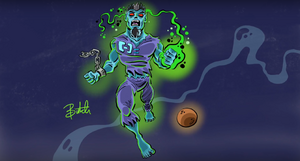 Vlad Plasmius, 10 Years Later.
Add a photo to this gallery

Retrieved from "https://villains.fandom.com/wiki/Vlad_Plasmius?oldid=3490498"
Community content is available under CC-BY-SA unless otherwise noted.