Aristocrat
Patron of the Crimson Circle

Vladimir, also known as the Crimson Reaper, is a villainous playable character in the fantasy MOBA videogame series League of Legends.

An immortal hemomancer who has manipulated Noxian politics since the dawn of the empire, Vladimir poses as a flamboyant aristocrat in hopes of creating his own cult of personality from the shadows.

The 56th champion added to the game, Vladimir was released on July 27, 2010, and can be played either in the top lane or the mid lane.

He is voiced by Kevin M. Connolly in League of Legends, and Jason Spisak in Legends of Runeterra.

Vladimir is an ancient and manipulative figure that has existed since before the empire's creation, and has made his mark on its history. Although he himself lost track of his own past, an old story tells of a prince held hostage by the Darkin and taught their magic of blood and flesh from them out of him being worthy of the honor. With time, this figure grew cold and cruel to his subjects, to which the Darkin was amused by. However, the Darkin were eventually felled by Vladimir, and with it, their magic forgotten.

Vladimir, now alone in access to his own magic, driven to near madness by the death of the Darkin, and having great power, is said to have done this countless amounts of time to gain his own power. During the rule of Mordekaiser, Vladimir was said to be a fiendish burden on eastern Valoran, having the tribes worship and sacrifice for him. It is only when LeBlanc approached and managed to have him work with her with the promise of power with her in the Black Rose. Despite his place however, Vladimir doesn't manipulate behind the scenes, but he did do a stint with the noble courts and help use his magic to help find it a new home among the army, aristocrats, and his own cult forever known as the Crimson Circle.

When Jericho Swain took power over Noxus, Vladimir put on another facade to join the political world as a enemy of the Trifarix council. However, it is possible Vladimir made his own return too quickly, as Swain grows suspicious of his true age and deeds. But as is, Vladimir sits among his past triumphs and digging into the empire's own state, desiring to continue doing what he does best, gaining power.

In game, Vladimir takes the role of a battlemage type character, mostly focused around his powerful blood magic and healing himself with it. Vladimir can drain the enemy's HP and eventually boost his speed for some time with Transfusion, set up a slowing and damaging pool of blood (in which Vladimir can travel faster and is healed if someone is in it) with Sanguine Pool, charge up a powerful burst of blood with Tides of Blood, and infect enemies with a damage-increasing and powerful (eventually healing to Vladimir) attack known as Hemoplague.

Vladimir likes to manipulate Noxian politics from the shadows, but as an aristocrat, he still enjoys extravagance and prestige. Despite keeping himself hidden for decades at a time, Vladimir will sometimes hold large parties among the noble courts under the guise of an eccentric, charismatic and flamboyant socialite. He often makes puns about blood to entertain his guests, showing he has a sense of humor. Of course, this is all an act; Vladimir's true nature is meant to be hidden from the public eye at all costs.

An arrogant nobleman, Vladimir likes to be worshiped by all, building a cult of personality around himself among his closest followers. However, Vladimir's obsession with blood magic leads him to participate in many activities most Noxians would shy away from. He is shown to have a masochistic side, wearing knives on his clothing without caring if he is hurt or not. Vladimir is even shown to enjoy harming others, encouraging such masochism from his young cult followers. Other Noxians are often unsettled when they meet Vladimir, with Draven describing him as "creepy", and Darius of the Trifarix referring to him as a "creature" who should stay out of his way. Nevertheless, Vladimir is determined and patient in his goals, and has every intention of manipulating history from the shadows for centuries to come. 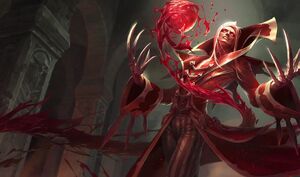 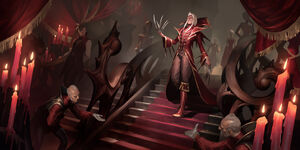 Vladimir as he appears in Legends of Runeterra. 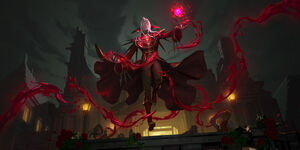 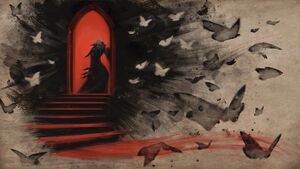 Vladimir in "Art is Life". 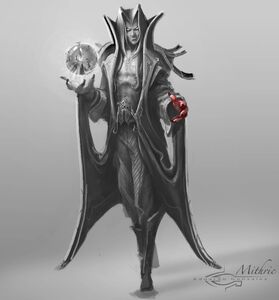 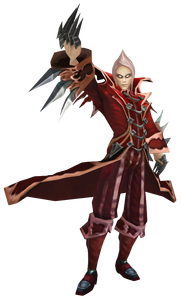