Vladis Grutas is the overarching antagonist of the Hannibal book series by Thomas Harris and their film and television series adaptations, serving as the main antagonist of Hannibal Rising.

He is the Nazi collaborator leading six former Lithuanian militiamen, and is indirectly responsible for transforming Hannibal Lecter into the cannibalistic serial killer he is today due to being responsible for the murder and cannibalization of his infant sister.

He was portrayed by Rhys Ifans, who also played Adrian in Little Nicky and Curt Conners/The Lizard in The Amazing Spider-Man.

Grutas was a Lithuanian war criminal during World War II, that led a group of men throughout battlefields looting riches and other resources. Of all his men, he was the most vicious and had the strongest reputation, even being put on trial at the Nuremberg Trials however walked free due to a witness "having acid poured down her throat".

Near the end of the Second World War, he led a group of looters through the battlefields obtaining whatever riches and resources they could muster. The group encountered Berndt after he traveled back to the Lecter Castle to retain their food and other resources, where he was captured and brought into the castle that had become occupied by Nazi Forces. Grutas and his group were asked by the SS Major how they would dispose of locals (if they were Jewish). Stating that if they wish to be "SS", they should prove it. Grutas then orders Zigmas Milko and Bronys Grentz to kill the Jewish cook that worked for the Lecters, with Milko being the one to deliver the shot. Enrikas Dortlich then grabbed Berndt, restraining him while Grutas questioned him on first if he was a gypsy and second, if he was a Jew. When he answered no to both questions, Grentz told him to show his "dick" to confirm if it was circumcised. Before they could do anything, Russian tanks approached the Castle and the Nazi forces were forced to do battle with Grutas's group retreating.

Out on the road, Grutas had Milko snipe two medics outside their ambulance which they stole to disguise themselves as they returned to the battlefield. Here, the group looted as many riches as they could find (which would help fund their rich lifestyle later in life) and Dortlich pointed out the SS Major from before laying against a disabled vehicle. Grutas approached, mocked the previous statement the major made and shot him in the head while taking his jewelry. It was then that they spotted a man running through the field and Grutas ordered the man be fired upon (as he was not "one of ours"). While their gunfire did not kill the man, the oncoming Russian tanks did and the group retreated with the riches they had obtained.

They eventually stumbled upon the lodge where Count Lector had brought his family. Outside were the remnants of a brief battle, with dead Russians and the adults from the Lecter family. Inside, the men found two children, with Dortlich mocking a young Hannibal that tried to fight him off. They tied up the children and used the radio to figure out their predicament, realizing that everything was blocked off around them they decided to stay. Their intention was to use the children as cover in case the troops found them, acting as "heroes" to further their other fabricated stories.

Days passed however and with very little food available, hunger began to drive their minds and Grutas decided that they should eat the girl (being a young Mischa Lecter) to survive. Dortlich sang an old Lithuanian lullaby to help the child stay calm as they walked her outside, with Grutas carrying the axe. She was murdered and later boiled in a pot, where they consumed her to survive the winter. Some time after, the lodge was attacked by a Russian tank and the group had to escape with Kazys Porvik trying to get him to wait as he grabbed the dog tags but was crushed under a support beam while the rest of the group escaped.

At some point during or after the war ended, Grutas was involved in numerous heinous acts made known to investigators. According to Inspector Pascal Popil he sawed off the head of the rabbi at Kaunus. He was also involved in further cannibalistic acts (some likely prior to Mischa's murder) and shot gypsy children in the woods. He also stood trial at the Nuremberg Trials but was able to walk free when a witness had acid poured down her throat.

With the riches obtained from the war, he grew himself in the criminal underworld and led a human-trafficking ring (as well as arms dealing). He retained control over the others, with Petras Kolnas and Zigmas Milko remaining close at hand.

Dortlich was murdered near the Lecter Castle by Hannibal Lecter, who then proceeded to Paris where he followed a lead on Kolnas. Arriving at his restaurant, he left half of Kolnas' old dogtag in Natayla Kleber's pocket which Kolnas found and contacted the others. When he found out Dortlich was murdered, he relayed this news to Grutas at his boat in the center of his human-trafficking operation. He showed concern over the situation, while Grutas retained a smug sense of power feeling the situation was minor. When he learned the name of the killer, he smirked and reminded the others that they "had dinner with him" during the war.

After Kolnas leaves, his expression changes and he heads into the backroom where some young women are being kept as slaves. Dieter is seen beating on a woman, whom he scolds that they should not be damaged in the face as it would effect their pricing and he claims the girl as his own. He returns to the bar, where he orders Milko to go to Paris to pick up a piano Kolnas has ready for him...as well as kill "the boy", feeling he needed to be dealt with.

Entering Grutas' property, Hannibal sets an improvised bomb and confronts him as he bathes, only to be interrupted by Grutas' guards. About to be killed, Lecter's bomb detonates and cuts the power, allowing him to wound the guards and escape in the chaos. Returning to Murasaki's home, Lecter receives a call from Grutas, who threatens to kill her unless he surrenders; overhearing ortolans singing in the call, Lecter breaks into Kolnas' home, and then heads to his restaurant.

Finding and reaching the boat, Lecter sneaks aboard but is wounded by the captain. Killing the guards and captain, Lecter rushes to save Murasaki, only to be shot in the back by Grutas, who boasts whilst molesting a bound Murasaki. Lecter removes his tantō, dimpled by Grutas' bullet, and uses it to cut Grutas' hamstring. With Grutas disarmed, Murasaki begs Lecter spare him for Popil, only for Grutas to mock him.

Taunting that Lecter drank broth made from Mischa, he suggests Lecter kills only to continue lying to himself; enraged, Lecter carves several "M"s into Grutas, fatally wounding him. Horrified by Lecter, Murasaki declares there's nothing human left inside him to love, and dives overboard. Detonating the houseboat with an improvised explosive, killing Grutas in the explosion. 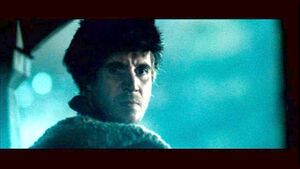 Retrieved from "https://villains.fandom.com/wiki/Vladis_Grutas?oldid=4392048"
Community content is available under CC-BY-SA unless otherwise noted.