Ruling Belarus with an iron fist.

Cover up his crimes and get acquitted at trial.

Kill Darius Kincaid and Michael Bryce to prevent them from testifying against him (both failed).

Vladislav Dukhovich is the main antagonist of the 2017 action comedy film The Hitman's Bodyguard.

He is the tyrannical President of Belarus, who is responsible for numerous atrocities and crimes which include massacres and genocides.

He was portrayed by Gary Oldman, who also played Count Dracula in Bram Stoker's Dracula, Drexl Spivey in True Romance, Norman Stansfield in Leon: The Professional, Egor Korshunov in Air Force One, Jean-Baptiste Emanuel Zorg in The Fifth Element, Carnegie in The Book of Eli, Dr. Zachary Smith in Lost in Space, Mason Verger in Hannibal, Lord Shen in DreamWorks' Kung Fu Panda 2, Ruber in Warner Brothers' Quest for Camelot, and Dreyfus in Dawn of the Planet of the Apes.

Vladislav Dukhovich was a ruthless warlord who ruled Belarus with an iron fist. He killed people who disobeyed him, including the family of Professor Asimov. His regime came to the end when the people of Belarus rose up against him, and he was arrested for committing crimes against humanity.

Before this, Dukhovich hired Darius Kincaid, a hitman who had troubled past as an employer, to kill his political rival who is human rights activist but when Kincaid learns that Dukhovich's rival had children, it reminded him of losing his own father whom that he was close to as a child.

Kincaid abandons his assignment and Dukhovich orders his secret police to massacre the village which horrifies Kincaid, as he sees innocent people being brutally murdered. He secretly takes photographs to provide the evidence of Dukhovich's crimes against humanity leading to get arrested by the authorities.

When Kincaid was expected to testify against Dukhovich for his actions, for the freedom of his incarcerated wife Sonia that he deeply loved, Dukhovich send his henchman to kill the witness and victims who tried to testify so prosecution will not proceed.

Fruitfully search the evidence before Michael Bryce, a special agent who hired for escorting Kincaid 's protection but unknown to Bryce, Assistant Director Jean Foucher had been working for Dukhovich as his second-in-command to help him & his goons track down where Kincaid went to hiding with Bryce in Amsterdam, while Dukhovich sent his henchman Ivan to murder Kincaid.

Kincaid tells Dukhovich he messed with his bodyguard. Dukovich didn't understand what he meant, but before he could ask, Kincaid kicks him off the balcony and he lands on a car, killing him. 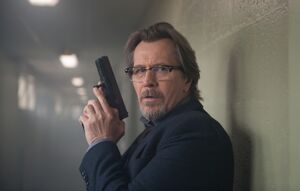 Dukhovich with his second-in-command assistant director Jean Foucher
Add a photo to this gallery
Retrieved from "https://villains.fandom.com/wiki/Vladislav_Dukhovich?oldid=3455589"
Community content is available under CC-BY-SA unless otherwise noted.