Help people in need with their inventions.

Prevent souls from escaping from the mugs.

Steal the soul of Leo and his friends by order of Baba Yaga to erase them from the map (all failed).

The Vodnik is minor antagonist in Las Leyendas. He can steal souls from just about anybody, he prefers doing so to children as their souls are normally purer than those of adults.

He was voiced by Carlos Hernández.

The Vodnik used to be human, but transformed himself via dark magic. Is a collector of souls. And apparently his victims become zombie-like, as is the case with Alebrije. By the time of this episode, He's been doing this for decades, possibly centuries, and has acquired a collection large enough to fit three whole shelves, each with over 20 souls.

Claims to be saving children from corruption by adults, but he himself is just as cruel as any normal adult would be. Can travel between bodies of water of any size regardless of physical connectivity; from lakes to puddles.

The Vodnik holds a great disliking to just about everyone but himself. He views humanity to be unworthy of his contributions and steals the souls of children because they're pure and innocent. The Vodnik hates Quetzalcoatl for taking almost all the Vodnik owned. The Vodnik is selfish and greedy, stealing Leo's food from him and eating it himself, he's also shown to be slovenly, eating food that's been in the ground without hesitation. Being a semi-aquatic creature, the Vodnik eats fishes.

Once a human toy maker who intended to use his inventions to help others, he eventually got fed up with the the impurities of his fellow adults, and turned himself into a frog-like monster with dark magic. Now he steals the souls of children, trying to keep them from corruption.

The Vodnik has had dealings with Quetzalcoatl in the past and appears to greatly dislike him, claiming he takes everything and leaves him with only the "crumbs". For possibly hundreds of years, the Vodnik has been stealing the souls of children, hunting them down through the waters and keeping them in his home to stay, and has apparently given some of his souls to Quetzalcoatl, though likely against his will.

In the episode that is titled with the same name captures Alebrije. Disguising his voice to be that of a gentle woman in peril to attract Alebrije, Vodnik used his kind and gentle nature against him. Vodnik is on the receiving end of this when Leo tricks him into consuming a magic potion that will compel him to answer three questions. The catch only two of the answers will be true with one of them being an outright lie. Given the simplicity of his objective, Leo elects to get around this obstacle by asking the same question thrice.

Once liberated, the souls of the children that the Vodnik kidnapped (along with Alebrije's soul) gang up on their former captor and drown him before returning to their bodies. 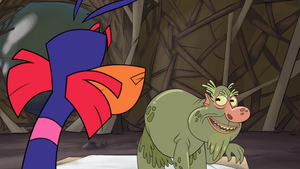 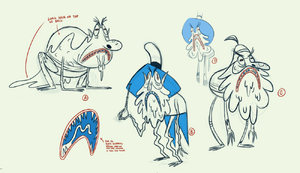 Older concept art of the Vodnik. 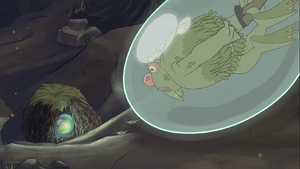 The Vodnik swimming up to a house in the depths of the lake.
Add a photo to this gallery

Retrieved from "https://villains.fandom.com/wiki/Vodnik_(Las_Leyendas)?oldid=4292509"
Community content is available under CC-BY-SA unless otherwise noted.