Valerie, also known as Volcan, is a major antagonist in UnOrdinary. She is a double agent for the government, who secretly hands out ability-amplifying drugs to criminals and kills superheroes.

Valerie always taught her nephew, Arlo to instill absolute faith in her, causing him to view her as a hero.

Near the start of the series, Volcan presumably kills a vigilante named X-Static, who is Remi's brother.

Valerie (under the disguise Volcan) makes her debut by meeting up with one of her customers, Alana. When she realizes this a ploy because Alana was blackmailed by Remi so she could capture her, she immediately kills Alana, using her fire claws before trying to kill Remi. Luckily, Volcan is overwhelmed once Remi's friends arrive to help her. After this, Volcan makes her escape.

Eventually, Valerie meets up with Arlo who lets Remi tag along with him. During this awkward meeting, Remi recognizes her and lets out her rage. Valerie is calm however, calmly explaining her job and such.

Later, she is seen in her office, asking one of her underlings, Kassandra, to keep tabs on Remi and her friends.

Valerie is a tall woman with blonde hair and gold eyes. She seems to wear heavy eyeliner with her hair in a tight bun.

As Volcan, she usually wears a black trench coat, mask, wide-brimmed hat and diamond earrings when she is operating.

Volcan is well described as a cold-blooded killer who shows no mercy. She is shown to be highly against all Superheroes. She is very straight to the point and does not toy around with her enemies. She also appears to be manipulative to a certain extent.

Flame Claws: Although the name of her ability is unknown, Volcan is able a very powerful woman capable of turning her hands into claws of fire. These are capable of both burning and slashing her opponents.

Superhuman Characteristics: Volcan is abnormally fast, strong and durable. She is able to withstand Remi's electric shocks and several other powerful blows. It is likely she uses ability amplifies to do this. 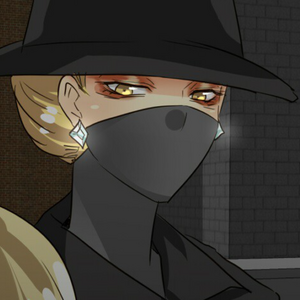 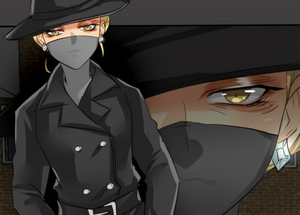