Firing napalm missiles from the top of his volcano mask

Kill off the Gorangers (failed).

Volcano Mask General Magman, sometimes translated as Fire Mountain Mask is a general of the Black Cross Army and a major antagonist in Himitsu Sentai Gorenger.

Magman was recruited from the volcanic Eldgja region in Iceland to replace Iron Mask Temujin after his many failures to kill off the Gorangers. He was a cruel and calculating despot who led the ruthless Funkan Gundan aka the Eruption Battalion) and commanded his own mobile battle fortress dubbed Navarone, named after the Nazi Cannons off the Greek Aegean Islands in World War II. He had the ability to fire napalm missiles from the top of his volcano Mask. He was virtually impervious to Gorangers' weapons and was a master combatant. His main attack was his Volcano Mask Rage Eruption.

However, Magman fell out with the Black Cross Fuhrer after blueprints for Navarone were discovered by the Gorengers, and thus the Fuhrer decided to revive Golden Mask to replace him. Magman decided to make one last attempt to destroy the Gorengers and went on a rampage with Navarone. The flying fortress was ultimately brought down when the Goranger Machines were crashed inside it, causing it to explode from within. However, Magman managed to escape and fought the Gorengers one final time. The Gorengers managed to defeat him by using Gorenger Hurricane to transform into an egg. Magman the boils using his head before eating it, causing him to explode.

The Navarone was Magman's underground fortress, capable of storing at least eighteen condolers at a time. The fortress was armed with four double-barreled main guns, a flamethrower at the base, and an energy barrier. The Navarone could also fly for quick escapes. 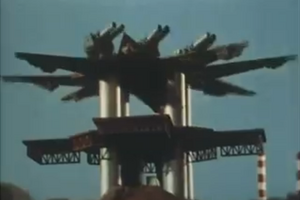 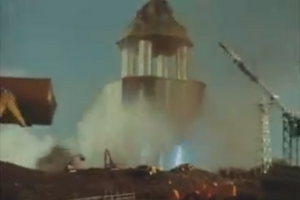 Navarone in its retracted state, often used for burrowing and used in flight mode.
Add a photo to this gallery

Retrieved from "https://villains.fandom.com/wiki/Volcano_Mask_General_Magman?oldid=3644284"
Community content is available under CC-BY-SA unless otherwise noted.