Capture all the tribe of the Sons of Kron to aid Volcazar (succeeded).

Volcazar's General is the secondary antagonist of the 2011 Danish animated movie Ronal the Barbarian.

He was voiced in Danish by Sven-Ole Thorsen, who also portrayed Thorgrim in Conal the Barbarian.

First seen spying the village of the Sons of Kron, he goes to inform Volcazar, whipping his butts in riding, that all the barbarians are reunited in their village, making them easy to capture. Volcazar then launches an attack. He orders him to bombard the village with their catapults. All the barbarians except the hero Ronal are captured under the general's supervision. When it is Ronal's turn to be embarked, the General mistakes him for a non-barbarian and orders his minions to kill him. The rest of the tribe is brought to Volcazar's lair. Volcazar's sorcerer Gu'ra Zul makes an incantation in order to access Zaal's temple. However, it fails because of the missing barbarian and the General gets brutally strangled by the tyrant who orders him to bring him back.

The General therefore goes in search of Ronal with a small contingent. They localize him in a small town called Orry Gorky. They enter the bar where Ronal is with his allies the apprentice bard Alibert and the Valkyrie Zandra. Seeing him, the General orders his minions to capture him but they are taken by surprise by Zandra. Wanting to subdue her, he is kicked against the wall and knocked off but hits a torch and it falls to the ground, causing a fire in the bar. When he regains consciousness, the flames reach the barrels containing 110% alcohol, much to his horror.

He survives and calls Volcazar to inform him that the last barbarian to be captured is protected by a powerful warrior. The tyrant angrily orders him to bring them to his lair. He obeys and decides to ride a sort of wyvern to better scan the surroundings. Spotting them during a night in the ruins, he manages to capture Zandra in a net. He then chases Ronal and Alibert but the two characters manage to squeeze through a small entrance in a rock. The wyvern tries to enter but does not succeed. The general gives up and takes Zandra to Volcazar, unaware that they ends captured by the Amazons.

He is seen again when Ronal is captured. He climbs on the altar with Volcazar and Gu'ra Zul and forces the Sons of Kron to do the same by whipping and hitting them with his foot. Alibert, having disguised himself as a Volcazar's guard, informs Ronal that he is there to help him. The general, suspecting something, turns to Ronal and asks what's going on but his suspicion is allayed when Alibert hits Ronal in the head with his ax. Overseeing the ritual, he notices Alibert in disguise who manages to free Ronal. In front of the barbarian who threatens him with Kron's sword, the General laughs at him and sarcastically orders him to lower his weapon because he could get hurt. Ronal tries to hit him but the general easily avoids the hit. Fortunately, Ronal accidentally bumps into the pillar he was attached to, knocking it down and causing a chain reaction that frees all the barbarians.

They revolt immediately and the General is attacked by one of them who takes him by the tits, spins him several times and throws him into the lava. 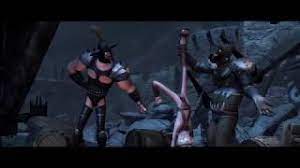 The General supervising the capture of the tribe of the Sons of Kron. 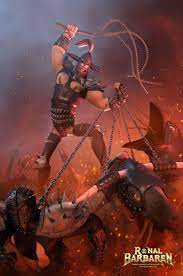 The General whipping his troops. 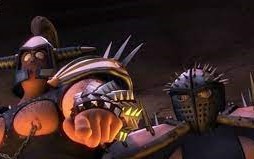 The General in company of a Volcazar's minion.

The General (in the middle) in the bar to capture Ronal.