Greater Fiend of Vazdah, Chief of the Lycanthrope Tribe

Demon God
Volf is one of the Greater Fiends of Vazdah and a villain from Ninja Gaiden II.

In ancient times, Volf was the ruler of an area of the Earth that became modern day Europe and like many of the other Greater Fiends, he claimed rulership over a tribe of humans. They would later become known as the Lycanthropic Tribe and eagerly worshipped and served Volf, as they fought to make the humans slave under him and later became monstrous werewolves. However when the Dragon Lineage rose up against the demons, the Ruler of Storms was trapped in eternal slumber, along with the other Greater Fiends.

But eons later, Volf was awakened by Elizébet with the demon statue, reawakening his lycanthropic fiends along with him. He proceeded to claim the Eclipse Scythe, a weapon made from the remains of a defeated lycanthrope king, forged from Wootz Steel, and bathed in a countless amount of human blood. Volf then took control of the canal city of Aqua Capital in Venice, Italy, and made the castle in the center of the city into his dark fortress. The Ruler of Storms began using humans as sport, making them fight his werewolves, however he soon grew bored as each human was easily torn apart. Volf ordered his minions to find him a worthy opponent and soon sensed Ryu Hayabusa of the Dragon Lineage, sending him an invitation to battle him. He began preparing a coliseum for their battle and eventually the Dragon Ninja arrived to be confronted by Volf, with his werewolves watching, who challenged him to a fight to the death. Despite the Ruler of Storms' power, Ryu defeated him and took his Eclipse Scythe, but the two were not finished yet. Volf resurrected in the Underworld and when Ryu went to stop the return of Vazdah, he was confronted by the Ruler of Storms again, this time no longer seeking to fight him for amusement and focused completely on slaying him, with a force of Fiend Centaurs aiding him. But Volf was defeated again, with his body turning to stone and crumbling away.

Volf is rather powerful due to being a Greater Fiend and an accomplished warrior, since not just anyone could possess the Eclipse Scythe. He can attack by driving his scythe into the ground to generate a shock wave, slash the ground to send out waves of force, and unleashing a wave of slashes around him. 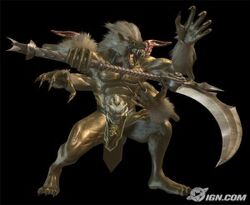 Retrieved from "https://villains.fandom.com/wiki/Volf?oldid=3531193"
Community content is available under CC-BY-SA unless otherwise noted.