Conquer Hyrule and defeat its allies.

Volga (in Japanese: ヴァルガ, Varuga), also known as the Dragon Knight (in Japanese: 灼熱凶戦士, Shakunetsu Kyou Senshi), is one of the main characters in the The Legend of Zelda spinoff sub series Hyrule Warriors. Acting as the secondary antagonist of its Prologue, Epilogue and Skyward Sword stories, as well as the deuteragonist of prequel Cia's Story.

He is Cia's proud, arrogant and powerful second in command, being an immensely strong and honorable albeit cocky warrior with the powers of a dragon who commands a legion of monsters along with Wizzro.

Volga was the general of Cia's army and one point he traded his soul to Cia for greater power.

Volga first confronts Link and the Hyrulean Forces after the Dark Forces lay siege to Hyrule Field. He arrives at the Abandoned Fort after the Hyrulean Forces attempt to secure it, initiating a fight. Link manages to beat him before Volga ends the battle and decides to kill Link for his interference. He attacks him with his transformed draconian arm, but is stopped by Impa. Volga attempts to burn the two of them with a fire blast but finds they have both survived by a magical barrier created from Link's Triforce of Courage that appeared on his hand. Volga then retreats, allowing the Hyrulean Forces to resume their counterattack and to open the Mine Entrance.

After Cia opens the Gate of Souls to the different eras, Volga travels to Skyloft in, where he leads the Dark Forces and terrorizes the inhabitants. He faces Link in combat again after Fi connects the islands of Skyloft with the help of Levias. Volga is eager to fight Link again, and just when he is about to be defeated, he mocks him as he grows stronger in strength and speed, He is however weakened after Link and Fi pray to the Great Fairy, who sends Fairies to bring Pumpkin Soup to Levias. Levias' empowered electrical blast weakens Volga, allowing Link to defeat him and he again retreats.

Volga again faces Link a fourth and final time at the Valley of Seers in the final battle against Cia. Cia summons him midway into the battle and fortifies him with her life energy. He demands to fight with the Allies' commander and charges after Princess Zelda. However, she attempts to reason with him instead of fighting, and questions him how he can find greatness in using dark magic to fight his battles. She tries to confess him that she needs him to be a noble knight, and not a pawn for the Dark Forces. Zelda's words manage to convince and bring Volga back to his senses, and he betrays his alliance to the Dark Forces as the dark power is pushed away from him. He resolves to fight Link one final time in a fair fight and readily advances toward him. Link defeats him again, and Volga admits his defeat but without regrets.

For most of Hyrule Warriors, Volga acts as Cia's combative subordinate who seeks to fight strong opponents. Differing from Wizzro, Volga is a powerful, honorable and influential warrior who faces his opponents head on. He is always confident and authoritative in his abilities to overcome all. He searches for strong opponents to combat and heats up any battle he is in. With his Dragon Spear and a bellowing war cry, Volga will strike opponents with heavy blows repeatedly.

Before his encounter with Cia, Volga was originally a noble and persuasive dragon guardian of the Eldin Caves who preferred to stay out of conflicts started by humans. During his final battle with the Hyrulean Forces, Princess Zelda is able to reawaken his noble spirit, undoing Cia's brainwashing. However, his code of honor causes him to choose to die honorably fighting the Hyrulean Forces one last time, making him a tragic figure. 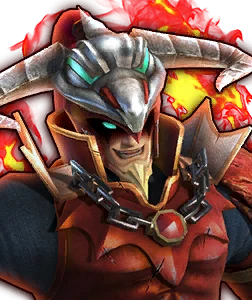 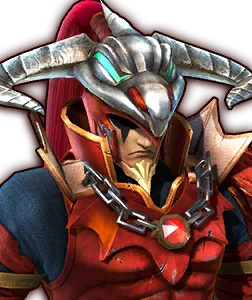 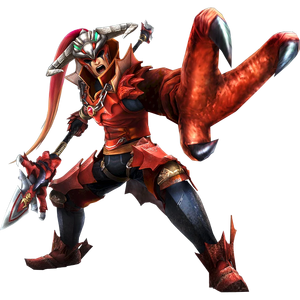