Freljordian Demigod of Battle and War

Return the old warlike practices of the Freljord

The Volibear, also known as Valhir or the The Relentless Storm, is a villainous playable character in the multiplayer online battle arena game League of Legends.

The ancient Freljordian demigod of war, the Volibear is the very manifestation of the storm itself. A wild, primal being, he wishes to destroy all traces of civilization so that humanity may once more live in the untamed wilderness.

He is voiced by David Sobolov, who also voiced Gorilla Grodd in The Flash, The Annihilator from Mighty Med, Shockwave in Transformers: Prime, Lobo in Young Justice and Injustice, Brawl in Transformers: The Game, Ripa 'Moramee in Halo Wars Dr. Fate in Injustice 2, and Kaido in One Piece.

Back in the old Freljord, when it was still known as Vorrijaard by the demigods of ages past, the Volibear was the living manifestation of raw, unstoppable power. Legends tell of his feats, carving the Five Fjords with a single swipe of his claws, and creating the first river from the blood of the wicked serpent, Rhond. Clad in the Runeguard armor from the forge of his brother Ornn, the Volibear was revered and worshiped as a hero among the first tribes, and the two brothers won many victories together.

When the Three Sisters (Serylda, Avarosa, and Lissandra) sought to take control of the land, the Volibear decided they must be destroyed, as the order they would impose would ruin his vision of a wild, untamed Freljord. In preparation for war, he gathered his most savage followers and asked Ornn to arm them for battle. However, Ornn refused, and in response the Volibear cursed his brother's name and cast off the Runeguard armor, pledging to his supporters that they would defeat the Sisters with nothing but tooth, claw, and thunder.

Although he blinded Lissandra in battle, the Volibear was unable to stop the Three Sisters from being remembered throughout history. Over time, the tribes of the Freljord would come to worship them instead of the demigods of old, building up stone walls, dams, and farms instead of hunting among the wilderness of nature. The Volibear watched this change in outrage, but was unable to respond as many of the weak mortals had stopped believing in him.

From then on, the Volibear vowed to tear down all traces of civilization so that he could free humanity from their weakness. The Freljord would be strong again when the old ways were remembered! It is only a matter of time before they believe once more...

In game, Volibear is a juggernaut-type character, using his powerful melee attacks and durable health to destroy enemies in the thick of battle. His passive, The Relentless Storm, improves his basic attacks the more he attacks, becoming faster and later producing chain lightning which hits nearby enemies. His ability Thundering Smash lets Volibear run on all fours towards enemies to stun and damage them, Frenzied Maul lets him claw and bite them, and Sky Splitter summons a powerful bolt of lightning from the heavens to deal area damage. Volibear's ultimate, Stormbringer, has him jump to a location to damage and slow enemies, disabling towers and increasing his size temporarily.

Savage and destructive, the Volibear is quick to anger and even quicker to answer to a fight. When Udyr and Sejuani approached the Ursine seeking the demigod's aid, they didn't need to pledge their services to him but instead won his support by attacking his ego, calling him a coward for refusing to help them otherwise. This shows that the Volibear is so stubborn in his beliefs that he will stick by them even when it doesn't align with his self-interest, just to ensure that his own pride is not damaged.

The Volibear values the wilderness above all else, and as a result harbors a deep resentment for civilization. When Ornn refused to arm the Ursine, the Volibear revealed a selfish and unforgiving side for not getting what he wanted, throwing away the armor his brother had given him in and holding a grudge for centuries. The Volibear is also shown to be very arrogant, as his power only exists when people worship him, and therefore he wishes to be worshiped at all times. However, when the Volibear kills Ornn in-game, his quote reveals he feels remorse, implying that deep down he still cares for his brother even if they are enemies. 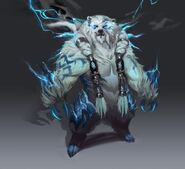 The Thousand-Pierced Bear in "Silence of the Damned".

Volibear and Ornn in "The Voice from the Hearth".