Spying on his enemies

Volrath is a phyrexian shapeshifter and major antagonist from Magic: the Gathering. He was originally a human named Vuel who was completed by the phyrexians and became the Evincar(phyrexian general) of Rath. While not the leader of the original phyrexians, he was a major threat during Magic's early lore.

Vuel was born as the son of Sidar Kondo in Jamuraa on the plane of Dominaria. When Gerrard Capashen was adopted into his family, Vuel was hostile at him at first, but the two grew close over time. Vuel eventually attempted to climb a huge and dangerous plateau as part of a rite of passage. Unbeknownst to him, Starke il-Vec poisoned the paint placed on his face which nearly killed him. Gerrard saved him, but because Vuel failed, he was banished from his tribe. Vuel resented Gerrard for not letting him die. While Vuel was wandering on his own, Starke fueled his anger and desire for revenge. Vuel lead an army of barbarians to destroy his former home killing many in the process. This included Sidar Kondo. Also during this time, Volrath deactivated the silver golem Karn and stole the Legacy Artifacts.

With his rage invigorated and his lust for power in full view, Vuel fallowed Starke into his portal. He was transported from Dominaria to the artificial world of Rath. There he meet the leader of the phyrexians Yawgmoth. Yawgmoth showed Vuel the power he could achieve if he submitted to Phyrexia. Vuel agreed and was completed and transformed in Volrath. He was given shapeshifting powers and could manipulate flowstone. He also became the Evincar of Rath and was in charge of all of the phyrexians on the plane. Years later, Volrath set a plan into motion to destroy Gerrard as well as destory the Legacy Artifacts. He kidnapped Sisay the captain of the Skyship Weatherlight to bring the ship to Rath. Once the ship arrived, the phyrexian Flagship Predator helmed by Greven il-vec intercepted the ship. Once the battle was over, the minotaur Tahngarth and Karn were kidnapped, the Legacy Artifacts we kept safe, and Gerrard fell to the forest bellow. Volrath knew that Gerrard survived and would plan a rescue. Volrath watched as Gerrard infiltrated his Stronghold and sent waves of minions to fight him and the rest of the crew. Volrath's forces managed to cripple the entire team except for Gerrard and Starke. After his minions were vanquished, Volrath appeared with Sisay and Starke's daughter Takara who were mind controlled. After the two were freed, Gerrard vanquished Volrath and the Weatherlight Crew escaped. It turned out that the Volrath that was killed was another shapeshifter and Volrath was disguised as Takara. Volrath escaped with the crew undetected. Around this time, he also transported many Slivers to Rath.

Volrath traveled with the Weatherlight Crew to the Plane of Mercadia. Still Disguised as Takra, he sowed the seeds of discord among the group. He got his revenge on Starke and murdered him. He then attempted to steal the Weatherlight but was confronted by Gerrard. The two fought with Volrath being severely injured. He managed to recover and pursued the Weatherlight in the Recreant, but he was foiled again. After his defeat, he retreated to Rath to plan his next move.

Once Volrath returned to Rath, he learned that he lost his title and it was being fought over by Greven, Ertai and Crovax. Wishing to keep his power, he challenged Crovax to a fight in the arena. He has the advantage during the fight's beginning, but when Crovax gained strength when he murdered some spectators. Before Volrath won the fight, he was disoriented thanks to Ertai. Crovax gained the upper hand and one the battle. During Corvax's coronation, Volrath was stripped of his phyrexian attachments and became Vuel again. Ertai injected Volrath with a huge dose of flowstone which dissolved him from the inside out. During his final moments, Vuel saw Dominaria's sky and witnessed the beginning of phyrexian invasion.

Much later, the demon Belzonlok and The Cabal made their base inside Volrath's Stronghold. In his mission to rewrite history, Belzonlok took credit for being the Evincar instead of Volrath. 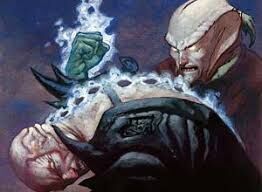 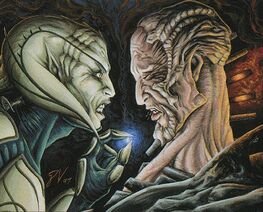 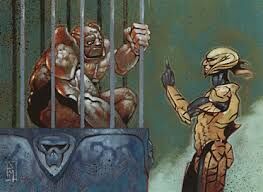 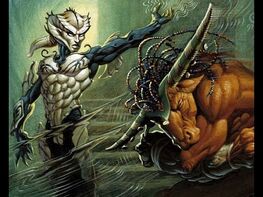 Volrath torturing Tahngarth
Add a photo to this gallery
Retrieved from "https://villains.fandom.com/wiki/Volrath?oldid=3713473"
Community content is available under CC-BY-SA unless otherwise noted.