Founder and member of the Green Lantern Corps (formerly)

Guardian of the Universe (while possessing Rami)

Bring peace to the universe (formerly).
Annihilate the Malthusians for betraying him due to his pride.
Destroy the Guardians of the Universe and Green Lantern Corps in vengeance for their betraying him.
Corrupt Jessica Cruz and steal her life force (the part of Volthoom resting within his ring; failed).
Steal the First Green Lantern Ring from Jessica Cruz to use its power.

Volthoom was an ancient being with the ability to warp reality, born on an unnamed world which was about to be destroyed in the reality of Earth-15. Jumping from universe to universe, Volthoom traveled desperately to find a means to save his planet and people from being destroyed. After arriving on Prime Earth, he was taken before the Guardians of the Universe, who offered him a position as their agent, known as the First Lantern. However, Volthoom eventually grew prideful and frustrated with the Guardians' manipulation, especially after learning that, in order to keep Volthoom in their universe, the Guardians had destroyed his Travel Lantern. Enraged, Volthoom massacred the Guardians, wiping out their home planet and killing the vast majority of their species. He was imprisoned in an unbreakable chamber and wrote out of the Guardians' history as punishment, after being defeated by the first six green lanterns.

After the War of Lights, the Guardians, as part of a plan to replace the Green Lantern Corps, moved Volthoom into lesser constraints. Using Volthoom's DNA, the Guardians created the Third Army, a horde of infectious warriors that nearly assimilated all sentient life in the galaxy before being stopped by the Green Lanterns.

The Guardians later inadvertently freed Volthoom, who captured them and attempted to siphon energy from the Green Lanterns in an attempt to gain enough power to rewrite the universe. However, he was ultimately defeated by the Lantern Corps. He was weakened by Nekron and separated from his connection to the Emotional Spectrum by Hal Jordan. Utterly powerless, Volthoom was killed by Nekron.

In Green Lanterns, it was revealed that Volthoom had survived this ordeal, but lost his physical form, instead appearing as a spiritual being who manipulated Frank Laminski into becoming the Phantom Lantern, before possessing the body of the guardian of the universe Rami, and setting about manipulating Earth's Green Lanterns Simon Baz and Jessica Cruz, so that he could enact revenge on the Green Lantern Corps. 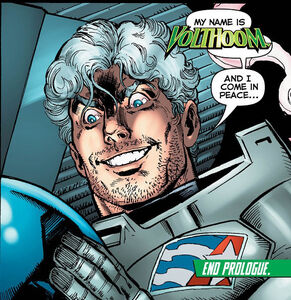 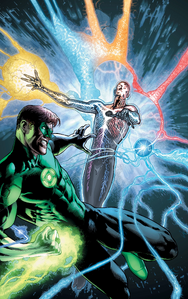 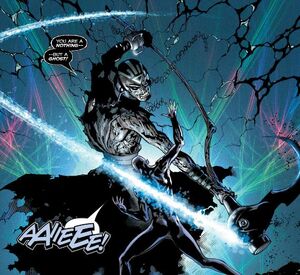