Von Nebula, formerly known as Von Ness, is the dark and mysterious leader of various villains within the Hero Factory Universe. He serves as the main antagonist of Hero Factory.

Von Nebula is voiced by Mark Hamill in Rise of the Rookies.

Created in the Assembly Tower, Von Nebula was once a Hero from the Hero Factory, under the name of Von Ness. He was a part of the original Alpha Team lead by Thresher. He traveled with the rest of the team (minus Thresher) to a prison which was under attack by the Legion of Darkness, led by Black Phantom. He was with Bulk on the surface of the asteroid while Stormer and Stringer where in a drop ship above. He went onto the roof to stop XT4, Toxic Reapa and Voltix from escaping that way. However, he realized that he did not choose to be a Hero and that this was not his fight so allowed the villains to escape, this began his path to becoming a villain.

After this failure, it was decided that Hero Factory would be shut down, something that Von Ness didn't appear to mind too much. He then left on a transport with Bulk and Stringer while Stormer and Thresher remained behind. Hero Factory was then attacked by the Legion of Darkness and he returned with Bulk and Stringer to fight them off. After they won the battle, it was decided that Hero Factory would not shut down, this was not received well by Von Ness.

They were later sent to New Stellac City to stop a burglary in progress, but found a giant Drone attacking the city. During the battle, Thresher was badly injured while protecting the Rookies. Von Ness was ordered to protect Thresher while Stormer went for the Drone. Instead, Von Ness attempted to escape in a Drop Ship, and when Stormer leapt on and tried to stop him from leaving, the coward shook him off. Von Ness blamed Stormer for what had happened and vowed revenge.

Von Ness was mysteriously transformed during the subsequent time period and also gained the Black Hole Orb Staff, becoming Von Nebula. Von Nebula recruited numerous Villains to his cause. He even destroyed a child's house, escaping before Hero Factory came. Von Nebula later led his villains to the Deltari Quadrant, where they cut communications and stole their palomino diamonds. Next, he put his plan into effect by dispatching XPlode and Rotor to hijack a shipment of C-4000 explosives on Merak 9. When this failed he sent the pair to rob an Explosives Plant on Lemus 2, though they were ordered to not really do any damage besides worry the Hero Factory. He then sent Corroder to attack Penitentiary 1331, a prison under construction on Tantalus 5. Once again the henchbot was ordered to avoid doing too much damage. Lastly, Von Nebula sent Meltdown to poison Stormer with nanobots, causing the Hero to go berserk. After Stormer was cured, Von Nebula decided to target New Stellac City for the final part of his plan.

First, Von Nebula issued out a false alarm meteor strike warning, to gain the Alpha 1 Team's attention, then he sent Corroder and Thunder down with a Nebula Gas Cannon. He later dispatched XPlode and Meltdown as well. When Von Nebula revealed himself at New Stellac City from his black hole base, Stormer, followed by William Furno, willingly let themselves be sucked into a black hole where they knew they would face Von Nebula. Von Nebula stripped away their weapons and devices and began draining their Hero Cores.

The Heroes, however, retained their built-in Anti-Gravity Thruster Rings and began plotting to reverse the effects of the vortex. Von Nebula returned and demanded the rings, attacking Stormer because he knew "Stormer always has to take the glory". However, it was Furno who held the rings, and he threw them into the center of the black hole to destroy it. Stormer then seized the Black Hole Orb Staff and sucked Von Nebula into it. Stormer and Furno escaped the black hole, and brought the staff with them to the Hero Factory.

Shortly after heroes Furno and Rocka seemingly arrested Voltix far too easily, Voltix appeared to release some sort of entity of Von Nebula which shattered the orb on his staff; freeing him and creating a giant vortex allowing the other imprisoned villains to escape. After escaping the prison via the destruction of his own weapon, Von Nebula went into hiding. Later, Mr. Makuro realized someone had stole the blueprint of Hero Factory during the prison break and Black Phantom's invasion. It is revealed to have been Von Nebula, who had stored the blueprint on his laptop in his new lair. 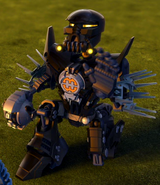 Von Nebula's defeat
Add a photo to this gallery

Retrieved from "https://villains.fandom.com/wiki/Von_Nebula?oldid=3545322"
Community content is available under CC-BY-SA unless otherwise noted.