Abusing his soldier, Schultz with a mallet

Get rid of Daffy Duck so that his career as a commander will not be discontinued (succeeded, but unintentionally launched Daffy into Berlin).

Von Vultur is the main antagonist of the cartoon episode Daffy - The Commando.

Von Vultur gets a telegram from the "Gestinko Gestapo", threatening him with his ka-rear if he lets "Vun-More-Kommando" through. The telegram in translated English reads 'vun more kommando ...'. In the original, very broken German, it reads, "Dummy! A sauerkraut potato soup isn't eaten made with veal." He signed the apes of history. From left to right, the "Apes of Wrath" are Hitler, Hirohito, and Mussolini. The music playing is from Wagner's opera Das Rheingold. Hearing a plane overhead, he calls in a soldier, Schultz, whom he abuses by knocking him regularly over his helmet with a mallet. Schultz and Von Vultur go outside and use a searchlight to look for Daffy, who is floating down on a parachute, whilst singing in a Cockney accent.

After a quick "Put out those lights!" gets the lights out, Daffy uses his fingers to make shadow puppets and dancing chorus girls. When Von Vultur chases Daffy behind a curtain of asbestos, Daffy makes a face similar to the stereotypical Japanese faces used in cartoons at the time (see, for example, Bugs Bunny Nips the Nips), causing Von Vultur to run off frightened.

Back at his bunker, there is a semi-nude photo of a woman on the wall in Von Vultur's bunker. Daffy addresses Von Vultur as "Liederkranz", after the smelly cheese, is presented with a bomb from Daffy, ticking down. Von Vultur hands the bomb off to Schultz, who is blown through the roof. When Schultz falls back, Daffy stops Von Vultur from hitting Schultz over the head with a mallet and instead hits him. Von Vultur (pausing briefly to salute a skunk with "Heil Hitler!") chases Daffy to a telephone booth, which Daffy possibly calls it a "Telefunk" booth, where Daffy continues to make fun of Von Vultur. The telephone booth scene has Von Vultur thinking he was talking to Schultz but finds himself talking to operator Myrt from the Fibber McGee and Molly radio show.

Daffy then jumps in a plane, narrowly avoiding being shot by "a mess of Messerschmitts" referring to the Nazi Messerschmitt BF 109 Light fighter aircraft, when he is shot down by Von Vultur (his plane literally being blown to pieces). Daffy then runs into a howitzer and is shot out by Von Vultur. However, Daffy flies (as the 'Human Cannonball') into Berlin, where Hitler is making a speech to his people. Daffy jumps up and whacks Hitler on the head with a mallet, causing Hitler to yell for Schultz, similar to Von Vultur.

It is completely unknown what happened Von Vultur afterwards.

Von Vultur is a brown anthropomorphic vulture with an orange beak and black feet. He wears a green military suit and white gloves. 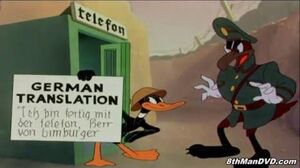