The Vorash, also known as the Burning Lava Fish, is a colossal fish-like creature encountered as a major boss battle in Metroid: Other M. It is seen always dwelling in bodies of lava.

First spotting the sea beast in a Pyrosphere tunnel, Samus Aran followed a Vorash and battled it in an ocean of lava, littered with obsidian platforms. A long time after the confrontation, the two battle again in the Blast Furnace Observation. Samus comes out victorious yet again, and watches as the lava beast sinks into its natural habitat, never to be seen again.

During the Vorash's boss battle, Samus has to avoid Vorash's boulders that it throws, in order to attack it, Samus has to shoot its eyes so that it becomes distracted, then drag it down with her Grappling Beam, and considering it earlier ate a pod that got stuck in its mouth, Samus is able to damage Vorash's underside after that.

After a while, it swallows the pod that was stuck in its mouth, which makes it so that Samus has to damage it while the Vorash is leaping or charging for an attack, she may also grapple a grapple point, this makes Vorash jump out of the lava and, if done correctly, makes Vorash eat the grapple point, which defeats Vorash.

While not appearing the game as a stage hazard, Vorash does, however, have a trophy in the game, and its theme can be used on the Pyrosphere stage. 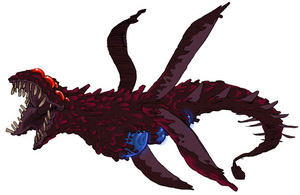 Concept art of the Vorash. 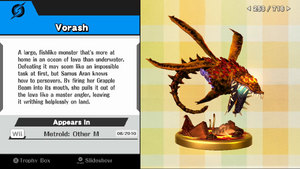 Super Smash Bros. for Wii U trophy of the Vorash.