Capable of surviving in an oxygen atmosphere

Destroy all 'tainted' by Shadows.

The Vorlons were villains from the 1994 Science Fiction series Babylon 5.

The Vorlons were one of the older races of the galaxy, and, along with the Shadows, were one of the last to become associated with an organization known as the First Ones. When a majority of the First ones left, the Vorlons and the Shadows remained as one of the few sentient races in the galaxy. When they saw new sentience evolving, the Vorlons desired to put that life under a strict code of order. The Chaotic Shadows disagreed. At first the two races had respected each other's positions and had rules of engagement. At some point one or both races decided their way was the only way and the two races went to war.

Each time the Shadows came out to fight the Vorlons the Vorlons would gather allies amongst the younger races and force the Shadows to retreat back to Za'ha'dum. Knowing that Shadows were vulnerable to telepaths, the Vorlons went from planet to planet engineering life to possess telepathy, often meeting those species in their visits. The Vorlons were seen as gods for so long that they started to believe that they truly were gods.

In the TV series Babylon 5, the Vorlons communicate mainly through their ambassador, Kosh. They did appear in other instances, such as when they killed Deathwalker - feeling that lesser races were not ready for immortality.

In Seaon 4, the Vorlons finally revealed the full extent of their military forces. The Vorlons released a planet killer weapon in order to rid the galaxy of the Shadows. Such was their desire to kill Shadows that the Vorlons would destroy any planet with even a trace remaining of Shadow influence, no matter how many sentient beings were present when the planet was destroyed. The Shadows meanwhile deployed their own planet killer. The younger races found themselves caught in the middle.

During a decisive battle at Coriana VI the First One Lorien, with help from John Sheridan and Delenn, managed to convince the two races to cease their pointless fighting. The Vorlons, Shadows, and all the other remaining First Ones then left the Galaxy with Lorien to join the other First Ones in intergalatic space.

The Vorlon homeworld was left abandoned following the Vorlon's departure from the galaxy. One million years later humans - who had themselves evolved into energy beings and became First Ones in their own right - moved to the old Vorlon homeworld, renaming it as New Earth.

Vorlons as they appear to lesser species 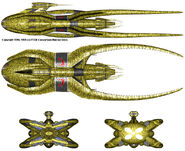 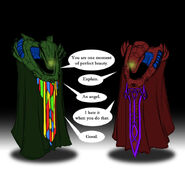 2 Vorlons conversing as usual
Add a photo to this gallery
Retrieved from "https://villains.fandom.com/wiki/Vorlons?oldid=3053655"
Community content is available under CC-BY-SA unless otherwise noted.