Voxy (by Mya and Nerdry)

Kilano (name of his alter-ego)

Coming up with ideas for Mantyz to free himself from the Void of Silencia as much as possible.

Escape from the Void of Silencia, get revenge on Sugar Che for imprisoning him 30,000 years ago and destroy FreeFonix failed so many times, succeeded only once)

Vox is an evil Sonic Lord that served as the main antagonist of the FreeFonix TV series.

He was locked away in the Void of Silencia by Sugar Che who he had battled many a time. He has also fought Diva and put a curse on her voice which was eventually broken. He also plans to rule the world without Mya and vice versa. In the episode Land of the Lost he shapeshifts into a human like form and changes his name to Kilano in order to trick Freezbone into setting him free.

Vox is usually frustrated about being trapped in Mya's mirror and unable to do anything. When Mantyz played in the first episode, it enabled Vox to use the mirror as a window from the Void of Silencia into Mya's office. Having only Mya to chat to most of the time understandably irks him a little and he always revels in any bad luck that comes her way. However, even though he's trapped there, he is still very imposing and can be pretty scary when he's angry.

In the episode Everybody Was Polka Yodel Fighting Vox was able to get out of the Void of Silencia thanks to CC and Dee Dee the Polka Yodels, he killed Sugar Che and all of FreeFonix in BB's dream. 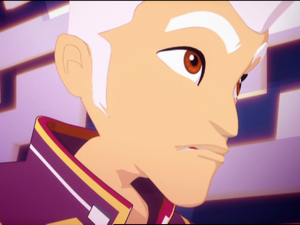 Vox as Kilano
Add a photo to this gallery
Retrieved from "https://villains.fandom.com/wiki/Vox?oldid=3545328"
Community content is available under CC-BY-SA unless otherwise noted.