Owner of his multimedia

Being the center of attention

Vox is one of the main antagonists of the adult animated black comedy web series Hazbin Hotel. He is an overlord of Hell, Alastor's arch-enemy and a member of The Three Vs along with Valentino and Velvet. He appears in the second chapter of the prequel web comics, which is centered on Alastor, as well as a brief cameo the pilot episode.

While he has not been given a speaking role in the pilot episode, Vivziepop's head canon voice actor for Vox would be Mark Hamill, who famously played Luke Skywalker from the Star Wars franchise and The Joker in the DC Comics properties.

Vox is shown to be a slim, technology-themed demon standing at about 7'00". He wears a striped tuxedo, a black and red striped shirt, a red bow tie, a whiteish blue undershirt, and a black top hat with a red a broadcast symbol, a blue radio wave, and his antennas out of it. He has a flat screen TV for a head, his eyes are red with light blue pupils, his left eye has a jagged pupil, he has light blue teeth and and has what appears to be blood flowing from the left side of his mouth.

Not much is known about Vox's past. Vox was once a normal human in the 1950s but after he died by an unknown cause, he was reborn in Hell as a powerful demon and later became one of the overlords of Hell. At some point in time, he met Alastor and they became rivals.

In the pilot episode "That's Entertainment", Vox is first seen hiding from the Exterminators alongside Valentino and Velvet, with the latter taking a picture of him to his dismay. Vox and the other overloads of Hell later appear in a flashback when Vaggie tells Angel Dust who Alastor is.

A Day In The Afterlife

Vox is seen advertising his products to two men on TV at the TV station. When Alastor comes by, the two men flee from him because he is one of the most powerful demons in hell and Vox stares at him though the TVs screen as well as take over the broadcast to show himself on all the screens. Alastor then calls Vox a show off and walks off as Vox continues too stare at him.

While Vox's personality remains unknown, the writers of Hazbin Hotel have confirmed that his personality has been described to be the opposite of Alastor's. He is also said to be either Bi or Pansexual.

He stalks Alastor and appears to lust after him.

He feels sympathy for Angel Dust due to sharing similar abuse from Valentino on a similar basis and once mocked Valentino on Instagram on Angel's behalf, indicating that he has something of a compassionate side.

Vox is one of the most powerful lords of Hell and is on top of one of the villain/overlord hierarchy. He could cause a Blackout in all of Hell if he wanted to and, like all Demons, can transform into his full demon form. The Alastor prequel comic reveals that he can see and hear people through tv screens as well as take over the broadcast to show himself on all the screens. 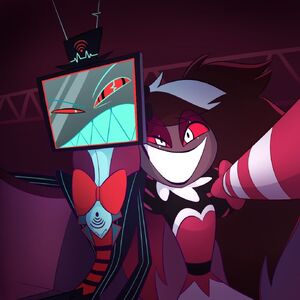 Velvet taking a selfie with Vox. 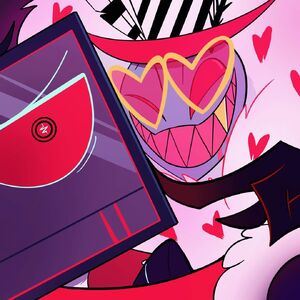 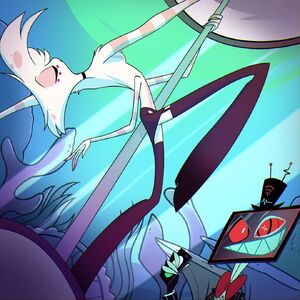 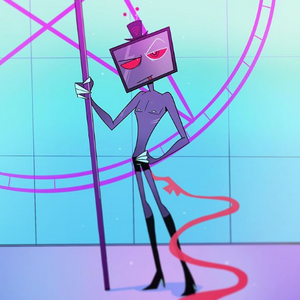 Vox being forced to pole dance. 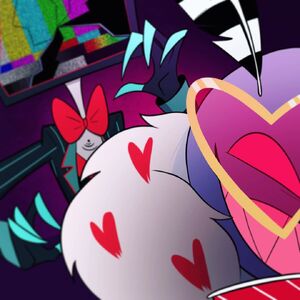 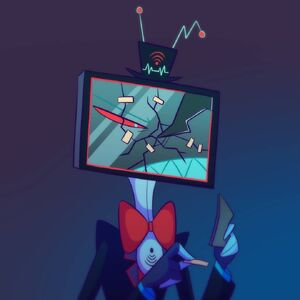 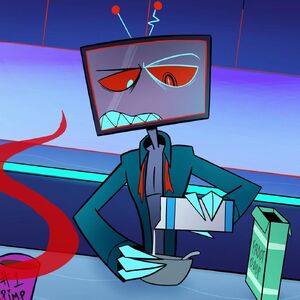 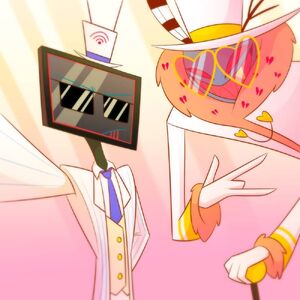 Vox and Valentino in white and gold clothes. 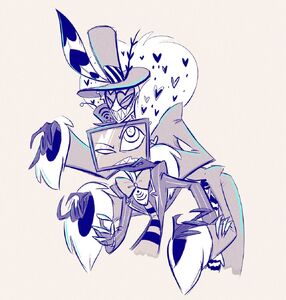