Revolt against the Founders.

Retrieve Elizabeth and use her for their own agenda.

The Vox Populi (Latin for "Voice of the People"), The Vox (for short) or "The Anarchists" (as referred to by the richer part of Columbian society), are a diverse underground anarcho-communist resistance faction in Columbia that are in-direct conflict with its governing body, The Founders. After the city-wide incident years before, the citizens of Columbia began to split into two factions: the Founders and the Vox Populi.

Led by Daisy Fitzroy, the Vox Populi first began as a protest group and a confederation of like-minded citizens and foreign immigrants desiring better treatment, but as it became more organized its members grew more militant. The movement eventually abandoned its initial peaceful message in favor of retaliatory violence against the ultra-nationalist faction. They believe in communist ideals of everyone sharing everything, which eventually comes to mean that everything should belong to them.

Much like the Founders, the Vox Populi want Elizabeth for themselves, either for her gifted abilities for their own agenda, or to possibly kill her. Like many groups throughout history, "Vox Populi" soon fragmented into several splinter groups over various internal ideological differences. Ironically, these internal factions are often more devoted to destroying each other than uniting against their common enemy.

In the end Daisy became so obsessed with fighting monsters that she became one herself, as she was willing, even eager, to kill even the families and children of their oppressors.

The Vox Populi are frequently referenced when Booker arrives at Columbia, they along with their leader Daisy Fitzroy are the subject of several carnival games promoting the hunting of them. Columbian residents mention them often in conversations and are openly worried about them and their intentions.

The Vox Populi are first seen after Booker DeWitt takes over the First Lady's Aeroship. While Elizabeth tries to take the airship to Paris, the Vox Populi (who have commandeered an air skiff) take it over as a mobile hospital and promptly knock Booker unconscious. When Booker comes to, he finds the Vox have taken over the dirigible and have no intention of giving it back unless Booker can retrieve weapons from a local Chinese gunsmith, Chen Lin, and bring them back to the Vox. When they reach Lin, they discover he has already been caught and murdered by Columbian forces.

Elizabeth attempts to open a tear to an alternate Columbia in an attempt to bring Lin back to life, however they are transported to this version of Columbia instead. Here the Vox are much more of a threat to the Founders and are currently engaged in a bloody civil war with them.

In this alternate Columbia, Booker has died and the Vox hail him as a martyr for his actions against the Founders. However, when Fitzroy learns of this Booker she sends out Vox gunmen to kill them, unable to believe they are back from the dead. As Booker and Elizabeth blow through waves of Vox enemies, they eventually reach the top of Fink Manufacturing's factory complex where Fitzroy has murdered Jeremiah Fink and is holding his young son hostage. With Booker's help, Elizabeth is able to reach Fitzroy and kill her before she can kill Fink's son.

Word of this eventually reaches the Vox, in a blind rage they take out their anger on Booker and the rest of Columbia. Columbia is ravaged and a presumably large amount of its citizens murdered in the carnage. Vox forces chase them to the First Lady airship and attack Booker and Elizabeth, intending to destroy the airship before it can make it back to Monument Island. Booker and Elizabeth, with Songbird's help, defeat the Vox and presumably send them running.

With the destruction of Comstock at the end of the game, the Vox Populi's fate is left as ambiguous at best; however, considering that Columbia only existed whilst Comstock did, they could be presumed deceased or (in theory) nonexistent. 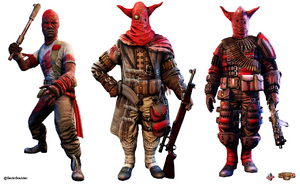 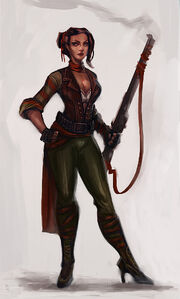 Concept art of a Vox soldier 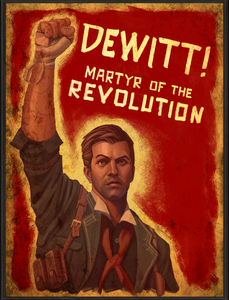 Propaganda proclaiming Booker as their martyr 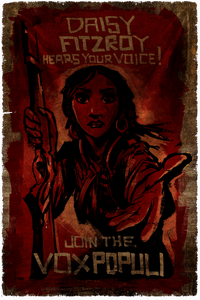 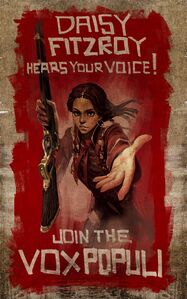 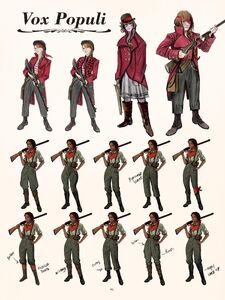 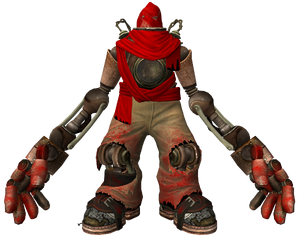 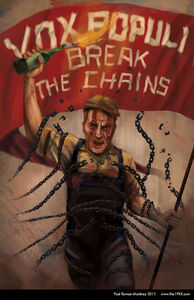 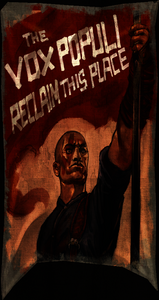 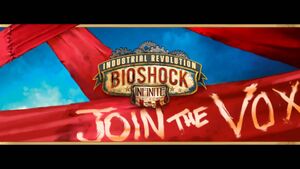 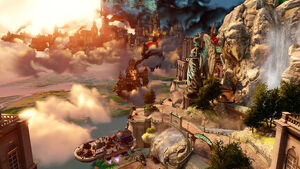 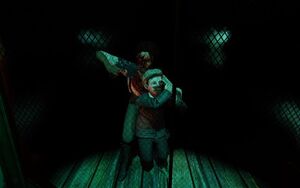 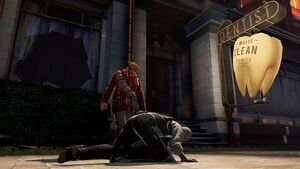 A Vox revolutionary beats a dentist 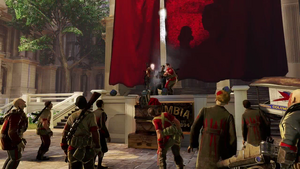 The Vox attempt to execute a postman 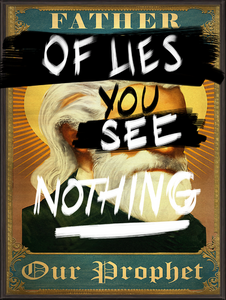 Vandalized Founders' propaganda
Add a photo to this gallery

Retrieved from "https://villains.fandom.com/wiki/Vox_Populi?oldid=3985871"
Community content is available under CC-BY-SA unless otherwise noted.